Full-size truck-style SUVs are no longer the big sellers they were once were, nor, as many predicted, have they gone away entirely. And, lower gas prices have caused their sales to tick up so far this year. Let’s face it, despite less than stellar fuel economy, some people just need a really big SUV! So it goes without saying, rigs like the Infiniti QX80 had better be able to get the job done.

Whether it’s for towing big toys, or just hauling loads of gear to your favorite getaway location, full-size SUVs like this 2016 Infiniti QX80, perform tasks that 3-row crossovers just can’t get done.

And this “biggest of the QXs” is a heavy throwback beast of an SUV. Made in Japan and based on the global, full frame Nissan Patrol, you have to climb up into the QX80, and it really does feels like you’re driving something massive. But then, that’s also part of its appeal.

It’s also very luxurious; and a vehicle capable of taking you just about anywhere and towing just about anything. Actual towing capacity is 8,500-lbs., about the same as the Chevrolet Tahoe and rival Cadillac Escalade, but less than the Ford Expedition and Lincoln Navigator.

Doing the pulling, is Nissan’s familiar 5.6-liter V8. Here with 400-horsepower and 413 lb-ft. of torque. Hit the gas and you do get a full V8, but the feel is not as sophisticated as the recently updated GM and Ford full-size utes. 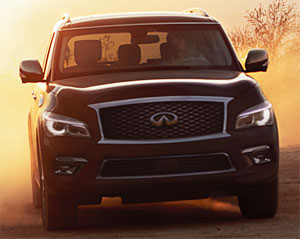 Still, power is power, and there was plenty enough here to get us to 60 in 6.7-seconds. It’s a bit of a surreal experience; as even at wide open throttle, there’s almost no intrusive engine noise.

Transmission is a 7-speed automatic.  Shifts are buttery smooth, and you can trigger them yourself; there’s even downshift rev matching. Not that we were downshifting in the ¼-mile, rather keeping it pinned; getting to the end in 15.1-seconds at a good 94 miles-per-hour.

It truly has more of an old school, floaty yet still solid feel through the cones; with accompanying light yet numb steering. But there was not as much roll as we expected.

We consider a 119-foot average stopping distance from 60 quite good for a beast of this stature. Stops were consistently smooth; with little nose dive, and zero drama.

Despite its throwback nature, the QX80 has a modern look to it, even though it hasn’t changed much since it first arrived as the QX56 for 2011.

There’s a very tall front end with prominent grille befitting its large stance. Opt for Limited trim and you’ll be riding on 22-inch wheels attached with an automatic self-leveling suspension. 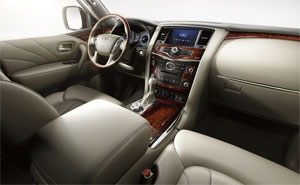 Running boards with welcome lighting are also included, but they seem to be the type that get in your way more than aid with getting in and out.

There’s plenty for old-school SUV buyers to love inside, including the extremely comfortable front seats. A 3-person bench is an option for the 2nd row, but it’s actually captain’s chairs that are standard here, as is a 3-passenger 3rd row.

Limited trim gives most of the bells and whistles you might want. And the familiar Infiniti/Nissan layout means there’s a plethora of controls on the center stack, and also a touchscreen for more in depth control of audio and navigation.

And there’s even a central controller as well. So you have plenty of options for commanding your vessel. Both the leather and wood trim are impeccable. 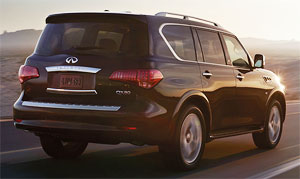 It’s a thirsty rig for sure. Government Fuel Economy Ratings are 13-City, 19-Highway, and 15-Combined. But we averaged a better than expected 18.2 miles-per-gallon of Premium. That’s still a very poor Energy Impact Score of 22.0-barrels of annual oil consumption with yearly CO2 emissions of 9.8-tons.

This 2016 Infiniti QX80 is certainly big and capable; but it’s not quite as bold and brash as Escalade or Navigator. Plus, what it lacks in modern street driving habits, it makes up for with passenger pampering. Still, it easily reminds us of the rough and ready throwback on which it is based. And, that’s what we love about it the most.