Jaguar has been on a roll lately, whether you’re talking about setting the pace in the F Pace or building our type of thrill ride with the F Type. Now they turn their efforts towards the more traditional XF midsize sedan. So, let’s see if they can continue to set their type of pace.

While the Jaguar F-type and F-Pace have certainly drawn lots of attention to the brand, its cars like this 2016 Jaguar XF that will truly have much more of an impact on the brand’s long term success.

Like most recent Jags and the trend of cars in general, this 2nd generation XF has dropped some pounds, riding on a new aluminum structure.

But it’s the powertrain options that are the biggest talking points about this new XF. That being the F-type’s supercharged 3.0-liter V6 available in two levels; base 340-horsepower and in upgraded S version with 380.

Both variations get an 8-speed automatic transmission with available all-wheel-drive. A diesel option will follow shortly. 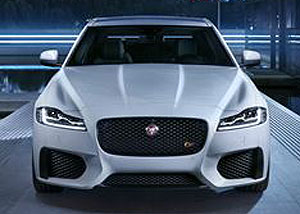 Our early drive time in Arizona was mostly spent in the more powerful XF S; and we found plenty of get up and go, no matter where we got up and went. Still, that muscle is delivered in a more civilized fashion than with brute force.

Like most vehicles, the XF has made the switch to electric power-assisted steering; and here we loved it. There’s plenty of feedback, along with a nice and direct feel. BMW take note!

We expected to see some improvement in handling, but we got even more than we anticipated. That lighter and stiffer chassis, along with the F-type inspired double-wishbone front and integral link rear suspension, provides a very agile feel, and should be just what was needed to make the XF much more competitive with its German rivals.

Ride quality equally falls on the firm side of things; not harsh, but surely stiffer than the typical American buyer will anticipate.

The ZF 8-speed is still good as it gets, delivering smooth and fast shifts no matter your driving style. Jag puts 0-60 right at 5.0-seconds. JaguarDrive Control offers a typical range of driving modes.

And, during our drive we did not find an extreme level of isolation, or disconnect. Still it was very quiet inside. The throttle is very aggressive, especially in sport mode. But unlike the boisterous F-Type, a fairly tame exhaust note reveals the XF’s clearly luxury character. 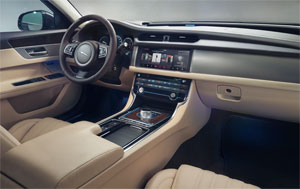 That theme is really played out inside where the cabin is top drawer in both look and feel. Material quality has climbed exponentially; and there is plenty of space and comfort to be found at all seating positions.

Base gauges have a familiar look to them, but a configurable 12-inch TFT virtual gauge panel is also available. A new InControl Touch Pro system takes over the duties for infotainment, and worked well enough in our limited exposure.

The trunk area is well-finished, and holds a very generous 19.1 cubic-ft. of goods.

There are certainly more F-type notions to the updated exterior, but clearly the XF is its own cat.

The front end does wear a more aggressive look, with larger intakes and a more vertical grille, but in profile the same basic coupe-inspired shape of the previous car remains.

From the rear, things have been tidied up with cleaner lines and sharper fit to all of the pieces; which include LED taillights that are the most overt homage to the F-Type. Standard wheels are 18s, with the S rolling on 20s.

All of the expected safety systems including Autonomous Emergency Braking are available.

So while this new XF has improved across the board and perhaps gotten a little more accessible, we think it’ll still appeal most to the buyer who’s looking for something other than a ubiquitous German sport sedan.

The lighter weight and more efficient powertrain has improved the XF’s Government Fuel Economy Ratings to 20-City, 30-Highway, and 24-Combined. For an average Energy Impact Score of 13.7-barrels of oil consumed and 6.2- tons of CO2 emitted yearly.

The 2016 Jaguar XF was certainly due for an update, as the previous gen had been around since 2009. But, this thorough redesign does much more than just carry on business as usual in the midsize luxury sport sedan segment. With huge gains in both posh and performance, much like the F-type, it’s primed to have a major impact on its segment. This cat is on the prowl.