There’s no doubt the 2011 Kia Optima midsize sedan was a head turning, milestone vehicle. It proclaimed that Kia was no longer an up-and-coming brand, but rather one that had fully arrived as a new force to be reckoned with.  Well it’s time for a new gen Optima, and for us to find out if that trend is still up.

The 2016 Kia Optima is the 4th generation of Kia’s bestselling model, and to say it has a lot on its shoulders is probably an understatement. As the Optima, along with the help of the Sorento and Soul, has been primarily responsible for elevating Kia to its place as the 8th largest automotive brand in the U.S.

The Optima’s mission to propel the brand ever forward will be powered by 3 available powertrains.

Base models get a 2.4-liter naturally aspirated I4, with 185-horsepower and 178 lb-ft. of torque accompanied by a 6-speed automatic transmission. 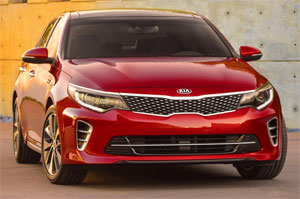 That makes the 2.0-liter I4 turbo, the hot rod of the group at 245-horsepower and 260 lb-ft. of torque. It’s an updated version, and that works with a 6-speed automatic.

The exterior design has been modernized, and smoothed, but not changed dramatically; as Kia wanted it to still be recognizable as the car that really put them on the map design-wise.

The tiger shark nose gets a flatter treatment compared to the Sorento and Sedona, while a chrome roof spear carries that flair rearward.

In size, it is 0.4-inches longer in both length and wheelbase, and 1-inch wider. More importantly, additional use of high strength steel means a much stiffer structure.

The overall result is maybe not quite as impressive as the Sorento, but perhaps our expectations have gotten too high.

Back seat room is very good, though seats are a little on the hard side and flat. 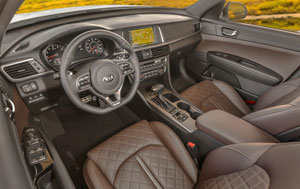 Safety systems take a step up, including autonomous braking, which worked flawlessly Volvo-like in our barrier test; and the available Harmon Kardon audio with 630-watts will turn your commute into a concert.

Trunk finish is a tad nicer than before, but could be improved upon even more. Stowage space sees a slight increase to 15.9 cubic-ft.

Driving impressions really come down to trim level. While all models benefit greatly from the stiffer structure, revamped suspension, selectable drive modes, and a smoother ride; only up-level SX and SXL trims get upgraded EPS with a rack-mounted steering box that has a much more dialed in feel.

Much like its Hyundai Sonata chassis-mate, things are very quiet inside. Wind noise has been virtually eliminated and engine noise only sneaks in when going heavy on the throttle, leaving just some minor road noise to tune out.

Of note, while virtually all Optimas are built here in the U.S., Kia does have the ability to import some should demand overwhelm their Georgia plant’s capacity.

The Government Fuel Economy Ratings are 22-City, 32-Highway, and 25-Combined.  We averaged a decent 24.2 miles-per-gallon of Regular. The Energy Impact Score is likewise middle of the road at 13.2-barrels of oil burned and 5.9-tons of CO2 emitted yearly.

Reasonable pricing has always been a Kia draw, and while base pricing of $22,840 means it not’s the bargain that it may have been in years past, it still delivers a heck of a lot of car for the money.

It’s hard to think that the 2016 Kia Optima could possibly have the impact that its predecessor did, but as the brand has rocketed up the automotive pyramid, things narrow and it gets harder and harder to impress. But the Optima still has enough steam to do just that.

Just 1-month and 2,500-miles into our time with this 2016 Kia Optima midsize sedan and it has already revealed itself to be a really nice, comfortable, high speed cruising machine.

Extended seat time is a breeze in this cozy car, with only a little more than expected wind noise at highway speeds to dampen our enthusiasm.

And speaking of noises, there’s an odd one coming from our car’s dash that’s clearly linked to the HVAC system. It comes and goes sporadically, so hopefully it will reveal itself when we make a trip to the dealer to get it checked out.

Auditory oddities aside, we’re currently averaging a great 28.9 miles-per-gallon from the 2.0-liter turbo-4, and have no complaints about the power that it delivers.

The interior of this SX Limited example is quite posh, and though some initially thought it a bit showy; it gets compliments from most who see it.

There’s no denying the Kia Optima has come a long way. We’ve had this 4th generation 2016 SX-Limited in our fleet for 3–months now, and we’re beginning to believe that this is Optima’s biggest leap yet.

With its spunky 2.0-liter turbo providing plenty of power, our mpg average is up to 29.2. Though more than one driver has noted some harsh downshifting on deceleration. That aside, the Optima is both smooth and capable in Euro-grand touring style.

As for our interior noise issue, the humming noise thought to be from the HVAC system, actually seems to be air escaping through the sunroof. Stay tuned for further updates.

We’re at 4-months and 8,000-miles with our long term 2016 Kia Optima, and nothing has dimmed our enthusiasm for midsize sedan yet.

Well, maybe nothing except the mysterious sunroof flutter noise. Our local dealer suggested the sunroof was out of alignment, but after an adjustment the noise is still there.

Performing mostly commuting duty this term, has seen mileage slip to a still good 28.8 miles-per-gallon. And all of that seat time has us appreciating the luxurious interior even more, with one staffer noting, “cannot see why you’d want to pay more for any other midsize car from any brand.” Throughout the summer and fall, the Optima has been both a great long-and- short distance cruiser. But now we’re all looking forward to seeing how it will survive our Mid-Atlantic winter. Stay tuned.

We’ve quickly travelled over 9,000-miles in our 2016 Kia Optima sedan. And during its first 5-months with us, a couple minor annoyances did not diminish our affinity for it.

But we are getting a little tired of them. The fluttering sunroof noise is still there, despite a trip to the dealer.

And the harsh transmission downshifting on deceleration seems to be getting worse.

On the plus side, mileage from the 245-horsepower 2.0-liter turbo-4 is back up to 29.0 miles-per-gallon, and we continue to hear nothing but praise about our SX Limited’s interior.

So balancing the good with the not so; we still have plenty of time to see which side will ultimately prevail.

No major revisions since our last report. Our SX Limited is very posh inside, so you really notice that the front seats could use a little more padding for long trips.

Otherwise, we’re still dealing with the same sunroof noise and harsh downshifting on deceleration that we’ve noted since the beginning of our test.

Our Optima’s Turbo-4 fuel economy is holding steady at 28.9 miles per gallon. We rate that very fine for a larger sedan.

As for our 2016 Kia Optima mid-size family sedan, well we really do love driving it, and looking around the interior any chance we get. But there continues to be little things that keep us from loving it as much as we could.

The latest is the locking up of the UVO infotainment system. It’s intermittent and thus hard to diagnose.

Still, it is popular for comfortable commutes and couple’s weekends. We’ve added 1,500–miles to our tally this segment; which stands at 16,000-miles after only 7-months.

Mileage from the 2.0-liter turbo-4 took a slight hit from so many short trips, but still stands at a good-for-its-size 28.4 miles-per-gallon.

Summer may be just getting under way, but our 2016 Kia Optima has been out enjoying the warmer weather quite a lot already. We added close to 2,000 miles this go-around, to bring our 10-month total to just under 18,000-miles.

Praises continue to mount up for its acceleration and handling, simple to master media interface, and the Optima’s overall ease of use. Not to mention interior refinement that’s closer to luxury cars than it is to your typical family sedan.

Its 2.0-liter turbo mileage is down slightly from last report to a still good 28.0 miles-per-gallon.

However, complaints about our car’s clunky downshifts from the 6-speed automatic on deceleration are piling up as well.

Our time with the Kia Optima may be winding down, but we’ve still got some summer drive-time miles to tack on before we wrap up our time with this Optima SX Limited.

After 11-months, the odometer in this handsome midsize sedan sits just past 26,000 miles.

Some of that from a recent Florida road trip where the Optima’s seats, both front and rear, provided great comfort; the trunk easily holding a week’s worth of family luggage and beach gear.

The A/C had no problem keeping up with the Florida heat; though we also went the windows down route, combined with the Optima’s huge sunroof to soak up as many rays as possible.

But here’s the best news of all, our mysterious sunroof fluttering noise seems to have gone away; bringing our list of gripes down to one, the transmission’s sometimes clunky downshifts.

Properly wrapping up a year’s worth of time with our 2016 Kia Optima sedan in only 1-minute is impossible.  But, we’ll attempt to sum it up by simple stating the Optima is a fantastic midsize four-door; one that delivers all the family practicality we’d hoped it would, along with the style and performance of a well-appointed sport sedan.  With our SX Limited’s odometer at 27,000-miles, we averaged a very good 28.4 miles-per-gallon from its turbo 2.0-liter and 6-speed auto powertrain. The exterior still looks fabulously modern, and the gorgeous interior not only provided great comfort, but held up very well. Issues have been minor…the fluttering noise from the sunroof that cured itself, and an occasional clunky transmission downshift on deceleration. Clearly we loved our year with the Optima, a sedan that in a world awash with crossovers, stands apart even more.