There’s no doubt that the Land Rover brand builds a variety of luxury SUVs in the purist of European executions. So it only seems fitting to have a purely European style motor clattering away under the bonnets. And now we can get two versions of that full emersion on this side of the pond as well.

With ultra-luxury SUVs now coming from the likes of Bentley, Maserati, and even sister-brand Jaguar, Land Rover’s Range Rover, and Range Rover Sport, have certainly got their work cut out for them, if this pioneering brand expects to remain a major player in the segment.

And while complete redesigns of both models are a few years down the road, as they already ride on new all-aluminum chassis’ that debuted in ’13 for the Range Rover, and in ’14 for the Range Rover Sport; bringing this Td6 diesel option to the U.S. is a good proactive step up. Even if it’s about 3 decades after everyone else got it.

A turbo diesel is much about torque of course, and there’s plenty of it when you nail the accelerator pedal. And that healthy punch is really your only indication there’s a diesel under the hood; as it’s easily one of the quietest, smoothest diesels we’ve ever driven. That includes the automatic start/stop system, which also works almost imperceptibly. 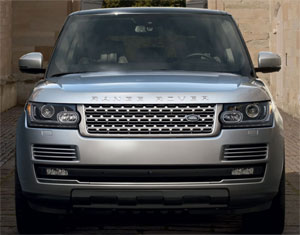 Even at idle with the hood up appreciating the view of this 3.0-liter V6 turbo-diesel, there’s very little indication it’s not gas fed. Horsepower is 254; with torque coming in at 443 lb-ft. Pretty stout for a diesel that traces its roots back to a late 90’s Ford-Peugeot-Citroen joint venture.

Brought totally up-to-date for us, including Urea injection, the other rational for entry here, now, is near-term fuel use mandates. Government Fuel Economy Ratings are 22-City, 29-Highway, and 25-Combined. We achieved 26.1 miles-per-gallon of Diesel in the Range Rover and 26.3 in the 3-row Sport. The best test MPG we’ve ever seen from the brand.

That makes for an Energy Impact Score of 15.3-barrels of oil burned yearly with 6.8-tons of CO2 emitted.

More importantly, for road tripping; range is close to a bladder-busting 600-miles. Towing capacity remains at a hefty 7,700-lbs., the same as the V8.

Also the same as the V8, the Td6 gets a wonderful 8-speed automatic transmission. Unfortunately it’s attached to finicky eShifters; rotary-style in the Range Rover, a handle in the Sport.

The rest of the experience, in both versions, is straightforward Range Rover; checking off all of the luxury, utility, and off-road boxes and then some. 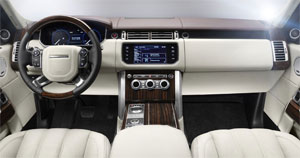 5-passenger interiors are very well appointed and all seats immensely comfortable; of course you can add a 3rd row in the Sport if you need seating for 2-more.

The touchscreen interface for navigation and the like, has been improved, but it remains more complicated than rivals.

One thing that’s not complicated, is engaging full-throttle for a ¼-mile at a time. That trip took 15.5-seconds in the Range Rover, with a speed of 88 miles-per-hour; after a 7.2-second leap to 60.

There’s mucho usable torque all across the dial. And it never seems to fizzle out, thanks to the rapid-fire shifts from the 8-speed. There’s not much clatter here either, more of a jet-like whoosh as you take off briskly.

The suspension feels very soft, so we expected a lot of body roll. But as soon as you turn the wheel, it magically firms up and scoots through with plenty of grip. It’s not a sports car, but a very predictable and easy-handling ute. 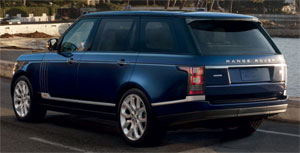 Average stopping distance from 60 was a great 114-feet. The pedal felt very soft and nose dive was slow and easy; but down the line, the calipers were certainly clamping down with authority.

Much like the Land Rover brand itself, you either get it, or you won’t. And any diesel will have limited American appeal. Still, now that diesel power has joined the 2016 Range Rover lineup here, we’ve joined a party that got started across the pond over a generation ago. So, if you’re looking to motor in true British style, you’re going to need to burn diesel, not petrol. It would certainly be our tea and crumpets.