There have been many steps along Lexus’ path from posh to performance. The watershed one of course, was the LFA. But more recently, the IS F and RC F have helped to pick up the pace. Now there’s a new GS F for us to sample, and we’ve got a race track with many tasty turns on which to do so. Let’s see if it’s a perfect pairing for our well-seasoned palettes.

Ahh… Lexus. That purveyor of fine luxury goods that masquerade as transportation. Like any automotive brand, they’ve had their hits and misses over the years, and we’re still not sold on their current trend of putting a European performance bent to every model. But perhaps this 2016 Lexus GS F will change our opinion.

The powertrain is the same 5.0-liter V8 and 8-speed automatic transmission that has been kicking around since the 2008 IS F launched the F performance branding. But horsepower is now up to 467, and torque to 389 lb-ft.

Around Roebling Road Raceway’s high-speed twists and turns that engine sounds fantastic, even though that sound is largely synthesized. And it runs even better, with very linear feel and power delivery that seems torquier than its sibling the RC F coupe, even with identical numbers. Still, it’s nothing close to CTS-V levels of brutality. 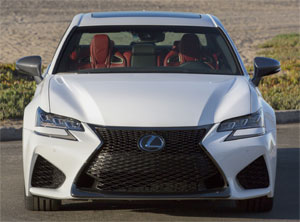 As for the chassis, well it’s completely competent and capable, yet not much more. Roll is subdued enough, but there’s just an overall soft feel that constantly reminds you you’re in a Lexus; as does the over 4,000-lbs of curb weight with 53% of it over the front wheels.

Still, it behaves mostly neutral with some mid-corner understeer to go along with throttle-on oversteer. The torque vectoring rear differential helps to tame that oversteer by transferring power to the rear wheel that will do the most good with it. You don’t really feel it working, but you clearly can tell the difference between Standard and Track modes.

The automatic transmission performs darn near like a sequential manual when in Sport S+ mode, with very quick gear changes when the steering wheel-mounted shifters are triggered.

Brakes were also solid, run after run; without any of the mushy feeling that usually arises in Lexus performance cars after a few hard laps.

Bottom line, we’ll call it a home run; but Lexus, drop some pounds and stiffen the suspension instead of relying on electronics to improve the handling and we might really have a grand slam.

But then, the GS F is not intended as a track car. To be one, the ultra-comfortable highway ride that Lexus owners expect would surely be history. 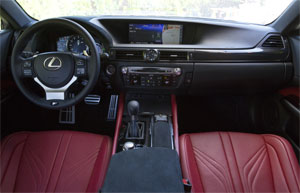 Speaking of comfort, there’s a unique interior to enjoy as you effortlessly eat up those miles, and an incredible 17-speaker Mark Levinson surround sound system to help pass the time.

F-exclusive gauges change themes according to Drive Mode, are easy to read at speed, and feature interactive displays like a G meter and lap timer.

You definitely don’t want to be messing with the remote touch controller at speed as it’s hard to be precise with even at normal pace, but the infotainment system that it controls is very comprehensive.

Room inside is plentiful, and seats are top notch front to back. The GS F even retains all of its 14.0 cubic-ft. of trunk space.

The quad tips of the stainless steel exhaust system, and available colors such as Molten Pearl, will surely shake things up in the Lexus showrooms. Lightweight 19-inch wheels with 255/35 tires up front and 275/35 rubber in the rear complete the package.

You’ll have to walk gingerly on the gas pedal if you want to keep those rears from spinning up off the line, but a 4.5-second 0-60 is the result, when you do it just right.

Throughout the 13.0-seconds that it takes to complete a ¼-mile at 111 miles-per-hour, the GS F feels fiercely fast, yet still smooth and comfortable like a true luxury liner.

Likewise, shifts are about as fast as they can be without sacrificing smoothness.

Government Fuel Economy Ratings are 16-City, 24-Highway, and 19-Combined. The Energy Impact Score is just a bit worse than average at 17.3-barrels of yearly oil use with CO2 emissions of 7.8-tons.

The GS F is not exactly a performance bargain either, with base pricing of $85,390.

So the 2016 Lexus GS F may not be as big of a step up as other previous Lexus performance cars, but it is no doubt an important one. It’s well-seasoned enough to spice things up, without letting the performance flavor overwhelm the rest of the Lexus luxury dish. We predict the brand’s fans, old and new, will lap it up.