After dominating the exotic supercar market with the P1, you might wonder what’s next for McLaren. Well, how about taking all that you learned from the P1 and scaling things down to more entry-level supercar territory. It’s the 570s, but this sure ain’t your normal entry-level anything!

The 2016 McLaren 570S is the first model to come from the brand’s “Sports” series, which falls below the “Super” series; cars like the 650S; and the “Ultimate” series which is comprised of the now out of production P1.

Never a brand to shy away from attention, McLaren offers plenty of bold colors for the 570S. Ours came in one of two orange tones available.

Being the everyman’s supercar means there are certain liberties taken with integrating creature comforts. It’s not so much about them being an afterthought, more of a fact that such things are low on the priority list, well behind hauling butt and taking names. 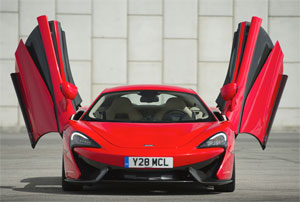 In our view, most of the alterations made to keep a lid on price will never be missed by the majority customers. They include forgoing the active aero elements for more traditional treatments, simplifying the suspension, and making the body panels out of aluminum instead of carbon-fiber. Still, it’s about 180-lbs. lighter than a P1.

Though the 570S does share the same basic carbon fiber tub, with a few updates; including a narrower sill to aid in entry.

Fortunately, access is still by way of the brand’s signature dihedral doors that swing up and forward providing both open access and a certain coolness factor that can’t be denied.

Likewise, the 3.8-liter twin-turbo V8 engine is the same, but puts out substantially less horsepower at 562, accompanied by 443 lb-ft. of torque. It’s mid-mounted and the 570S is rear-wheel-drive only.

Step on the gas though, and you won’t feel like it’s a detuned anything. Sprints to 60 happen in just 3.1-seconds and it’s a hold on and clench experience. 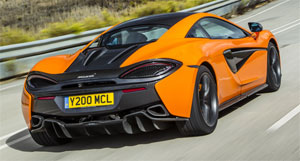 With the launch control sequence engaged, wait for boost to build and then take off. You do still feel some lag, but once the power starts pouring on, it blasts you back in your seat; not quite as brutal feeling as a GT-R, but the results are similar.

The turbo duet spinning behind your head sounds magnificent. Just let the 7-speed sequential gearbox take care of the shifting and enjoy the incredibly fast 10.9-second trip to the end of the ¼-mile at 137 miles-per-hour.

At our winter testing facility, Roebling Road Raceway near Savannah, the 570S proved supremely capable around this fast, nine turn track. Not quite up to the level of a P1, lacking that car’s active aero hardware, and the 570S was more sensitive to proper tire pressures, still it was pretty amazing nonetheless. 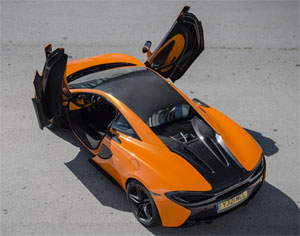 Swift and deadly through the high speed sweepers, yet it doesn’t mind the ultra-tight corners either, as it’s incredibly agile.

You would have to do something incredibly stupid to really upset this chassis, as in most driving modes the stability control is very sensitive. Know what you’re doing, however, and Track mode is there to fully accommodate.

But, before you dive into any high speed corners, you do have to slow down, at least a little. The standard carbon ceramic brakes were more than up to multiple laps, and performed fade free. Our full lap times were a little down from what we expected, but blame that on cold and windy track days, not the car.

Good news for those that have no plans on taking in track days, the 570S is also very pleasant on the street. We found transmission operation quite smooth for a sequential-trans exotic.

Inside you’ll find the extreme bolstering of the seats really locks you in place. Still, it proved a quite comfortable habitat for even the larger of our staff. 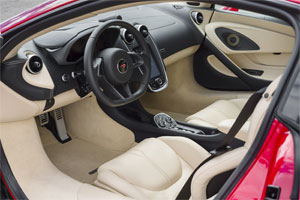 While for most, a $187,400 sticker, or even a monthly lease of about $2,200, will certainly not bring the word bargain to mind, yet it’s still the most attainable McLaren ever.

The just announced newest member of the “Sports” series, the 570GT, cost about 14 grand more, but you do get a glass roof and a rear trunk. Both versions deliver outstanding bang-for-the-buck among current supercars. And they are both hand assembled in Woking, England with the same attention to detail of the F1 cars that are being built just down the hall.

But back to just the 570S. We see it as proof that McLaren is now a full member of the conversation with when it comes to a broad exotic car lineup. And, compared to Ferrari and Lamborghini, it has the trump card of being way more exclusive. Although if McLaren keeps expanding their brand with cars like this, that’s not likely to be the case for very long.