Over the years, the Mercedes-Benzes C-Class has tried to balance a lot of missions. Aspirational, affordable, luxurious, and sporty. Clearly it’s difficult for any one car to succeed at all of those things equally. Intelligently, Mercedes now focuses different “C” models on specific missions. When we had to choose which C to test, it was really no contest. Say hello to the Mercedes-AMG C63.

We know that it’s getting harder to tell which AMG Benz’s are legit these days; but trust us, the 2016 Mercedes-AMG C63 and our test C63 S sedans are the real deal.

First indication? Fire it up and hear its 8-cylinders explode into action. Which instantly brings a smile to your face; something the turbo-charged ½-dozen cylinder powerplants of the competition can never do.

Not that it’s not turbocharged, this 4.0-liter has got 2-spinners nestled inside its aluminum V, helping in the S to produce 503-horsepower and 516 lb-ft. of torque.

From there it’s the expected AMG setup; 7-speed MCT transmission, and rear-wheel-drive.

The 4-link front suspension is recalibrated, as is the multi-link rear and all of the electronics that monitor them. The C63 S adds an electronically locking rear differential in place of the non-S’ mechanical one, that allows for faster lockup, and full integration into stability control.

Doing some racing of our own, around Savannah’s Roebling Road Raceway, it became clear that the C63 S is one hellacious track car.

The engine has power for days, with over 500 lb-ft. of torque, a very sensitive throttle, and no all-wheel-drive to help lay it down. So inputs are made carefully to keep the thrust coming, without angering the traction control gods, as it claws its way out of corners.

We did find electronic intervention a little inconsistent; sometimes taking over way too early, sometimes letting us get away with a lot more than it should. So, whether you use the sometimes working/sometimes not Race Start to get you going, launches aren’t as hard as you expect. But it shoots off the line efficiently to 4.1-seconds to 60.

Once you get rolling, power comes on like a Tsunami wave and hurtles you down the track. Shifts are firm and lightning quick; with the ¼-mile completed in 12.4-seconds at 115 miles-per-hour. 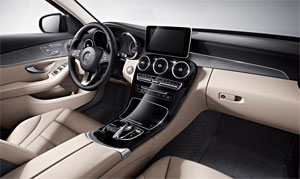 We found the brakes somewhat less impressive, as we experienced some fade; and feedback was not productive in any appreciable way.

Now that we’ve brought it to a halt, we can appreciate the exterior tweaks of the C63 S, which include a unique front fascia, fenders that have been widened to house the 19–inch wheels, a distinctive hood, and of course a spoiler and diffuser for managing airflow in the rear.

It’s hard not to steal glances around the cockpit while driving; with an impeccable red and black space that seems highly sophisticated yet racy at the same time. All materials are first rate; with genuine metal and wood trim, as well as some of the best looking carbon fiber we’ve seen.

So, despite all of the 2016 Mercedes-AMG C63’s refinement, it still feels more like a muscle car than just a spiced up C-class sport sedan. Which, when you go looking for that genuine AMG deal, will be music to your ears.