Mercedes-Benz has a long heritage of bringing us highly memorable cars. Like this 1956 300SL gullwing, and like the most recent gull wing, the SLS AMG. Now, we thought that car was also the ultimate collaboration between AMG and Mercedes. But, as it turns out, that it was just a teaser for the new Mercedes-AMG GT S, the first car to actually wear AMG as a brand. As you’re about to see it’s beautiful, unique, and yes, memorable to the extreme.

With the 2016 Mercedes-AMG GT S, not only is AMG now a brand, but it is the 2nd vehicle to emerge with an all-AMG designed chassis. A fact that takes AMG from being an in-house tuner, to a true world class luxury-ultra high performance car builder.

True, the GT S is certainly dimensionally less of a supercar than the SLS, and does away with the sexy gull-wing doors. But, it’s actually now more of an all-around high performer like the Porsche 911, only with a monster V8 under the hood.

Starting with the all-aluminum chassis of the SLS, AMG engineers shortened it by 2-inches for a 103.5–inch wheelbase.

From there, they added a new smooth-running 4.0-liter twin-turbo V8, with output of 503–horsepower and 479 lb-ft. of torque. The 7–speed DCT from the SLS also comes over, but gets upgraded with a wider ratio spread of gears. 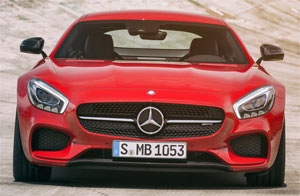 Between a lighter engine and shortened wheelbase, weight is distributed about the same as the SLS; 47% front, 53% rear. Steering remains hydraulic, with no electric assist, giving it great feel and weight.

As for the rest of the car, it’s European to the extreme with a super solid demeanor that makes you want to push it hard. Which is what race tracks are for, of course.

And putting in time at Summit Point Motorsports Park’s Shenandoah Circuit, we found the GT S’ chassis to be extremely responsive, as well as very forthcoming with its limits, helping you stay on top of things easily.

Despite less than optimal visibility, it’s a fairly easy car to drive fast. The suspension is stiff yet compliant, brakes were strong and fade free, and the car goes wherever you point it.

Power delivery is smooth and strong without any big hits or drop offs. We did find manual shifting a little sluggish, and had better results leaving it in auto’s Race mode.

On the street, the GT S has impeccable road manners, as miles are eaten up in true grand touring fashion.  And with all systems go in Comfort mode you won’t be in any hurry to get out of it.

Room in the cabin is adequate, seats are firm yet comfortable, and there’s even a healthy amount of storage space for gear. The aero-inspired interior is very similar to the SLS, with materials that are every bit as nice, despite a significant price disparity. 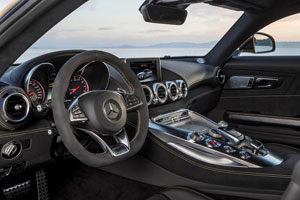 It’s not the most ergonomically pleasing space however, as you have to reach almost behind you to use the shifter, and there’s no comfortable way to rest your arm when using the touchpad COMAND controller. But, at least there’s a dedicated Park button unlike BMW M cars.

Traditional coupe doors surely help keep those prices in check, and aid getting in and out. While they also allow for a very modern panorama roof, behind the wheel you still find the classic feel of SL Coupes of yore.

While not all are enamored with the look of the GT S, a little too much 928/911 in the rear, we all agree it’s elegantly stunning and every bit what you expect from a premium product with a Mercedes heritage.

There’s definitely lots of hood stretching out in front of the driver, accompanied by a minimal cabin bump and Euro-style hatchback rear.

And, despite some familiar backend notes, there are plenty of elements such as the high fashion grille, hood and fender venting, and active rear wing to draw your eyes elsewhere.

In straight line work, the 3,600-pound GT S nails a 0-60 of just 3.5–seconds. Launch mode is easy and reliable, the turbos wind up instantly, tires hook up just as quickly, and off you go smoothly… but in a real hurry.

Here shifts are typical AMG DCT brutal, and you get snapped and pulled to the end of the ¼-mile in 11.5–seconds with the speedometer needle pointing at 126 miles-per-hour. 108-feet stops from 60 were the norm, though the clumsy-feeling long-travel pedal felt like it belongs more in an SUV than in a performance car.

But the GT S will even stop itself if you neglect to do so.

Government Fuel Economy Ratings are 16-City, 22-Highway, and 18–Combined. Not bad at all for a car with this much performance. Our heavy-footed drivers could only managed 15.3 miles-per-gallon of Premium.

GT S pricing begins at $130,825. Some 90 grand less than the SLS and a supercar bargain. An even lower priced GT arrives next spring with about 50-less horsepower and fewer go fast goodies.

2nd acts are often where plots thicken and things start to really get interesting. And that’s certainly the case here with the 2016 Mercedes-AMG GT S. AMG is branching out, making the performance story a lot more their own. And we’ll surely stay tuned for act 3…or should we say C63!