We’re big fans of MINI. And it has been almost as much fun watching the reborn brand grow as driving the results. And until this point, they have been able to maintain their quirky character, while getting bigger and more practical. Now it’s our turn to test that theory in the new Clubman, the biggest mini you can buy today.

With the latest MINI Cooper platform growing in size, and the Countryman crossover now in the lineup, we weren’t sure there was still a place in the MINI portfolio for the Clubman. Fortunately, MINI thinks there is indeed a niche, and this redesigned 2016 Clubman fits perfectly.

But, here is the kicker for us, it still feels exactly how you expect a MINI to feel. Which is an awful lot of fun and nimbleness crammed neatly into a tidy package.

Over the years, MINIs have certainly become more sophisticated, but there’s still that spunky edge that makes you want to dart in, out, and around anything in your path.

Some heft has crept in over the years as well; as weight, here in the Clubman form, is now over 3,100–lbs. It’s reasonably quiet inside; though most of the noises you hear, are ones that you actually enjoy hearing. 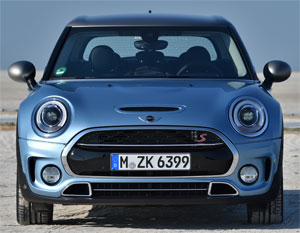 The Cooper, in all of its guises, is one of the few cars on the road that you really don’t want an automatic transmission in; luckily our tester did come with the standard 6-speed manual. The shifter works well, but could use a reverse lockout; and we’re still not used to looking for the electric parking brake. A 6-speed automatic is available in the Cooper, a new 8-speed with the Cooper S.

Going a long way toward keeping the Clubman relevant, is ALL4 all-wheel-drive available for the first time for 2017.

As with the rest of the MINI lineup, engines are BMW-derived and turbo-boosted.

For most the I3 will be more than fine, as you’ll enjoy wringing everything out of it; and as a bonus you’ll also get the better ride that comes with the base Cooper’s softer suspension and standard 16-inch wheels. These 17s are of course optional.

The biggest drawback with the Clubman is the visibility, as the view out of the back is incredibly restricted. 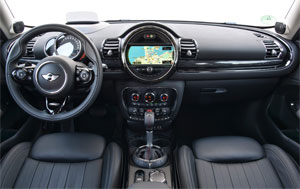 That’s despite Mini staying true to the Clubman’s wagon exterior theme, but now with four front-hinged side doors, and retaining the two barn-style doors at the rear. Vision issues come from lots of window pillars, and the side glass narrowing towards the rear.

Inside is a very modern MINI without staying too far from the cosmetics of the original. The gauges long ago moved from the center; now with a large central mood ring surrounding the multimedia screen, to retain the flavor. Though big, the circular glow can get annoying at night.

If you’ve never been in a MINI, there’s some initial confusion finding everything, but there are still big toggle switches for lots of controls; and it’s nice to use and feel mechanical things happening. There are even still some toggles overhead too.

MINI’s intelligent packaging means there’s also excellent use of all available space. After growing 10.9 inches in wheelbase for ‘16; there is now plenty of room in the back seats for adults. But unfortunately, the padding in those seats is so thin, you can actually feel structures beneath. Long rides are painful.

The signature split-cargo doors are certainly a bit arcane. But they pop open easily, and do allow you to access the cargo area without lifting up a big hatch. There’s now almost 48 cubic-ft. of space with the rear seats folded. Only the soon-to-arrive Countryman redesign will provide more in a Mini.

Government Fuel Economy Ratings are 25-City, 34-Highway, and 28-Combined; our average, a good 29.6 miles-per-gallon of Premium. There’s a respectable Energy Impact Score as well, of 11.8-barrels of annual oil use with 5.2 tons of CO2 emissions.

Base pricing, at $24,950, puts it above the Countryman; so apparently quirky doesn’t come cheap. Our advice, keep it simple and keep the price right around there. Start upgrading, and you can quickly be well above $30.000.

So, the character of the 2016 MINI Cooper Clubman has changed less than it has grown in size. It will never challenge the Countryman for all-weather, all-around utility, but Clubman stays truer to the fun-to-drive heritage of the brand. Indeed, there is nothing else like it on the road. Still fun, still quirky, still MINI.