By now, the reborn MINI Cooper has proven to be far more than just a one trick pony. Since it returned for 2001, it has encompassed everything from 2-seat roadsters to all-wheel drive crossovers. The topper throughout however, is the brand’s unique take on “driving fun”. And the purist form of that is when you lose that top all together.

While there are more great options than ever for affordable, small, sporty cars; and even quite a few reasonably-priced convertibles around these days. None are quite as all-inclusive of those attributes as this 2016 MINI Cooper Convertible.

A nice slice of its charm is of course the Cooper’s 1-touch power operated cloth top. Plus it folds in stages so you can slide back just the top portion as a sunroof.

As it fully folds, it comes to rest just behind the rear seat passenger’s headrests; so there remains a useful amount of luggage space.  5.7 cubic-ft. to be exact.

The boot opening is small, but MINI has a workaround for that, Easy Load levers that hold the convertible top up out of the way while you load your gear. 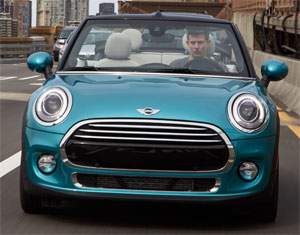 Under the bonnet, it’s the same engine choices as the hardtop, standard Coopers come with its well-regarded 134-horsepower 1.5-liter I3-turbo; while Cooper S’ get a version of BMW’s TwinPower 2.0-liter I4 turbo with 189-horsepower and 207 lb-ft. of torque.

Both with your choice of 6-speed transmissions, manual or automatic.

We’ve said it before, that the added power of the S is not essential to the experience, but we actually do prefer it here. It feels smoother than ever; and the additional boost helps offset the convertible’s weight gain. And it’s certainly helpful for enabling your daily dodge around the cell-phone wielding nitwits we all seem to be encountering these days.

This Cooper is still the same “square with flair” sports car we’ve always loved, but with the top down, the fun becomes ever more visceral. There is a little wind buffeting at speed, but it’s not an objectionable amount. But, remember, the ride remains on the stiff side.

That also means there’s not much flex or shake to be found, and no degrading in overall dynamics. It’s still some of the most fun on 4-wheels for the money.

Roll over hoops are now fully recessed behind the rear headrests, though those headrests are very large and block what little rear visibility there is with the top up. Though visibility is rarely a convertible strongpoint, extra caution is needed here when backing up; even with the optional back up camera. 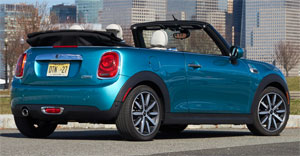 And one final complaint, the reach back to a seatbelt for those up front, is a long one.

Though this 3rd generation MINI is bigger by every measure, it still navigates cones like a gnat zooming around your head. Both the single joint front strut suspension and the rear multi-link are upgraded for the convertible’s heavier weight.

It really is an exceptional handler, immensely fun and capable; maintaining speed through high speed maneuvers without losing composure and only demonstrating a slight bit of understeer.

While not a rocket off the line, it does get off to a low earth orbit 0-60 time of 6.3-seconds. Power delivery is very smooth, with decent torque throughout the rev band.

The manual transmission would have been more fun of course; but with the automatic, shifting was quick and firm, as this Cooper S burbled and popped its way to a ¼-mile time of 14.8-seconds at 97 miles-per-hour.

Everything inside, remains the same as hardtop; so we still love the fact that the mood-ringed central display that used to house the speedometer is now dedicated to infotainment duties; with an iDrive derived controller for inputs.

Government Fuel Economy Ratings for a Cooper S automatic are 25-City, 33-Highway, and 28-Combined. We averaged a very good 32.0-miles-per-gallon on Premium.

Entry into the world of the MINI Cooper Convertible is priced at $26,800, about 5-grand over a base Cooper Hardtop. The Cooper S Convertible starts at $30,450. Getting it fully loaded is actually an option, adding every package available for a total of $35,200. Alas its false advertising though, as there are still plenty of other a la carte options that can take you all the way up to 40 G’s.

We really like it, but perhaps not at that high of a sticker. Since this 2016 MINI Cooper Convertible is old-school fun at its purest, our advice is to go as minimal as you can get away with, and save some money for going on some adventures. Because that’s exactly what you’ll feel like doing when you get behind the wheel, and drop the top of this captivating micro-machine.