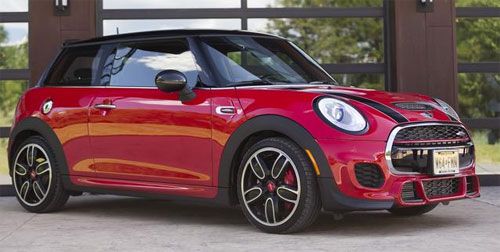 Hot hatches and bang-for-the-buck tend to go hand in hand. Much like Mini Coopers and John Cooper Works. A lot more bang added to an already fun hatchback for just a few more bucks. So with both fun and frugality in mind, we’ll “spend” our time wisely by hitting the track with this pint-size performer.

Hot hatchbacks like this 2016 Mini John Cooper Works Hardtop have been around long enough for us all to know the original formula well; take an innocuous looking economy car and inject a big dose of performance.

Well, not too many people would consider even a base Mini Cooper Hardtop innocuous; as with its over the top interior and racing stripe bedazzled exterior, it is one attention seeking bulldog of a car. But, the JCW treatment really ups that pedigree.

Starting inside, the JCW attempts to equally serve the masters of nostalgia and modern convenience. And it does so quite well.

There are only manual controls for the JCW Sport Seats; but with copious adjustments, most everyone will find their comfort zone. 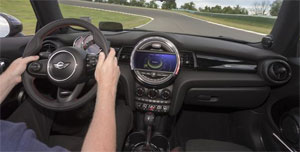 The central speedo is long gone, but the style is retained by an LED-ringed infotainment display, managed by an iDrive derived central controller. It works well enough, but even simple tasks require multiple steps.

The numerous toggle switches, which look pretentious in most cars, at perfectly at home here. As do the stainless steel pedals, and the steering wheel-mounted paddle shifters, if you opt for the 6-speed Steptronic automatic transmission over the standard 6-speed manual.

The back seat however, like most of the hot hatch breed, is largely useless for adults.

It still looks like a Mini outside, just a much tougher one. There’s a new front fascia with additional air intakes, as well as aero treatments down the sides and in back.

The racing stripes are a predictable and fun addition, as are the twin tips of the sport exhaust system; but they’ve gone a bit overboard with all the John Cooper Works logos applied to nearly every body panel.

Now, having dispensed with all of that, time to hit Roebling Road Raceway, and find out more about the equally important functional attributes. 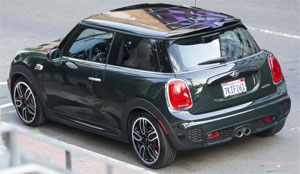 Well right away, it’s apparent that the JCW is a quite stable, proficient, and fun to drive micro machine. The suspension is lightened, stiffened, and generally retuned to make this go-kart feel go-kartier.

Most impressive of all, the upgraded Brembo brakes made for some epic live, local, and late braking adventures. Sport mode heightens the response and feel of the gas pedal, electric power steering, transmission shifting, and Dynamic Damper Control.

But ultimately, it is what it is; a hopped up front-driver with too much plow and not enough horses under the hood to do any major damage. It’s a perfect ride for someone who’s less worried about seeking lap times, and just wants to scoot around the track for…yes…the pure fun of it.

And here’s another fun fact; it’s the most powerful Mini yet, with 228-horsepower and 236 lb-ft. of torque coming from its turbo charged 4 cylinders. It’s the same 2.0-liter found in Cooper S models, but now with more boost!

It boosted us to 60 in 5.8-seconds. Now, some might find it unfortunate to have an automatic in this car, and for sure it takes some of the personal engagement out of the process; but, according to Mini, the auto is quicker to 60 by 2-tenths.

The shifts are plenty quick, with little drop off in between gears, keeping the boost up and power on; as we completed the ¼ in 14.2-seconds at 102 miles-per-hour.

Government Fuel Economy Ratings are better with the automatic as well; it’s 25-City, 31-Highway, and 28-Combined. On a mostly highway loop, we averaged 31.7 miles-per-gallon of Premium.  The Energy Impact Score is better than average with 11.8-barrels of oil devoured yearly with CO2 emissions of 5.3-tons.

With a $31,450 base sticker and plenty of options to add on, this JCW is not exactly a bargain blaster; but it does pack a decent enough amount of sports car-like prowess for those dollars.

So it looks like for ‘16, Mini has created a subcompact hot rod that Mini owners will truly love. It may not attract a lot of new converts to the brand, as there are a slew of other hot hatchbacks that do as well for less. Still, few rivals can peak the fun meter faster than the Mini John Cooper Works Hardtop.