Despite years of rumors about an imminent demise, Mitsubishi not only soldiers on, but appears to be well positioned to benefit from the insatiable American appetite for anything SUV. Not surprisingly, updates for their various crossovers are coming early and often. Indeed, after just 2 years on the market, the Outlander, their biggest ute, gets a thorough going over. So let’s see if it’s enough to keep sales pointed in the up direction.

Mitsubishi sales are still far from their early 2000’s highs, but they’re still up 25% so far this year. This 7-passenger 2016 Mitsubishi Outlander is a perfect example why. This may technically be a mid-cycle refresh, but just about every aspect of this crossover has been addressed.

So it’s easier to start with what hasn’t changed, and that’s the under hood department; where in this Outlander GT you’ll find the same 3.0-liter V6 good for a modest 224–horsepower and 215 lb-ft. of torque, attached to a 6-speed automatic with paddle shifters. 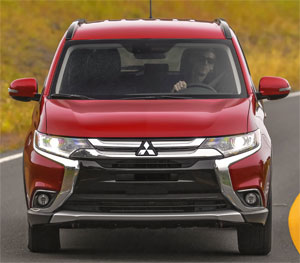 All other trims carryover a 166-horsepower 2.4-liter I4 CVT combo, that gets a software update for improved acceleration feel.

All bodywork forward of the A-pillars has been redesigned, including the sharp looking standard LED headlights and chunks of chrome that make up the firm’s new “dynamic shield” frontend. It’s a good attempt, but at the end of the day; it just looks like a different front end, that doesn’t completely jive with the rest of the car.

This is somewhat mitigated with new 18-inch alloy wheels that are standard on all trims. There are many big improvements you don’t see. Lots of sound deadening has been added; and the chassis is noticeably stiffer to provide both a better ride and, along with retuned shocks and electric steering, enhance handling response.

There’s no shortage of competition in the compact crossover segment, so Mitsubishi knows they must be either better or cheaper to stand out; or offer something the others don’t. So, in addition to the available V6 engine, there is also a standard 3rd row seat, though only kids need apply. 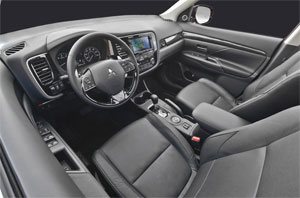 Access to that 3rd row is also tight, but new 2nd row seats fold easier than before; and with all rows folded, there is a good 63.3 cubic-ft. of cargo space.

The previous Outlander’s plastic jungle insides have been deforested for the most part; as dash and door panels are much improved, though the seats could use some further work, as you definitely sit on them more than in them. The optional touchscreen navigation and infotainment system are new and work quite well. A back-up camera is standard in all but the base ES.

Mitsubishi’s Super All Wheel Control all-wheel-drive system has always performed great in light off-road situations and we found that to still be the case.

Government Fuel Economy Ratings in the V6 GT S-AWC are 20-City, 27-Highway, and 23-Combined. We fell a bit short on our loop, with an average of 20.4 miles-per-gallon of Premium. That makes for an average Energy Impact Score of 14.3-barrels of yearly oil use and CO2 emissions of 6.4 tons. 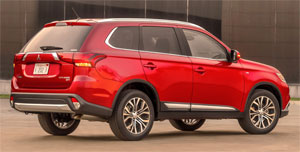 In its base form, $23,845 makes the Outlander a real bargain for a 3-row crossover. As you work your way up the trim levels however, that dissipates slightly by the time you arrive at our GT’s base price of $31,845; our tester with options was over $35,000.

The 2016 Mitsubishi Outlander is a good crossover choice at a good price. It’s not our pick of the compact litter, but despite the design’s overall age, it’s still quite competitive thanks to frequent updates and its standard 7-seater status. Like the smaller Outlander Sport, another good reason things are trending up at Mitsubishi; as they climb their way back to once again being relevant in the American marketplace.