Porsche always seems to have a few tricks up their sleeve. The latest is this Cayman GT4. Now at first glance it appears to simply be a Cayman with the 911 Carrera S’s 3.8-liter 6 crammed into its mid-ship engine bay. But there’s a lot more going on here than that. So let’s hit the track and find out just how much!

The 2016 Porsche Cayman GT4 does indeed get its power from the ’16 911 Carrera S; but then it also gets almost an entirely new body wrapped around it, as it is 1.3-inches longer than a Cayman GTS, and even adds almost half an inch of wheelbase.

More downforce is generated by the reengineered front fascia with new front splitter, as well as from the prominent fixed rear wing in back. Side intakes use blades for directing additional air into the engine.

And while it may be the same 3.8-liter Boxer-6 found in the Carrera S, it has seen a few tweaks, as it’s a mid-engine placement for a rear-drive engine. Because of that, and perhaps to avoid damaging big-brother’s ego, the official output is slightly less at 385-horsepower and 309 lb-ft. of torque. 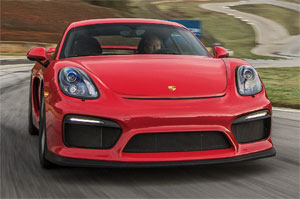 And in a departure from the path Porsche has trod lately, the GT4 is fitted only with a manual transmission, though it’s a beefed up 6-speed, not the 911’s 7-speed.

Launching with it, is about as simple as it gets, rev to 3-grand, slip the clutch a tiny bit and you’re off and running; and there’s a lot of grip for a rear-wheel-drive car with this much steam.

After hitting the high speed corners of Roebling Road Raceway, comments from our drivers ran the gamut from the usual “amazings” to “I would drive this car until the wheels fell off, and I bet it would take a while”.

Needless to say, we’re enamored. So what has us going all fan-boy? Well, it starts with the immense grip, the tractable engine that always seems to have plenty of power no matter where you are on the track, the way it rotates so beautifully in corners; and really just the sheer competency this car displays without ever feeling like its working hard, or making you do so. 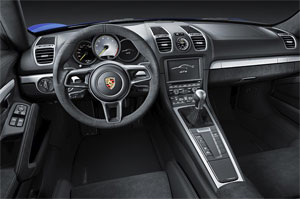 It’s an incredibly engaging car as well; the manual transmission works with such precision it requires no thought, and the active rev matching works perfectly. Brakes have enough power to eject you through the windshield if you weren’t belted in securely and hugged so warmly by the spectacular Sport Seats Plus.

Both those brakes and suspension are slightly modified versions of the components found on the 911 GT3; and PASM naturally gets recalibrated to rightfully deal out the correct amount of help only when needed.

The interior gets the light weight treatment, but not at the cost of sacrificing comfort. The most noticeable element being the pull strap door handles that work fine, and become an instant conversation piece for every passenger.

Government Fuel Economy Ratings are 18-City, 23-Highway, and 20-Combined. For a just barely worse than average Energy Impact Score with annual use of 16.5-barrels of oil with 7.4-tons of CO2 emissions.

If you’re one of those diehards, you’re missing the point of the 20-16 Porsche Cayman GT4, and perhaps of sports cars in general. A pure sports car not about looking the coolest, costing the most, having the most gadgets, or even having the best pedigree. It’s about balance, performance, and getting the most you can out of the least you can get away with. The GT4 fully embodies this ethos. Without a doubt, this would be our 2-door Porsche of choice!