After taking the youth market by storm shortly after Y2K, things have been pretty quiet of late in the Scion camp. And that goes for sales too. But that may be changing as a pair of new models hit the streets. One is exactly what you’d expect from Scion, and one is something entirely new for the brand. So, let’s take a look at the iM and the iA.

You can easily argue that the 2016 Scion iA is a very distinctive product for Toyota’s youthful marque, and a good start at expanding the brand’s reach to other age groups. After all it is their first four-door sedan as Scion is mostly known for 5-door hatchbacks such as this equally new 2016 Scion iM.

Though both of these front-wheel-drivers are launching together, their engineering has little in common, as they both rely on different chassis’ and looks.

The 5-door iM’s 1.8-liter I4 engine comes from the Corolla. Here it makes 137–horsepower and 126 lb-ft. of torque. Transmission options are a 6-speed manual with Hill Start Assist or a sportish CVT with 7 virtual gears.

Like the chassis, the iA’s engine is from Mazda; a 1.5-liter I4 with 106–horsepower and 103 lb-ft. of torque. Transmission choices here are 6-speed manual or a true 6-speed automatic.

But the iA certainly looks like a Toyota product at the front, with the wide mouth hexagonal grille that they must think portrays civilized aggression. But, from the side, there’s clear Mazda2 flavor, with lines sweeping up and down over a 101.2–inch wheelbase on 16–inch wheels. 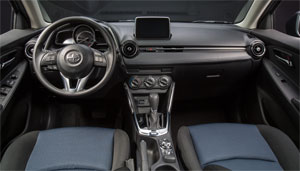 Inside is where you’ll see the Mazda influence most of all, and it’s hard to argue with the clean, simple design, or the standard dash top Touch Screen with central controller. Quality is quite good for the price point, but we could use a few splashes of color to break up the darkness.

Cabin space is adequate for a subcompact, and there’s plenty of room in the trunk for gear. 60/40 split folding seatbacks are standard, though they don’t exactly fold flat. Push button start, back-up camera, and Pre-Collision system are also standard.

As for driving, despite having the smaller engine of the pair, the iA zoom-zooms around quite nicely. The manual transmission has a lovely, tight shift pattern, and we had lots of fun scooting through curves around Santa Monica, California.

Now, the 5-door iM’s look is clearly more in the line with Scion’s current styling, though there’s also a strong resemblance to the Lexus CT 200h.

Lines here are sharper, standard wheels are 17s, and there are a wealth of added on aero elements and of course LED running lights, all portraying a young, sportier demeanor. 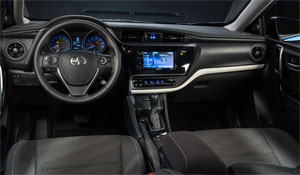 The interior is a bit more sophisticated and more premium in feel. Sporty look front seats deliver good comfort and fairly substantial bolstering; while all controls fall readily to hand.

Pioneer 6-speaker audio is controlled with a 7-inch center stack touchscreen with a standard back-up camera. Other standard niceties include a color info display in the gauge cluster, and dual zone climate.

There’s plenty of small item storage, while cargo space behind the rear seats is a respectable 20.8 cubic-ft. Though not exactly pegged, the excitement meter climbs a little higher here as well, living up to the iM’s sportier promise.

Much like the tC it’s based on, there’s a very solid driving feel and the iM can handle quite a bit of pushing before it starts to protest. 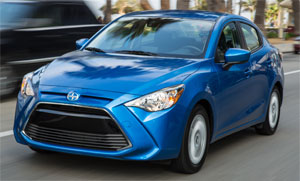 The iA’s Energy Impact Score is an excellent one, 8.9-barrels of annual oil use with yearly CO2 emissions of 4.0-tons.

As is typical for Scion, both cars come in a single trim level with plenty of color and a-la-carte TRD options for personalization. Pricing for the iA sedan starts at $16,495; while the iM hatchback begins at $19,255.

We’ve been waiting for some time for some new product from Scion. However, we’re not quite sure the 2016 iA and iM were the rides we were hoping for. Although Scion is trying to branch out and expand its appeal beyond the 20-somthing market, we’d still like to see the kind of creativity that originally anchored the brand.

Still, the iA and iM do have capital letters following lowercase letters in their names, are overall very acceptable, and extremely well equipped for their price. And, that, no matter what their badge, is all good.