In case you missed it, with all of the hoopla over the recent unveiling of the more moderately priced Tesla Model 3, Tesla’s long awaited all-electric luxury crossover has finally arrived, and with real some surprises beyond its doors. So take it from us, the Tesla Model X is not your typical SUV.

Of course Tesla doesn’t build typical anything, so this 2016 Model X may just change crossovers, as we know them, forever.

As you might expect, it’s heavily based on the Model S sedan with the same basic interior layout up front, including the incredibly large touchscreen command center in the dash.

Seats that are adequately comfortable for commuting use, are not quite up to the long haul task, though you can’t drive more than 250-miles without taking a break anyway, which is the official government rating for this P90D.

MPGe Ratings are 89-City, 90-Highway, and 89-Combined. For an almost perfect Energy Impact Score of just 2-tenths of a barrels of oil used yearly with no CO2 emissions. 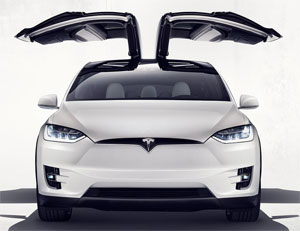 Dimensionally, the Model X is about two inches longer than the Model S, with the wheelbase stretched just 2-tenths of an inch.

The design is very fluid, with the sharply descending roofline meeting the tall rear in hatchback manner, more so than a traditional SUV shape. It’s not the most handsome design going down the road, but it is highly and functionally aerodynamic; and certainly unique, which Tesla buyer still appreciate.

Of course the Model X’s biggest trick is its Falcon double hinged wing doors that swing up vertically to allow wide access for entry, and to be able to access the rear in tight spaces with as little as 1-foot clearance.

They’re packed full of sensors designed to keep them from hitting anything; and they sure did seem to operate on the safe side, not opening or closing if anything is anywhere near them.

6 or 7-passenger versions are available, and 2nd row seats have both good comfort and space. They are pedestal mounted, moving up and out of the way for 3rd row access. The system works well, but it’s also very noisy in operation. 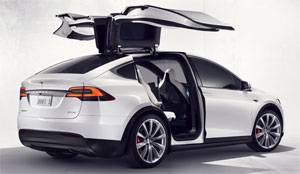 There’s not quite adult size in 3rd row, and 2nd row seats do not fold for maximum cargo carrying. Still, there’s as much as 77 cubic-ft. of cargo space inside; as well as a front trunk. As for doing other SUV type things, the Model X features an impressive 5,000-lbs. towing capacity.

Pretty impressive for a vehicle that weighs around 5,500-lbs. due to all of the necessary batteries.

All that weight is carried low of course, so body roll is minimal and cornering inputs quick; nice direct steering helps as well, but it’s lacking in feel.

All Model Xs are all-wheel-drive; accomplished with motors both up front and in the rear; delivering immense amounts of torque instantly.

There’s an enormous panoramic windshield that’s a bit disconcerting at first, but certainly aid in the great visibility all around. Still there are cameras mounted just about everywhere to help you out in tight maneuvering. 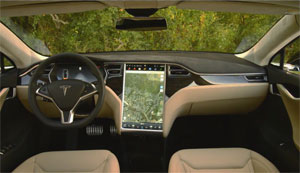 Those cameras aid in driving tasks as well; as on the highway, you can pretty much just sit back and relax, letting Autopilot do most of the driving for you. It seems to struggle a little on 2-lane roads; so best to take charge once you reach your exit.

You can even live out your Knight Rider fantasies by summoning the car to come get you.

There are certainly some quirks that go along with the Model X, and more than a few squeaks and rattles as well; all things that the early adopting faithful seem to have no problems overlooking.

If you like the Tesla Model S and want more room and functionality, the 2016 Model X is everything you dreamed about, and it’s in a class all its own. Yet even more so than the sedan, it behaves less like an EV and more like a solid every day family hauler. One that, instead of wasting time standing next to a gas pump, you just plug-in…before you drift off to dreamland.