While almost every major car brand offers some form of hybrid vehicle, it’s Toyota that is truly the hybrid champ, with over 8 million hybrids on the road worldwide. And the vast majority of them are the hybrid that started it all, the Prius. Well, believe it or not, now it’s time for a 4th generation of the popular gas-electric. Let’s see if it’s still a green-machine benchmark.

Not only is this 2016 Toyota Prius all-new, but it’s built on Toyota’s New Global Architecture that will carry a wide variety of new models in years to come; not just hybrids.

And while that might be mostly about cutting costs and simplifying production, it’s a much stiffer platform that is supposed to deliver a more rewarding driving experience; not a past Prius strong suit. Is this the fun to drive Prius we’ve been waiting for?

Well, a first-time double wishbone independent rear suspension is certainly an upgrade over the former torsion beam. It provides both a smoother reaction to bumps, and better grip in corners.

Now, we’re not saying it can now moonlight as a track day ride, but there is clearly a better, more in control feel behind the wheel. Furthermore things have gotten quieter and visibility has improved all around. 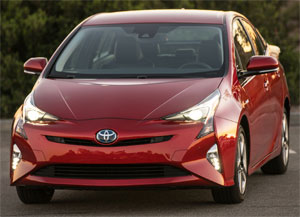 Prius is longer than before, by over 2-inches; and appears less bulbous, if also less familiar. In fact, a taller front grille area, most probably for pedestrian crash protection, and a flatter, more defined hood, alters the traditional Prius triangular profile significantly. The stance is wider, lower, and with lots of front fascia character lines, far more aggressive.

Lighting is a big contributor to that theme too, from the standard, menacing slim LED headlights, to the form following signature tails.

New looks and improved driving capabilities are great, but Government Fuel Economy Ratings are far more important to the Prius buyer. While not yet finalized, Toyota estimates 54-City, 50-Highway, and 52-Combined. Or overall, 2 more than last year.

There will also be an Eco model with lighter weight and enhanced aerodynamics that will push the numbers even higher, to 58-City, 53-Highway, and 56-Combined.

As for the hybrid gasoline-electric powertrain behind those gains, it has gotten lighter and more compact.

The gas-fed internal combustion part remains a 1.8-liter I4; but it’s been redesigned top to bottom. And while fuel efficiency is up, power is down. Total output now comes at 121-horsepower.

Transmission remains a CVT, with a combined transaxle/electric motor that is also smaller and more efficient. If only we could figure that trick out for ourselves. 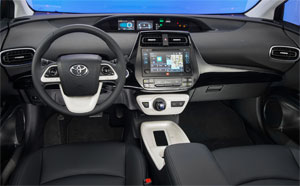 The powertrain space saving translates to more space inside. It was already a pleasant, if not super comfortable environment, but now it’s been upgraded to be a bit more mainstream and perhaps more inviting, but there is still plenty of that “Prius feel” remaining to keep it unique.

The instrument panel now has a hint of a wraparound theme to it, and controls are more in-line with the rest of the Toyota car family. Yet, the wide, and very comprehensive full-color TFT gauge cluster remains in a centrally located dash top bubble.

Steering wheel controls are even more comprehensive, and of course there’s a big center touchscreen for navigation and the like.

Front seat comfort and support have never been Prius strong points. 20-16 makes another stab at correcting that. The cockpit feels wide and airy, and there is excellent small item storage. The rear seat is also more comfy even as the space retains its coziness.

Cargo space is up slightly as well, to 24.6 cubic-ft. with a spare tire, 27.4 without; thanks to the smaller battery pack which is now Lithium-ion in most models, and now located completely under the rear seat.

It seems like everything you buy these days, whether it’s a toaster or toilet boast increased safety, and for ’16 the Prius gets Toyota’s Safety Sense, with Lane Departure Alert, Radar Cruise, Pedestrian Detection, and other active features to keep you from hitting anything or anyone; making the new Prius a borderline autonomous machine.

Pricing starts off at exactly the same place as the outgoing model at $25,035. A top end Four Touring starts just over 30 Gs.

We’ve been down this road three times before with Toyota. As like many of their recent products, their hope is that the 2016 Prius will transition from being a rational purchase to an emotional one. We’re not sure it’s quite there, yet.  But bottom line, the Prius will continue to do what it has done for years, expand the hybrid profile to more and more households, and be the gasoline/electric benchmark for others to follow.