While the Toyota brand is certainly synonous with hybrids, it has taken almost 20 years for that fuel stingy technology to trickle down to their highly popular RAV4 compact crossover. Finally, for 2016, it has arrived, and it joins a revamped lineup that includes updates throughout the RAV4 roster. So let’s see all this fuss is worth getting charged up about.

So, while the 2016 Toyota RAV4 Hybrid is not a vehicle we get overly excited about driving; its presence will none the less have quite an impact in the compact crossover segment where impressive MPG ratings are in short supply.

There’s not much outside to discern the new hybridness, which is a good call we think. Over 300,000 buyers last year alone obviously agree. So, the hybrid gets you just a few additional badges and the traditional blue Toyota hybrid logo treatment.

But all RAV’s get an updated exterior for ’16 including a new front fascia with simulated skid plates, available LED headlights and tail lights, a smoother rear bumper, and sharper rocker panels. 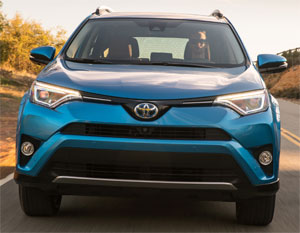 Hardware is the now very familiar 2.5-liter I4-based Hybrid Synergy Drive setup, with 2-electric motors up front for a total system output of 194-horsepower. A CVT transmission is mandatory.

And much like the larger Highlander, a 3rd rear-mounted electric motor supplies the all-wheel-drive.

Government Fuel Economy Ratings are 34-City, 31-Highway, and 33-Combined. We averaged 32.1 miles-per-gallon of Regular. That’s 6 mpgs better than we recently averaged in a non-hybrid RAV4.

So the Energy Impact Score is much improved; now burning just 10.0-barrels of oil yearly, with C02 emissions of 4.5-tons.

That makes it both the most powerful and most fuel efficient RAV4 you can get, so no need settle for one or the other.

Toyota makes no claims of it being quieter, but we found that’s the case. And the added weight of the hybrid system seems to have helped with a more substantial overall feel.

Yet, through the cones it was plenty light on its feet, but ample amounts of understeer and eco-minded tires kept it from reaching its true potential. 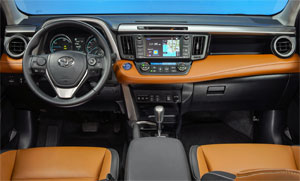 The added electric assist was very noticeable off the line, as we sprinted to a quick 7.4-second 0-60 time. A solid second faster than the non-hybrid. There was much less CVT buzziness than expected, and we completed the ¼-mile in 15.8-seconds at 85 miles-per-hour.

Braking impressed as well. 124-foot average stopping distance from 60 was accompanied by excellent stability, and a nicely firm pedal.

Inside, there’s an updated gauge cluster with the usual hybrid monitoring displays. And all RAVs have minor equipment upgrades this year.

Front seats remain very comfortable. Rear seats less so, but there is still a good amount of room for a small CUV.

Hybrid hardware packaging results in a slight decrease in cargo capacity, but the 35.6 cubic-ft. behind the seats is still among best in class. It grows to 70.6 with the seats folded. 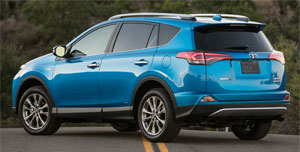 Now if the hybrid thing is not your scene, Toyota has also unleashed a new SE trim; swinging the RAV4 pendulum over to the enthusiast’s side of things. There’s a flashier exterior including 18-inch alloy wheels, LED headlights, and hot new colors. Also included, are a sport-tuned suspension, unique interior trim, and paddle shifters for the 6-speed automatic transmission.

The Toyota RAV4 was the pioneer in adapting a car-like unitize chassis to a small utility. So, we remain puzzled why it took so long to pioneer this RAV4 Hybrid. But, the results sure speak for themselves; close to 200-horsepower and over 30 miles-per-gallon. And while that is probably plenty enough to keep the RAV4 a leading player in the compact crossover segment, Toyota’s improvements across the board make that a certainty.