The compact/mid-size pickup truck segment used to be huge one, with just about every domestic and Asian brand after a piece of it. But cheap gas and low prices for full-size trucks caused most makers to either abandon the segment, or soldier on with badly aged designs. Well things are changing. Gm is back with an all-new Colorado and Canyon, and now the number one truck in the segment, the Toyota Tacoma, is defending its turf.

The 2016 Toyota Tacoma is only the 3rd generation of the Tacoma, with the last gen soldiering on for 10-years. But, other small Toyota pickups like the Stout and Hi-Lux have been on American streets since the 1960’s.

One area where Toyota’s small pickups have traditionally been superior to rivals is in off road capabilities, and that continues to be the case for 20-16. All 4-wheel-drive Tacomas come with a limited slip differential that we found quite capable. TRD Off Road models up the ante with a full locking rear and A-TRAC traction control.

As with most modern 4X4s, there’s less to manually control as more electronics handle the situations. Here there are 5-modes to choose from plus Crawl Control. With settings for Mud and Sand, Loose Rock, Mogul, Rock and Dirt, and just Rock, it should be able to get you out of just about any jam better than MacGyver. 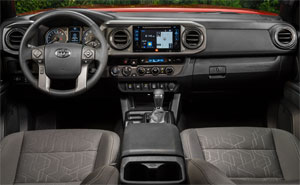 The most logical comparison for the Tacoma is the reborn mid-sizers from GM, and while this interior is highly functional, it’s not as nice as those Detroiters. Materials have softened to the touch and look very nice at first glance, but the more time you spend in contact with them, the less impressive they become.

The seating position has definitely been raised, now feeling more truck-like and less like a Camry. And since nothing really happens these days unless you capture it on camera, all Tacomas come with a GoPro mount ready to help you catch your off- and on-road exploits.

6-speed automatics are available for both engines; and paired with the V6, it felt much more sorted than on the GMs. Manual transmissions are also still available; a 5-speed in the I4 and a 6-speed with the V6. 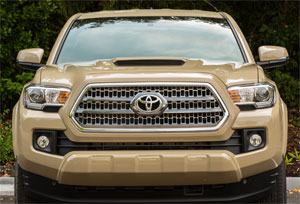 Though NVH has been improved upon throughout the new Tacoma, one area that it clearly falls short compared to the Colorado and Canyon is in interior sound deadening. There’s still lots of noise in the cabin, especially at highway speeds.

Through the roads around Tacoma, Washington of all places, we found the ride to be about what you’d expect in a midsize truck that’s built more for work than pleasure. Solid, but not unforgiving, with a little more float than the GMs. Harsh jolts came only from large bumps.

As for cab configuration, there is Access Cab and a full 4-door Double Cab; along with 2 bed lengths, 5 and 6-feet. And as before the interior of the bed is made up of fiber reinforced composite.

To our eyes the exterior design is still very familiar. It’s a mixture of old Tacoma from the side, and new Tundra from the front and rear. Along with more squared off fenders followed by domestic trucks, it is indeed tougher looking.

The two most obvious Tundra trickle-downs are the hexagonal grille and stamped branding on the tailgate. Everything from 16-inch steel to 18-inch polished alloys wheels are available; and believe it or not, there are still drums doing the braking at the rears.

Keeping base pricing low was a priority, and the still American made Tacomas start at just $24,200; but as before, if you’re not careful with options, you can approach full-size pricing in a hurry.

So yes, a lot of people have been anxiously waiting for the 2016 Toyota Tacoma to arrive; and surely an awful lot of those people will be quickly buying one. But while we may prefer the Colorado or the Canyon for our everyday duties, Toyota clearly knows their customers and has done what it takes to keep them happy and the competition at bay. For now, the Tacoma’s spot at the top looks secure.

We haven’t even put a thousand on our new 2016 Toyota Tacoma 4X4 yet, but already this midsize brute has come in handy; helping staffers get chores done around their house, and even packing things up for moving to another one.

Things inside have certainly gone up-market in the latest Tacoma, especially in this Limited example we’re pampering ourselves with.

But true comfort is still in short supply, and one of our staffers wished for more seat adjustment.

The jury’s still out on this new 3.5-liter V6 as well, with some finding torque delivery not as immediate as expected. But our 21.5 miles-per-gallon average is a worthy tradeoff.

These last few weeks have been busy ones for our long-term 2016 Toyota Tacoma; hitting just about every point on the compass and racking up 5,000-miles since our last report.

And with all of those miles behind us, we’ve come to the realization that despite its all-new design, it’s not really all that different from what it has always been; a rough-and-ready, highly capable 4X4 pickup.

There’s a lot to like about it; it handles well, it’s enjoyable to drive, and despite slipping a little this report, we feel 20.5 miles-per-gallon is quite good.

As for the negative side of the coin, we still find interior comfort just satisfactory; and radio reception, whether AM, FM, or Satellite is poor.

It appears our early engine impressions were warranted, as peak torque delivery in this new 3.5-liter V6 does indeed come 600 RPM later than before. And while at 265 lb-ft. it’s only 1 lb-ft. less than the previous 4.0-liter, it sure feels like it’s even lower.

Of course the eco-minded 6-speed automatic transmission plays a part in that as well; as at highway speeds, heading up even minor hills requires a downshift of two to maintain pace.

It is a fairly high climb up into the cabin, but the space itself is packed full of just about every amenity a family could want; so we can easily see the Tacoma converting a few SUV people into truck people.

The control layout is good, as is the tech interface; and we all appreciate having volume and tune knobs for the radio, just be careful you don’t trigger the touchscreen as you’re cranking the volume.

We wonder how many will make use of the standard GoPro camera mount. Still, the Tacoma has always been designed more for the youthful buyer, or at least those that want to portray that image.

A pickup truck is always handy to have around; so we’ll sure miss having this 2016 Toyota Tacoma 4X4 to rely on.

While only with us 4-months, we packed in a years’ worth of moving, hauling, and vacations, and the Taco held up fine.

And while a longer bed would have been nice, the flexible rear seating area makes up for a lot of the difference.

One more reason midsize trucks are having a resurgence, and this Toyota Tacoma is at the front of the pack.