It’s been quite a while since we’ve had a really all-new Volvo to sample. And, for a while we were having doubts whether Volvo would ever get around to addressing their large but aging XC90 crossover. Well, not only have they gotten around to it, but they’ve turned it into a potential luxury-class hall of famer.

13-years have passed since Volvo made its mark in the burgeoning three-row luxury crossover segment with the first XC90. But, over all that time, newer rivals have seriously dampened the “nine-0’s” sales. So the all-new, 2016 XC90 has certainly got its work cut out for it.

That first 2002 XC90 proved to be the right vehicle at the right time. And, at least visually, this stylish second-gen 7-seater looks like it scores again.

It’s wagon-ish two-box shape is familiar enough to be easily pegged as a Volvo, but like your Aunt that took a mysteriously long vacation to South America and came back looking younger than ever, it’s clear there’s been a lot of work done here. 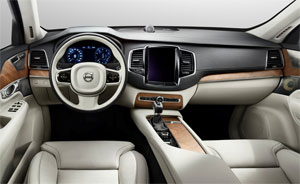 But we all know it’s what’s inside that counts; and impressively, the XC90’s interior has transformed from utility grade to flagship material. The layout is smooth, simple, and not muddled at all. Very few traditional buttons or knobs remain; but the few that do, are the right ones.

A tablet-like Sensus touch display dominates the center stack. It’s arranged more vertically than horizontally, like a Tesla S, and its use is very intuitive.

As in every Volvo we can remember, the front seats are a highlight; offering great levels of comfort and support. That’s also true for the sliding and reclining second row, and even the still adult capable third row. Plus, features like the built-in child booster seat are still far and above class typical.

And, even with Volvo’s latest change of ownership, the brand’s commitment to safety hasn’t wavered. The XC90 is packed with enough safety features to keep even worry warts at ease. 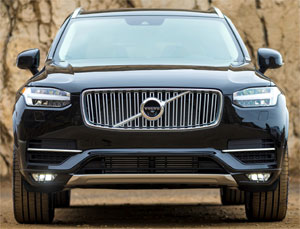 As for its actual utility factor, the XC90 can carry plenty of goods.13.0 cubic feet worth behind the third row seats, 41.8 behind the second, and 85.7 behind the first. And, for ease of loading there’s a hands-free power liftgate.

All XC90s are equipped with advanced all-wheel-drive, 8-speed automatic transmission, but somewhat surprisingly, only 4-cylinder power. But, the 2.0-liter I4 in our T6 is both turbocharged and supercharged for 316-horsepower and 295 lb-ft. of torque.

And, you forget it’s a 4-cylinder after just a few minutes behind the wheel, as it provides effortless power. Even the automatic stop/start is seamless, and it can still tow 5,000 lbs.

Regardless, we still think an inline 4 may be a tough sell in this segment. Though the forthcoming plug-in hybrid T8, with the boosted 2.0 plus an electric motor for 400 total horsepower, will certainly be a Volvo differentiator.

The more time spent driving, it becomes clear that this vehicle is built for family vacations over long distances. It’s extremely quiet and solid. Rough roads and slick pavement do nothing to upset it. 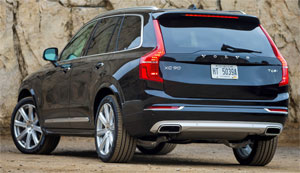 There’s a very natural feel to the electric power steering, and through the cones we were mostly impressed with the XC90’s sporty firmness. The rear suspension features a Corvette-style transverse leaf spring to eliminate cargo-robbing coils and shocks. A full air suspension is also available.

Plus, T6 Government Fuel Economy Ratings are still 20-City, 25-Highway, and 22-Combined. We averaged a very good, for its nearly full-size demeanor, 26.0 miles-per-gallon of Premium. The Energy Impact Score is an average one at 15.0-barrels of annual oil consumption with CO2 emission of 6.6-tons.

Choices in this segment are indeed plentiful, but base pricing of just $49,825 means the XC90 T6 is highly competitive.

Lavish interiors, sporty attitudes, and sophisticated powertrains are just the price of entry into the high end crossover segment. So, how does the 2016 Volvo XC90 expect to get back on people’s short list? Well, by providing all of that and more, in the way that only Volvo can, with top notch safety, otherworldly comfort, and family extra-friendly features; all wrapped up in unmistakably Swedish style. We are very impressed!