When Acura gave the 3rd generation MDX crossover a new look halfway through its lifecycle, it would have been easy to think that was it. But not for Honda’s luxury brand. For this engineering minded company the Sport Hybrid Version of the 2017 MDX is the real headline. Of course the only way to see how well “sport” and “hybrid” work together is to go for a drive.

The 2017 Acura MDX Sport Hybrid is the brand’s first gasoline-electric utility vehicle. In keeping with Acura’s hybrid tradition, the internal combustion engine is matched with three electric motors, like we’ve seen in the RLX Sport Hybrid sedan, and the NSX supercar.

On that score, the MDX closely mirrors the RLX’s all-electric Super-Handling All-Wheel Drive setup with one electric motor up front, and two in the rear.

The rear motors provide both go and sharper turns through torque vectoring, sending cornering power, when needed, to an outside rear wheel, while simultaneously braking an inside rear wheel. 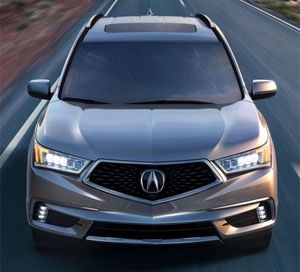 And, just as in the Sport Hybrid RLX, it all works quite seamlessly, as power is constantly being distributed to different wheels in different amounts at all times.

Conventional power is from the well regarded corporate 3.0-liter V6, here rated at 257-horsepower, or 33-less than the 3.5 liter V6 on the standard MDX. But, since this is a hybrid with a trio of electric motors, the total output is boosted to 321-horsepower and 289 lb-ft. of torque.

Up front is a 47kW electric motor, built into the 7-speed DCT transmission. Each rear wheel is driven by a 36kW motor. That draws power from a 72-cell, 1.3-kWh lithium-ion battery pack under the driver’s seat.

The hybrid hardware’s 200 plus pounds of extra weight lowers the Sport Hybrid’s center of gravity by an inch compared to the standard MDX, but actual rough road ground clearance remains the same.

On the twisting roads east of Seattle, Washington, we found that between the near instant power vectoring, and rapid response of the active dampers, the MDX Sport Hybrid easily mastered uphill switchbacks at speed.

The Sport Hybrid adds a 4th drive mode, Sport Plus, making this MDX even more of a driver’s SUV. It disables EV only driving, and adds more battery assist on takeoff.

There are steering wheel mounted paddle shifters, but we didn’t find the DCT needing an extra pair of hands.  The SH-AWD torque vectoring is neither seen nor heard.  Of course, you can actually see it working on the upper display screen, and certainly can feel it with the Sport Hybrid’s confident road manners in the wet and dry. 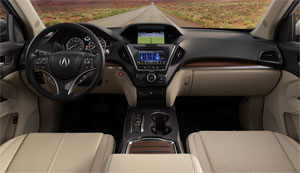 Like all MDXs, the Sport Hybid comes with three row seating, but in only two trims.

The Technology Package makes room for seven; Advance has 6 seats with captain’s chairs in the second row.

The front cabin environment maintains the level of understated luxury that we’ve come to expect from Acura. Stainless steel sport pedals are one of the subtle signs that you’re in the Sport Hybrid. All MDXs now include AcuraWatch safety and driver-assistance.

The Sport Hybrid’s technology leaves plenty of practical room inside. Cargo space behind the rear seat remains the same as the standard MDX at 15 cu-ft.  That increases to 38.4 cu-ft behind the second row, and 68.4 cu-ft with all the rear seats out of the way.

Outside, the hybrid only reveals itself through a small badge on front fenders…and a blue “S-H” on the Super Handling All-Wheel Drive badge at the rear. The side sills and front and rear skid garnishes are the same color as the body. Other than that, it’s a carbon copy of its gasoline-only twin… including the new and far more attractive diamond pentagon grille. 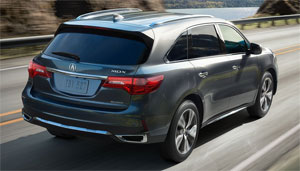 One thing you won’t see here is a trailer hitched to the back. Acura says towing for the MDX Sport Hybrid is “not recommended”.

Government Fuel Economy Ratings are 26-City, 27-Highway, and 27-Combined. That beats the standard all-wheel drive MDX by 23% Combined and 37% in the city.

The Energy Impact Score is slightly better than average, burning 12.2-barrels of oil yearly with 5.4 -tons of CO2 emissions.

We already consider the 2017 Acura MDX one of the best three row crossovers at any price point. With the addition of the Sport Hybrid, and its electrified Super Handling All-Wheel Drive technology, the reach of this luxury laden, family crossover has no equal.