The original Acura NSX made quite an impression on many people when it brought a uniquely Japanese perspective to the supercar wars. Well after many years of hoping and much delay from Honda, there is finally a new one to drive. Does it carry on that same perspective, or is it a whole different animal?

In order to properly introduce this 2017 Acura NSX, a bit of a history lesson is prudent. When this New Sportscar eXspiramental arrived 25-years ago, it was more than just a Japanese Ferrari knockoff. It was a high-tech, modern take on the European supercar theme. Featuring a transverse mid-mounted VTEC V6 in an aluminum-bodied chassis, with Honda-level refinement and daily driver comfort, at pricing that no exotic could touch.

Fast forward to 2016, and after much delay, caused by calling an audible halfway through development to change the still mid-mounted engine from transverse to longitudinal placement; it has finally hit the streets.

And it sure looks awesome on them, not in any extreme or flamboyant way. But with a highly functional design that manages airflow for cooling electric and internal combustion parts, with vents and scoops strategically placed all around. 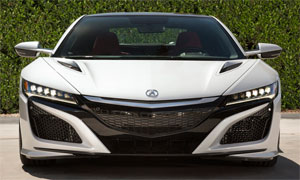 It surely has some big expectations to live up to. But going in, Acura engineers knew it would be a tall task to properly represent the NSX’s history while pushing it into the future. One thing they held onto was a cozy and low riding cockpit, with great seats, and all-around outward visibility that puts most cars of all stripes to shame.

As for the go-fast hardware, Acura took a currently popular supercar route; a hybrid all-wheel-drive system that uses the now twin-turbocharged V6 to power the rear wheels and 2-electric motors forward for powering the fronts. Plus, an additional e-motor mated to the engine. It’s similar to the RLX Sport Hybrid, but in reverse.

The V6 now displaces 3.5-liters, and uses that electric assistance mostly at launch to bridge the gap of turbo-lag until its twin boosters spin up to full force. The results? A total of 573-horsepower and 476 lb-ft. of torque.

Its 9-speed DCT transmission is Honda’s own design. We found it, along with its paddle shifters, to work well in all situations. Smoother than a Honda Pilot on the street, only occasionally hanging on to a gear longer than you’d like; swift and precise on the track, very much like an Italian exotic. 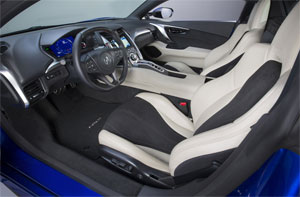 Suspension is supercar-spec aluminum double wishbone in front, with a multilink in the rear; magnetic coilovers all around. Drive modes do much to adapt both the driving experience and powertrain performance to suit your style; with ride quality that instantly swings from Accord compliant to track car stiff.

Getting to that on-track performance; there were plenty of early negative reviews of the NSX, and compounding the issue are the 3-different sets of tires available. Standard Continentals for the street, Pirellis and Michelins optional for track work. We drove with the Pirellis on the track and Contis on street.

For us, this NSX went about track work with the quiet proficiency you expect in a Honda product, there is absolutely nothing offensive or vicious about it. Power is coming from 3-different angles and being applied in various amounts simultaneously, yet it all works with mostly seamless precision. It doesn’t so much hammer around corners as think its way through them.

Even in straight line acceleration, it takes off directly and with a smoothness that seems to mask the magic that’s happening, as it propels you to 60 in under 3.0–seconds. Again, up there with supercars with much higher price tags.

Launch control engages easily and perfectly every time, consistently delivering simply incredible, rocket-like power. And, optional carbon-ceramic brake rotors will bring you back down to earth safer than any drogue chute.

So it almost goes without saying; but as before, the now U.S. built NSX delivers supercar style performance for a fraction of the cost of its closest competition. Though it may not be quite as attainable as before, with base pricing of $157,800 only about 800 will be available here this year. Upgrading it to track spec. will push it closer to $200,000, where a lot of high performance cars reside.

But on the global roadmap of supercars, the 2017 Acura NSX surely lies at the intersection of performance and technology. So we’ll go against those early reviews and say that it stays 100% true to its heritage, and easily worth the wait.  An incredibly refined, highly capable, tech-heavy, reliable daily driver that will appeal to equally sophisticated, performance minded drivers looking for a rarified showcase. If you liked the NSX before, you’ll love it now!