While it has only been a year since Fiat-Chrysler showed the Alfa Romeo Giulia sport sedan at the L.A. auto show, rumors of its imminent arrival have been around for years. Well, the wait is finally over. The 505-horsepower Quadrifoglio is here first, followed by more insurable models in early 20-17. But the big question remains, can any Italian four-door standup against the teutonic wall.

Depending on how long you’ve been paying attention to the automotive scene will probably be an indication on how much you know and how you feel about Alfa Romeo. They may not have the modern name recognition of now sister-brand Ferrari, but Alfa has over a century of racing history of their own. And they are leaning on both that history, as well as help from Ferrari, to bring Italian flair into the traditional European sport sedan segment, with the 2017 Alfa Romeo Giulia.

Ferrari help comes in the power department with a derivative 2.9-liter bi-turbo V6 powering the top Quadrifoglio model with its as mentioned 505-horsepower joined by 443 lb-ft. of torque. From startup to full song it has an acapella racing note that resonates better than any German sport sedan could. 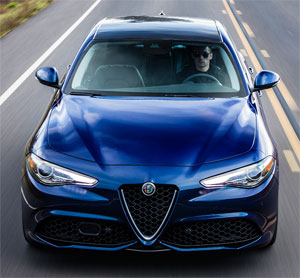 There’s an 8-speed automatic transmission, and its aluminum paddle shifters are mounted to the column, again Ferrari style. Factory specs say the combo delivers you from 0-60 in 3.8 seconds.

Expectedly, the rear-drive only Quadrifoglio is where things are certainly the most interesting.

But, volume, and everyday competitiveness will come from the Guilia Base and Ti models with a 280-horsepower 2.0-liter turbo-4 engine. Rear drive too at first with all-wheel drive arriving later.

All Guilias ride on an all-new chassis with double wishbone front suspension; and in back there’s a unique Alfa-link with vertical rod design. Active Chassis Domain Control is standard in Quadriofoglio, optional on the Ti.

And while there’s no carbon fiber in the chassis like the 4C, there’s plenty both inside and out of the Quadrifoglio; including the adaptive front spoiler, the roof, hood, and even the drive shaft.

Though technically a midsize car, its 111.0-inch wheelbase is the same as an Audi A4.

Everything from the trademark shield grille, to the short overhangs and muscular stance, to the quad exhaust tips scream Italian performance.

Inside, leather seating is standard; and while room is not overly plentiful, it is certainly better than average for a Euro sport sedan. Both the Quadrifoglio’s 8.8-inch display screen and the rotary-controller interface look and work great. 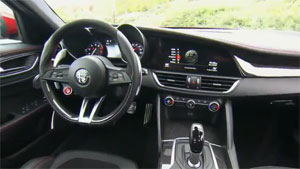 We can appreciate how simple the interior design theme is, with what seems to be just the right amount of buttons. Though some items such as the vents and displays look a little too FCA parts bin. Gauges are clear, with analog tach and speedometer.

But, we’re sure you’re really wanting to know how the Giulia is on track. Fortunately, we’ve been there and done that; and can report that the Quadrifolgio feels incredibly well-balanced.

The optional carbon ceramic brakes are incredibly legit too; but unless you plan on abusing them to the fullest, they might not be worth the costly upgrade.

The Giulia shares the 4C’s DNA drive modes with the Quadrifoglio adding Race mode, needed to quell the traction nannies. The 8-speed works great, as good if not better than many DCTs; and when in Race mode it will only shift when called upon to do so. 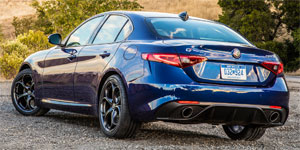 The steering is very quick and plenty precise; with feel that resembles an Italian exotic more than a Euro sport sedan.

Safety systems are fully up to spec too, including autonomous braking.

We also spent drive time in the mid-level Giulia Ti, and while it doesn’t match the Quadrifoglio for all-out performance, there’s plenty to like here as well, including balance and fast steering, with an overall prowess that’s on par with other 2.0-liter luxury sport sedans, yet this one clearly speaks Italian.

Undoubtedly, the 2017 Alfa Romeo Giulia is sure to appeal most to those in the “anything but a BMW crowd”. But with the Quadrifoglio, Alfa boldly breaks into the sport sedan segment, with both a raucous attitude and a demonic demeanor that will ensure that it doesn’t go unnoticed.