The Audi R8, since its inception for 2008, has been considered by most  automotive reviewers, including us, as the most drivable of all supercars.  Or at least it used to be, until everyone else started making their supercars daily driver friendly as well. So, what’s the next trick for the second-gen R8? That’s what we’re about to find out.

The 2017 Audi R8 has more than a few tricks up its sleeve, but by far our favorite, is the awesome mid-mounted V10 engine, that for starters looks fantastic under the glass rear hatch.

Way beyond looks is the 610-horsepower this 5.2-liter naturally-aspirated V10 plus delivers, along with 413 lb-ft. of torque. So of course it’s the most powerful production Audi to this point; 60-more horsepower than previous, but it feels like even more.  A de-tuned 540-horsepower version is also available.

The 7-speed S tronic transmission works just as fine as ever; it’s easily one of the best around, with fast, sharp, yet smooth shifts regardless of drive mode or driving style.

The shifter is also improved, just don’t forget to push the Park button when you do. 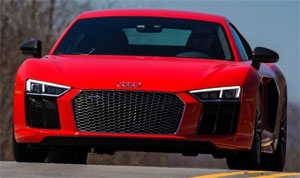 Still rear-biased quattro all-wheel-drive of course, but full power can actually be sent to the front as well, should there ever be an occasion when the computer feels it’s wise to do so.

The look is so familiar, you might not even recognize it as all-new, which is not entirely a bad thing; as its purposeful design has aged amazingly well.

It appears most evolutionary up front with a taller nose. The side is perhaps a little slicker with more pronounced side scoops. And it still looks tough as nails from the rear.

Behind the wheel, it maintains the ability to feel like a garden variety sport sedan when tooling around.

There’s perhaps a little more Italian influence to the interior now, with lots of controls on the steering wheel and a TFT panel, similar to the Huracan’s, behind it.

We love the look, and all of the data that it provides right in front of your face. 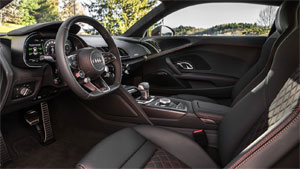 The rest of the cabin, with its minimal controls, reminds us more of the TT; reaching a new level of driver-centric, as with everything in front of driver, not much is left for the passenger to do other than hold on for dear life.

Of much more importance is on-track performance, and here it still feels like one of the easiest cars you’ve ever driven fast, it’s just that there’s a serious nasty streak lurking not too far above the track surface.

It stays billiard table flat through corners, and mostly neutral. There’s instantaneous power for pulling out of them, with only throttle-on oversteer to deal with, none of the Huracan’s understeer seems to be present.

The V10-plus is everything it promises, and the exhaust sounds amazing no matter what mode you’re in.

Around Summit Point Motorsports Park’s Shenandoah Circuit, we found the gearing was spot on, and manual shifts came crazy fast. But with the paddles on the wheel itself, they are easy to lose track of when shuffling the wheel.

No such problem when you keep the wheel straight, the throttle pinned, and trans in auto. No turbos to wait for, no e-motors, just immediate launching with no wheel spin, no lag; hitting 60 on this day in 3.0-seconds flat. The ¼-mile thrill ride ends 11.0-seconds later at 128 miles-per-hour.

Perhaps the best news of all with this 2017 Audi R8, is that nothing changes to the original R8 formula; exotic level performance, wrapped in couture sheet-metal, with a daily-driver nature. It may not be at the top of anyone’s ultimate performance car wish list, but no sane person will ever be disappointed with this piece of German engineering at its finest.