There’s no doubt that Audi has built some beastly beauties over the years. And truth be told, we can’t get enough of them. So, of course we got a little giddy when Audi delivered a long, dark, and handsome RS 7 for us to try out. What’s gotten our automotive hearts all aflutter? Well, let’s find out.

Audi has long had their own unique take on the German sport sedan theme; basing it on front rather than rear-wheel drive chassis; and while seeing it mature, we have grown to really enjoy their approach. While they have plenty of models to choose from, it’s this 5-door supercar RS 7 that we’ve taken a particular shine to.

When unleashed for 2014, it was the most powerful Audi you could get; eclipsing even the R8. Of course since then, a new R8 has upped the ante; so this 2016 RS 7 gets a host of updates to stay in the game, and placate those enthusiasts that always expect more performance.

The RS 7 is, of course, a high output version of the A7; and along with the middle-child S7, all get new front fascias for ’16 with full LED headlights.

In kind, the rear is updated with new taillights above, and trapezoidal exhaust tips below. Functional eye candy includes front and rear splitters and a deploying rear spoiler.

Inside, adding to one of the nicest interiors in the biz are color, trim, and tech updates. Valcona leather seats, carbon fiber trim, and a 3-spoke steering wheel with paddle shifters are all part of the package. 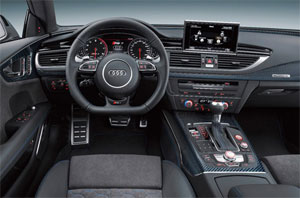 To which you can add an almost $5,000 Bang and Olufsen Advanced Sound System as well as an Alcantara headliner.

Old school gauges are still the norm, not the full TFT virtual panel of newer Audi’s, and we’re fine with that. An optional Driver Assistance Package gets you active lane keep and Audi’s adaptive cruise control with full stop and go.

But, it is the new Performance package that is the most important news to us and other RS7 fans. It really notches ups the prowess of this already super sedan.

Starting with the engine, the RS 7’s 4.0-liter turbocharged V8 gets a big boost in output, up 45-horsepower to 605. Torque, with full over boost engaged, climbs 37 to 553 lb-ft. The only transmission remains an 8-speed Tiptronic.

To make sure you’re fully ready for what this car has to offer, you have to dial up dynamic mode in Audi Drive Select to get the full power out of it.

So engaged, at our test track, we were off and running. There was a brutal amount of traction off the line dealt by standard Quattro; and from there on out it was full “beast mode”, with savage amounts of acceleration pouring on seemingly nonstop.

There’s plenty of shifting going on, but that happens lightning quick with no lapse in power. If you need more of a rush than this, you’ll have to find something with fewer doors and a much higher price tag.

There was all kinds of grip for getting through the cones as well, with neutral handling and a well-planted rear. And even when pushing at what we thought were extreme levels, the RS 7 seemed to be begging us for more.

There’s not much on-center feel through the steering wheel, but it is ultra-quick and nimble.

And if all that wasn’t enough, 105-feet was all it took to bring this 4,500-lb. land shark to a halt from 60 miles per hour, with great supercar-like feel through the pedal.

So, not only does the RS 7 in Performance trim deliver a supercar experience in a luxury sedan package, it does so at a price significantly less than your typical exotic; starting at $129,925. That’s only about 20-grand added to a RS 7 Prestige; so in the rarified world of extreme performance, that’s a bargain.

At the end of the day, you could look at the 2016 Audi RS 7 with Performance pack as yet another automotive plaything for the rich guy who already has everything. But we prefer to look at it as a mild-mannered super sedan; capable of performing superhero-like feats when called upon by a performance-hungry citizen of "Motoropolis".