We’re not sure which is harder to take; the fact that Bentley is actually selling an SUV, or the fact that it will have tremendous impact on the brand. That has clearly been the case with other luxury makes, where what first appears to be a niche, quickly turns into their best-selling model. So, let’s check out Bentley’s new star, the Bentayga.

The 2017 Bentley Bentayga is certainly one of the most exclusive SUVs money can buy for now; and arrived with perfect timing, with the economy pointing up and luxury consumers once again over- consuming.

But, Bentley did have some help in this momentous effort. The Bentayga’s basic architecture is parent Volkswagen’s MLB platform, which also carries Porsche’s Panamera and Audi’s Q7. However, the Bentayga is more massive than both, at almost 17-feet long.

With that, traditional Bentley lines abound, and seem to translate much better in person, than with any of the prototypes seen on auto show floors. 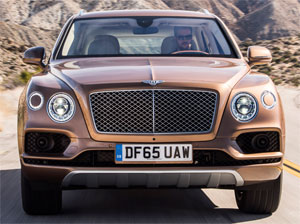 Both the structure and body panels are mostly aluminum, with steel used only where necessary for crash protection.

On road, that translates to a big SUV that feels thankfully like a much smaller one, as the Bentayga does an amazing job of keeping its composure no matter the speeds or curve radius. All the serenity of prior Bentleys remains fully intact, with perhaps only some minor wind noise a reminder that you’re now in a much squarer box.

A 48-volt electrical system was needed for the Bentley Dynamic Ride electronically controlled, continuously damped, self-leveling air suspension with active anti-roll bars. Set the drive mode to “Bentley” to experience how Bentley engineers would have set up the ride back in the days when only speedy posh was required.  Simply dial in Comfort or Sport for its full range of capabilities. Or, come up with your own custom setting. As with all Bentleys, the options are limitless.

Standard is an all-new 6.0-liter twin-turbo W12 that not only has the increased output of 600-horsepower and 664 lb-ft. of torque, but it weighs significantly less than the previous 6.0-liter. And after spending some wide open throttle time behind the wheel, it’s even smoother and quieter than before.

All-wheel-drive is another standard, as is the expected ZF 8-speed automatic; towing capacity is 7,700-lbs. 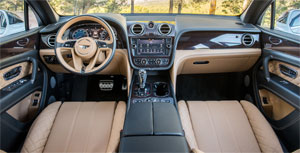 It pulls like an EV off the line, with a gentlemanly showing of great power and abundant traction; making for the smoothest 12-second trip we’ve ever taken down the strip.

Whether you’re dodging commoners or simply darting through cones as we were, you’ll find steering is a little slow, and this truck’s weight really becomes evident here; but the suspension tightens up nicely, and there’s a solid amount of grip.

Inside, as you might expect, Bentayga’s gorgeous cabin defines extreme comfort, luxury, style, and craftsmanship, notably the extremely precise and exquisite wood work that abounds.

There are of course many other traditional trinkets to impress, like organ stops for the circular vents, and posh, quilted seats that you comfortably sit on top of, not sink down in. 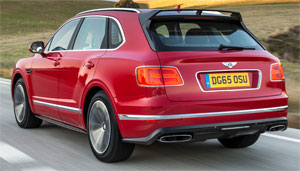 Rear seat room is very comfy and spacious as well, along with a reasonable 17.1 cubic feet of custom luggage space behind it.

Government Fuel Economy Ratings are 12-City, 19-Highway, and 15-Combined. Our average came in better than expected at 18.1 miles-per-gallon of Premium. Put there’s still a very poor Energy Impact Score of 22.0-barrels of yearly oil use with C02 emissions of 9.9-tons.

Bentley initially resisted the SUV urge. Now that they’re all in, the 2017 Bentley Bentayga may just be the most prestigious rolling status symbol in recent memory. And due to early orders, Bentley has already upgraded their projected sales figures. Best news of all, it’s very well done, and has ushered in a whole new era for Bentley and for luxury SUVs.