Life has never been harder for the BMW 5 series. After defining what it means to be a middle weight luxury sport sedan for 45 years, they’ve seen upstarts equal and even beat them at their own game. But for its diehard fans, only a 5-series will do. And for them, BMW unleashes the best “5” yet!

Few cars have the ability to stir emotions like the BMW 5 Series. Indeed, driving this latest 7th generation, all-new for 2017, was a life altering experience for some of our staffers.

What could possibly bring out such sentiment for a four-door sedan?

Well for starters, there are lots of technology goodies; from one of the best Head-Up displays we’ve seen, to a dynamic instrument cluster, gesture control, Bowers & Wilkins surround sound, and a smart key that allows you to control the car no matter where you are, and even has the car pull out of a tight parking space for you.

But the slickest feature by far, is the 3D surround view camera system that lets you see around your car like having your own personal camera drone. You can even access the cameras from your smartphone when you’re away from the car. 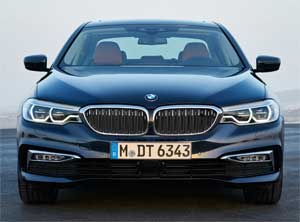 But much more importantly than all of that, BMW has been on a mission of late, to bring the BMW back to being a true BMW; by giving us some honest-to-goodness steering feel, even though it may not be the most efficient thing to do. That’s the kind of “connectivity” we still desire in a sport sedan.

For hitting the track, the 540i xDrive was our weapon of choice. And after nailing the gas, it was Auf Wiedersehen as we go down the track; thanks to strong torque and loads of xDrive grip, hitting 60 in just 4.7-seconds.

All 5 Series’ come with BMW’s Steptronic 8-speed automatic transmission; which delivered quick, firm shifts whether triggered manually or left in auto. The 540 cleared the ¼ in 13.2-seconds at 109 miles-per-hour.

There was great balance on our handling course, with the ability to dial up equal amounts of over or understeer depending on how aggressive you are with throttle and steering inputs. It made for a blazingly fast, tire howlin’ trip through the cones. 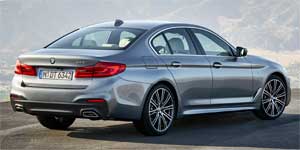 Good heft to the wheel, with some real feedback; made things much better too.

Of course times being what they are, there are enough active safety features here for borderline autonomous driving; and when forced to take control, it does so with mild aggression.

Despite dropping a few lbs. from last gen, the new 5 is a little over an inch longer than before; as well as marginally taller and wider.

Things are beautiful inside, and perhaps not as sterile as before, though the layout remains delightfully familiar. Definitely a more inviting space than before, and at the risk of sounding blasphemous, almost Acura-like in its blending of luxury and tech.

We’re now in our 6th iteration of iDrive, and it continues to improve with every update; with even…oh my gosh…a touchscreen interface.

Front seats are very comfortable, and the split-folding rear seating area has ample room for three adults, or you can make it a cozier space by adding a center console and other luxury hardware.

So, while things may be tougher than ever in the mid-size luxury sport sedan segment, the 2017 BMW 5 Series is better equipped than ever to maintain its place as the benchmark of the segment. Bad news if you’re a rival; good news if the lease on your current 5 Series is about to come to an end.