The Buick Encore was an early entrant into what has become a crowded and highly competitive subcompact luxury crossover segment. So in order to maintain its early lead, it gets a few updates for ’17, that should help keep it Buick’s number one selling vehicle, as well as keep competitors on their toes.

We’ve been admirers of the Buick Encore since it first arrived for 2013. GM was clearly ahead of the small luxury crossover trend; but with so many other brands jumping into the segment, it didn’t take long for Encore to look a little stale. This 2017 edition is more than just a flashy refresh however, with significant updates that should have plenty of fans calling for another Encore.

But, starting with the sheet-metal, everything forward of the A-pillars is new. Most prominent is a rounder nose, sporting Buick’s new winged grille. Both hood and fenders are smoother.

This more modern design is clearly better looking, but we have to say it is also less distinctive than before. 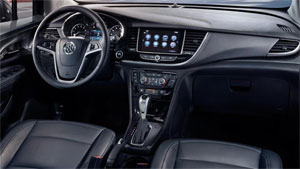 Inside, just about everything in front of the driver has been updated. The dash layout is enhanced, getting a more cockpit-style form, upgraded materials, and better fitment for the new 8-inch color touchscreen.

Some “built to a price” reminders remain, and it’s still nowhere near as luxurious-feeling as competitors like the Lexus NX; but all-in-all it’s a big improvement.

Keyless entry with push-button start are new; as are the 4.2-inch color info display in the gauge cluster, and available Apple CarPlay and Android Auto.

Rear seat room continues to be tight, but adult space is more than plentiful up front.

Cargo space remains merely adequate, at 18.8 cubic-ft., 48.4 with seatbacks folded; though the Encore is one of the few remaining vehicles that also has a fold-flat front passenger seat for toting longer items. 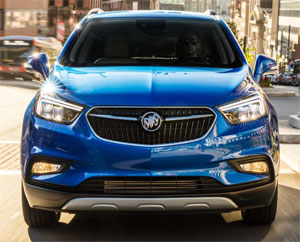 For 2016, Sport Touring trim arrived; and with it, more power for the 1.4-liter I4 turbo. It now outputs 153-horsepower and 177 lb-ft. of torque. The 138-horsepower version remains standard, as does a 6-speed automatic transmission; Active On-Demand all-wheel-drive is available.

While we didn’t find that base engine underpowered previously, the Sport’s added pep is much appreciated; especially for highway merging.  You feel like you have a little more control over your situation.

Now Encore is still not as refined feeling on the road as its larger Buick crossover siblings, but it is noticeably quieter than chassis-mate Chevrolet Trax.

Put it to the test at the track, this Encore gets to 60 well over a second quicker than the original, at 8.6-seconds.

There’s enough torque for a snappy launch, but things taper off pretty significantly on the top end. Factor in slow, momentum-killing shifts from the transmission and the ¼-mile seems to take a lot longer than the indicated 16.6-seconds at 83 miles-per-hour. Not exactly thrilling; but again over a second faster than before.

Nothing changes in the chassis department, so the surprisingly fun and nimble nature that we praised is still in effect. Here is where you notice the Encore’s Opel design roots the most. Push too hard, however, and traction control is quick to shut the party down.

Steering is quick, has good weight, and even decent feel. Body roll is relatively minor.

115-feet was our average stopping distance from 60, with good stability and only slight fade after repeated runs.

Government Fuel Economy Ratings for our Sport Touring all-wheel-drive are 26-City, 31-Highway, and 28-Combined; so our 27.8 miles-per-gallon average on Regular was right on. Slightly better than average for the Energy Impact Score, using 11.8-barrels of oil yearly with annual CO2 emissions of 5.2-tons.

Pricing starts at just $23,915, though for that you get front-wheel-drive only. The cost for adding all-wheel-drive varies as you escalate the trim levels from there. If you want heated seats, you’ll have to step up to Essence trim putting you close to $30,000.

Without a doubt, the Buick Encore has been a big success. So making it more appealing to more people seems like a no brainer. That’s what GM has done, and it’s sure to keep the band playing on.