Cadillac is as guilty as anybody for kicking off the large luxury SUV craze. Remember the first 1999 Escalade? Yet, Cadillac was slow to follow the market shift to luxury crossovers. So, even though their mid-size SRX is top seller for the brand, it lacks the wide spread critical praise of their cars. So, let’s see if that changes as Caddy’s reboots their crossover strategy with the all-new XT5.

Although on an all-new chassis, don’t think of the 2017 Cadillac XT5 as an all-new concept. Rather, it’s a continuation of what the SRX started; luxurious, tech-savvy transportation for 5, but this time with driving dynamics that more closely match their key German and Asian rivals.

Whether you’re a fan of the Crossover Touring re-naming strategy or not, hopefully Cadillac will stay consistent with it; as they expand from this midsize XT5 to, perhaps, a 3-row XT7, and compact XT3.

As for the XT5, it wears a face that’s a taller version of Caddy’s new flagship CT6 sedan. Both head and tail lighting have vertical orientation.

There’s less departure along the rest of the exterior, where some shades of SRX and even Chevrolet Equinox remain in profile and in the rear. Our Red Passion Tintcoated Luxury model had excellent paint quality. 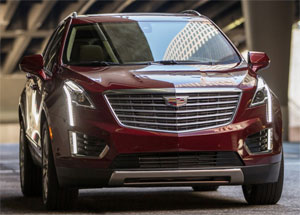 Compared to the SRX, there are 2-inches of added wheelbase; yet overall length is almost an inch shorter. It is also slightly taller and narrower. Standard wheels are 18s; 20s are optional.

But, driving is where you notice the biggest XT to SRX changes. Street and highway ride and handling are clearly not old-school Caddy. It’s decidedly European, even borderline stiff; yet compliant enough to eagerly soak up bumps softly. Following a recent and welcomed GM trend, close to 300-lbs. has been shaved and you feel the added responsiveness at every turn of the nicely weighted electric steering.

There’s no Euro-style turbo-4 power under the hood however, at least here in the U.S.; as Caddy’s LGX version of GM’s 3.6-liter V6 is the only choice.

And it’s a very decent one, delivering 310-horsepower and 271 lb-ft. of torque seamlessly; working well with the standard 8-speed automatic transmission. They make a good combo as long you’re not looking for an all-out performance ute.

Front-drive is standard, with a new twin-clutch all-wheel-drive system optional. It can send full power front or rear, as well as left or right at the rear axle. Slippery roads are its forte, but we found this flexible setup to be a welcomed aid in dry handling as well. Or, switch it off for best fuel economy. 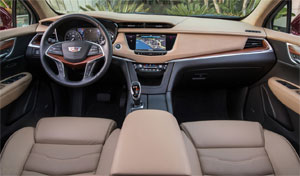 Inside, is a clean, simple, attractive design very similar to flagship CT6; with no shortage of tech and luxury touches. Trim, whether traditional wood or sportier bright-work, is exceptional.

You can chose from quite a few light or dark themes, our favorite being the classy Jet Black. And there’s much small item storage space around.

But we have to subtract a few points after dealing with the latest CUE infotainment system. It is fully compatible with Apple CarPlay and Android Auto and we love that. But after a long day of getting frustrated with the gesture controls, we could think of only one final gesture to give it. Caddy please give us a knob or two!

The gauge panel is not quite as tech-heavy as CT6, but still a nice info-heavy array, with the now-expected reconfigurable setup.

The front seats look great but need work. We found them hard, yet still lacking in all-day support.

Thanks to the extra wheelbase, the rear seat provides great leg room; not always a high point of this class. It slides and reclines too. Still head room can be tight thanks to an intrusive panoramic glass roof.

E-shifters are “en vogue” these days, and Caddy’s has logical and precise movement. A backup camera is standard, the CT6’s Rear Camera Mirror, and a full suite of active safety features are optional.

Government Fuel Economy Ratings for front-wheel-drive are 19-City, 27-Highway, and 22-Combined. For an average Energy Impact Score of 15.0-barrels of annual oil consumption and 6.5-tons of CO2 emissions.

The 2017 Cadillac XT5 will have a hard time standing out in the crowded luxury crossover segment. But truth be told, the retiring SRX actually did quite well with what it had, and we think the XT5 will do even better. It provides more luxury, more tech, and yes, a much more satisfying driving experience. It should appeal equally to both long-time and first-time luxury buyers, and bodes well for a future full lineup of crossover Cadillacs.