While the Cadillac Escalade may not get as many rap video cameos as it once did, it still has an undeniable bling factor, as well as a huge presence around country clubs and gated communities. It also has enough performance for most people that roll in those circles. But, there are always folks that want to set themselves apart from the crowd.  And, our friends at Callaway Cars have an app for that.

We like driving anything high performance around here, so when the mad mechanical scientists at Callaway Cars offered up this 2017 Cadillac Escalade SC560, we wasted no time accepting.

And this big rig is obviously designed exactly for those people with no time to waste.

All with Callaway’s TripleCooled intercooler to keep temps in check; carbon-fiber engine covers shield a high flow intake, and a freer flowing exhaust for exhaling after the combustion magic happens. 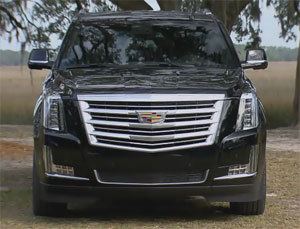 For better or worse, it’s hard to think of a more American vehicle than the Cadillac Escalade, and this SC560 seems to even further mock lesser utilities with every gallon of gas it blows through its tail pipes and every piece of pavement it dominates.

It’s also hard to think of a more perfect vehicle for anyone who has made it and wants to make sure that everyone knows it.

With its latest update for ‘15, the Escalade grew marginally larger, but its more “blocky” design makes it appear much bigger, yet it still somehow manages to look classy.

Other than some subtle badging, Callaway leaves the exterior alone. Though you can add these 22-inch black-chrome wheels if you must.

And if you can avoid spinning them up too much off the line, they’ll carry this supercharged, super-luxury ‘burb to 60 in 6.0 seconds flat.

Despite all that Cadillac has done to keep things quiet inside the cabin, the low restriction exhaust system overwhelms it as you streak down the track. There’s not much Callaway can do about the slow shifting trans; but high-rolling hot-rodders should be more than okay with 14.0-second ¼-miles at 102 miles-per-hour. 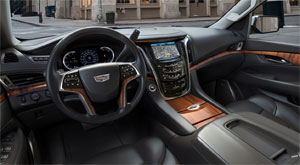 While it still glides over rough pavement with a lack of concern, this latest gen Escalade does feel a little more bolted down than before. And now thanks to Callaway, it has some serious muscle to fully exploit its more purposeful ride.

The interior is pure luxury, fully up to the standards of comparably-priced European utes.

Our Escalade ESV tester, being Suburban size, has a minivan’s worth of cargo space; and power elements to the lift gate and folding seats, means you won’t have to break a sweat in any way before you settle yourself down in some of the most comfortable seats this side of Volvo.

Callaway upgrades in here are limited to a build plaque and key fobs, but there are many other options available.

If only Callaway could have found a way to supercharge the CUE touch panel controls out of existence, then we’d really have something.

Overall, it does feel like a nicely executed real truck, as the Callaway upgrades take nothing away from the recent strides GM has taken with their full-size platform. Rather, the supercharger just adds serious muscle to a frame more than capable of handling it. 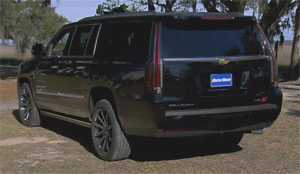 As much of a wonderfully powerful and luxurious experience as this is, it’s hard to imagine this vehicle appealing to Mercedes-Benz GL buyers. Though Cadillac clearly thinks the Escalade has “escalated” to that level with a base price of $74,390. The base SC560 package from Callaway tacks on $17,995 on to any GM full-size SUV. So adding all of the Callaway goodies to this $96,000 ESV, which we highly recommend, you’re looking at around $115,000.

The powerfully sophisticated 2017 Callaway Escalade SC560 is clearly a high-performance high luxury item. And like many such things, lots of people can understand the appeal yet very few will ever get to experience it. And of course there are some who just won’t get it at all. For them, last time we checked, Toyota is still building lots of Prius’ every day.