Camaro fans may have noticed something missing from the lineup since the gen-6 launched last year. But most knew it was just a matter of time before a ZL1 would blast its way back onto  the scene. And boy has it ever. Boasting performance that your mullet-rocking neighbor of 30-years ago would never have dreamed of. So, here’s to the bow tie faithful everywhere, the 2017 Camaro ZL1.

The 6th gen. Chevrolet Camaro was an amazing transformation at the outset. As Chevy’s muscular pony car got smaller, lighter, and more powerful, it seemed that one-upping traditional rivals would no longer be enough. The 2017 Camaro ZL1 continues that world-class evolution, now with a whole heap of nastiness thrown in.

Okay, so it’s really not that nasty, but it does have some seriously new orneriness under the hood, courtesy of the Corvette Z06’s supercharged LT4 V8. Output is an awesome 650–horsepower and 640 lb-ft. of torque.

The exterior is also more menacing, looking seriously beefy, but with a sexy edge not typical for a muscle car. 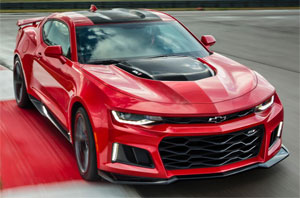 Crank it up, and it sounds hellacious, giving you an auditory taste of the performance potential that lies within. Perhaps the biggest news of all, is GM’s new Hydra-Matic 10-speed automatic transmission. That’s a lot of gears packed inside, but there are prominent paddle shifters mounted on the wheel.

That many ratios in play, did make for a different track experience. As out on Savannah, Georgia’s Roebling Road Raceway, we found ourselves triggering a few more shifts than usual.

Most cars manage this mostly high-speed, 9-turn track with 3rd, 4th, and 5th gears; but in the ZL1, we found ourselves shuffling mostly between 4th, 5th, and 6th, with an occasional click up into 7th.

Once initiated, those shifts are instantaneous, yet very smooth; as even mid-corner upshifts didn’t seem to upset the car in the slightest. However, the plastic shift paddles could use an upgrade to metal; as they didn’t feel worthy of a car with this much performance potential.

We came away more than impressed with the overall track performance of this ZL1. It was well-balanced, surprisingly neutral; with plenty of good feedback, as well as loads of power for charging out off of corners, accompanied by some insanely-sweet supercharger wine. 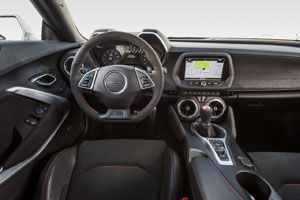 GM’s Performance Traction Management helps control the power delivery; and with multiple settings it’s easy to find one that works for you.  In its least intrusive settings, it works really well. Letting you get away with quite a lot until proclaiming “easy there, Hoss, let’s reel you back in here”; and doing so without hindering your momentum.

In fact, even with that much power heading to the rear wheels, we had to work really hard to get them to break loose. Copious amounts of throttle-on oversteer can be found, but it’s certainly not the ZL1’s natural tendency.

And speaking of abuse, no track car is complete without some decent brakes, and the binders on the ZL1 offered  phenomenal braking power. The 6-piston Brembos had us stopping swiftly and predictably, and never showed a sign of fading no matter how hard we worked them.

All-in-all, more fun than the proverbial barrel of monkeys; and the first Camaro we’ve been in, that warrants consideration as perhaps a better, more livable performance car than the Corvette.

It was fairly easy to get off to a good launch, and throughout the ¼-mile, the power comes on in unrelenting waves, as the transmission bangs through gears quickly and efficiently.

Sitting in the cockpit, the ZL1 offers a few unique touches; but it’s not a total transformation away from the Camaro’s basic setup.

You do get Recaro seats with red belts; and a suede treatment applied to the flat-bottom steering wheel, shift knob, and just about everywhere else. GM’s Performance Data Recorder is available.

Government Fuel Economy Ratings are 12-City, 20-Highway, and 15–Combined. Netting a gas guzzler tax and a very poor Energy Impact Score of 22.0-barrels of yearly oil use with 9.8-tons of CO2 emissions.

Owning the baddest Camaro on your block, obviously doesn’t come cheap; but you’d be hard-pressed to find more performance out there for less than the ZL1’s base price of $63,435. Maybe you could build a better one with that 25-grand over the base SS, but not likely.

The 2017 Chevrolet Camaro ZL1 is indeed an easy to love, complete track package; rather than just a muscle-bound brute of a machine. Without a doubt, this Camaro has blasted itself onto the world stage much like the Corvette did before it. But don’t worry, it hasn’t gone all super sophisticated on us, as there’s still plenty of American attitude lurking just below the surface, just waiting to be unleashed.