Ever since Ford’s Raptor burst onto the truck scene; we, as well as the Chevy truck faithful, have been waiting for a bowtie response.  Well, we’ve finally got one, but it’s not the full-size Silverado that we expected. so, let’s find out if the mid-size Colorado ZR2 is able to do more with a smaller footprint. 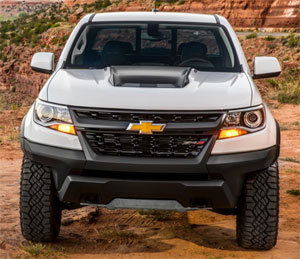 For 2017, Chevrolet does indeed have something aimed directly at insatiable off roaders, the Colorado ZR2.  We’ve seen the ZR2 badge before of course; on S-10 pickups and Blazers, and even on the ahem… Chevrolet Tracker in the 1990’s.  But it now seems to have much more meaning adorning this purpose-built rig.

We spent some time burning and breathing both gasoline and diesel fumes out in the dirt near Grand Junction, Colorado. We had plenty of fun with both, but wouldn’t complain if GM snuck some more power into future versions of the ZR2; along with quicker responsive from the transmission.

Suspension gets a modest 2.0-inch lift; but the biggest deal here is the Multimatic Dynamic Suspensions Spool Valve dampers, which are similar to those found in the Camaro Z/28.  Chevrolet says this is the first such technology in an off road truck. 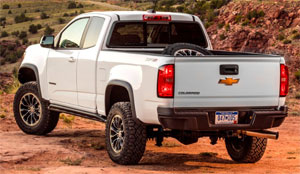 And we can attest it allows the ZR2 to literally glide over obstacles both big and small, as well as land softly after getting big air like a Trophy truck; all while you feel totally in control.

There’s nothing else quiet like it; sure you could throw Toyota’s full TRD catalog at a Tacoma and get close, but you’d pay a lot more and the ride quality would be a deal breaker.

Chevrolet went the sedate route as far as styling the exterior, no flashy brotastic graphics like the original Raptor; just minimal ZR2 lettering on the bed.  But it’s certainly more than your typical Colorado. There’s the distinctive power dome hood, and both front and rear are redone to handle steep terrain.

The stance is noticeable wider too, with plenty of skid plate protection added underneath.  Both crew and extended cabs are available, as are both short and long beds; a spray-in bedliner is standard.

A trailering package with integrated brake controller is also included, though due to all of the off-road upgrades, towing capacity is limited to 5,000-lbs. 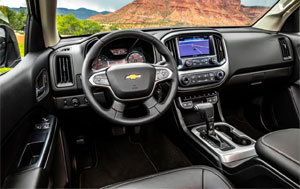 Not much visual change inside, which is a good thing if, like us, you appreciate the Colorado’s upscale, highly functional and quiet space; a bad thing if you’re looking for something a little flashier to show off to your friends or bare-bones rugged.

Much like the latest Raptor, the on road experience is surprisingly pleasant.  The ZR2 is not floaty at all; as those high-dollar dampers allow for quick turn-ins and keep cornering relatively flat.  Road noise from the tires is fairly subdued too.

While not exactly a direct competitor to the Raptor; as far as the total package goes, the ZR2’s “just right” size makes it a much more satisfying option for daily use, as well as easier to navigate in tight trails, though it certainly doesn’t have the Raptor’s monster motor under the hood.

Government Fuel Economy Ratings are 16-City, 18-Highway, 17-Combined for gas, and 19-City, 22-Highway, 20-Combined for the Diesel  which has the better Energy Impact Score at 19.1-barrels of annual oil consumption, with 8.4 tons of CO2 emissions.

Pricing starts at $40,995 for Extended Cab and $42,620 for Crew Cab; add another $3,500 for the diesel.  You could spend much less on a Colorado 4X4, but why would you? This beast of a bargain is now our top Colorado choice, at least until the price goes up!

The 2017 Chevrolet Colorado ZR2 is truly a do-anything truck; from rock crawling, to bombing across desert 2-track, to hauling your toys, taking the family on adventures, and even getting you to work on time every day in comfort; all while feeling like some crazy off-road Camaro. Well, done GM.