If you’re a fan of the Chevrolet Corvette, you know that there’s a big gap in both performance and price, between a standard Stingray and the high strung Z06. Well, you probably also know that that spot has now been filled by this Grand Sport. But, while the original 1960’s era Grand Sport was a pure track car, the 2017 version will spend most if it’s life on the street. So, let’s find out which side of the pavement pendulum this Grand Sport swings towards the most.

Even more to the point, does this 2017 Chevrolet Corvette Grand Sport really offer buyers something new, or is it just the return of something old?

Of course we’re referring to those aborted homologation ‘vettes of the 60’s, but there was also the limited release C4 Grand Sports that we all remember, as well as a few others over the years.

Of course, we could just as much be talking about the return of the Z06, as this Grand Sport is more in line with Z06 ethos than the elevated, current gen Z06.

As for all of its handling potential, this ‘vette is a very civilized car.  Yes, that’s largely due to Magnetic Ride Control that has vastly different manners depending on setting. But no matter the mode; the Grand Sport is not high strung at all, or as beastly-feeling as the current Z06.

Of course that’s because there’s something missing here, the Z06’s supercharged LT4.  Rather, the GS sticks with the base Stingray’s LT1 6.2-liter V8; though it does get the Z51’s dry sump oiling system and performance exhaust; so the numbers are healthy, 460-horsepower and 465 lb-ft. of torque.

Both the 7-speed manual and 8-speed automatic are available. 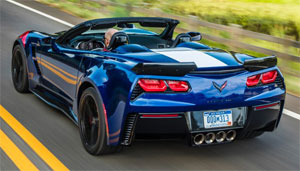 And, it feels plenty powerful. Even when cruising around in Eco mode, you feel like you have to restrain it. You won’t really miss what you’re missing, other than for Z06 bragging rights or stoplight hijinks.

Still, at our test track, even though we struggled for traction, the Grand Sport is still capable of shaving a tenth of the Stingray’s 0-60 time to 3.9-seconds. Completing the ¼-mile in 12.3 seconds at 116 miles-per-hour.

This was our first track time with Stingray’s 8-speed automatic, and it performed quite well. Shifts were both firm and quick, but not so much that we prefer clicking its paddle shifters over working a clutch and manual shifter.

So, while it may not have felt like a huge step up from the Stingray here on this track; our next venue revealed just how different it is.

There are not too many points here at Summit Point Motorsports Park’s Shenandoah Circuit where you can hold this thing wide open, but when you do it sounds amazingly viscous, especially if you’re in Track mode with all the baffles wide open.

And while you’ll have to lift when you reach one of its many corners; there’s so much grip here you won’t have to let off nearly as much as you think. 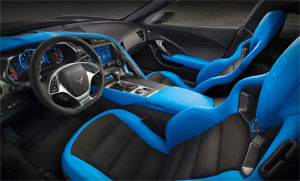 That’s thanks mostly to the Michelin Pilot Sport Cup 2’s that come with the same Z07 package available on the Z06, which also adds additional downforce and the like. But by far the best upgrade is the carbon ceramic-matrix brakes which are truly spectacular, offering serious late braking, with no signs of the wanting you to stop doing it.

Steering has great weight, and a tight radius leads to immediate results.

Now, the exterior looks almost identical to the Z06, which is to say tough as nails; though we’d prefer a less flashy color than this red and white combo, perhaps more along the lines of the traditional blue.

The available Heritage package features signature Grand Sport hash marks that are echoed both outside and in.

Nothing else is different inside, which means everything we like about the new Stingray is still here.

Government Fuel Economy Ratings with an automatic are 15-City, 26-Highway, and 19-Combined. But we averaged only 17.9 miles-per-gallon on Premium. The Energy Impact Score is just slightly below average at 17.3 barrels of yearly oil use, along with 7.9-tons of CO2 emissions.

So, whether we ever get that mid-engine Corvette that is once again in the rumor mill; we’ve got no complaints. As this Stingray’s impressive chassis has plenty of life left in it. And certainly no equal when it comes to price.

So, you could think of the 2017 Chevrolet Corvette Grand Sport as a lesser Z06, or you could think of it as more in the spirit of the original Z06; prioritizing handling and braking performance above all else. That’s both something new and old! Indeed, in a world over populated with special Corvettes; this one deserves its own country.  Let’s call it GrandSportistan, and leave it at that...fast!