Here at Motorweek, we don’t need some smug advertisement to tell us the benefits of a 5-door hatchback. Most Americans don’t either, as they’ve been snatching them up in record numbers for years, only those hatchbacks have been cleverly disguised as SUV’s and crossovers. So, what happens when Chevrolet gives up the charade and attempts to sell an honest to goodness hatchback? Let’s take a “Cruze” and find out.

The days of Chevrolet selling 450,000 cavalier sedans every year here in the U.S. are long gone. And despite their latest compact, the Cruze, being way better than any small car fan ever thought possible, it still lags well behind leaders civic and corolla. Chevrolet hopes that broadening the portfolio will help, thus a brand new 2017 Chevrolet Cruze hatch arrives on the scene.

Riding on the new platform that debuted with the sedan last year; the front-drive Cruze hatch shares the 106.3-inch wheelbase, yet loses over eight inches of overall length, making it a much tidier and stylish package. It also makes our Mexican assembled Cruze more appealing to its primarily overseas markets. 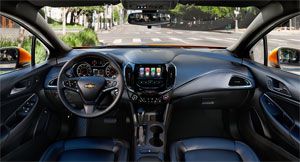 Things look the same as here up front, but vastly different out back. The available RS package ups the sport-factor with aero add-ons, fog lamps, and 18-inch wheels.

Of course inside is where you’ll see the true benefit, as cargo capacity climbs from the sedan’s 13.9 cubic-ft of trunk space, to 24.7 behind the hatch; that’s more than the Trax crossover. 47.2 is the max, with the rear seatbacks folded.

That’s why small hatchbacks are so popular in the rest of the world.

Most everything in the front of the cabin is the same as the sedan.  Which means better material quality than some luxury brands; as well as artful dash and door sculpting. It’s proof that you don’t need to spend a lot of money to make a good looking mobile space.

There’s plenty of tech as well, nicely integrated without eliminating basic manual controls. Between all of the logically-placed switchgear, Mylink touchscreen interface, steering wheel controls, and voice command; options for getting your Cruze to do what you want it to do, border on overkill.

The I.P. in front of the driver is very attractive, with gauges that are both clear and comprehensive. 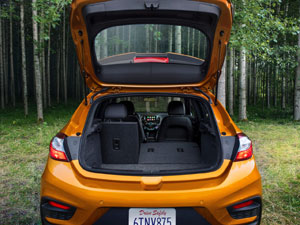 Seats are impressively comfortable for a compact, despite an overall sporty feel in the cockpit.

Not much partying going on in the back seat, as both leg and headroom are at a premium; and the seats are relatively hard.

That aside, the Cruze offers one of the best small car interiors out there.

As for driving, ride quality is also very good, and the Cruze is easily one of the quietest rides in its class; unless you find some really rough pavement. However, there’s not as much of the performance bent that you’d find in a Volkswagen Golf or Mazda3.

It felt mostly numb through our handling course, steering that was quick and very light, and grip was actually fairly decent throughout, with body roll kept well in check.

As for acceleration; well, the Cruze hatch is saddled with same 1.4-liter turbo found in the Trax crossover. So, things are less than spirited, even gutless off the line. But, at least we didn’t have to worry about torque steer or wheel spin on our way to 60 in 8.0-seconds flat.

Of course not much is to be expected, working with only 153-horsepower and 177 lb-ft. Of torque.

The standard 6-speed manual may have helped it at least feel a little quicker, but our car was equipped with the optional 6-speed automatic. It ran through the gears very smoothly as we worked our way to the end of the ¼-mile in 16.2-seconds at 88 miles-per-hour. 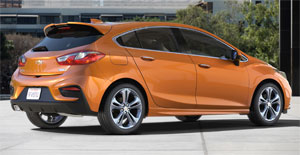 Nothing at all to complain about from our braking test. We averaged stops of just 102-feet from 60. The pedal had a nice firm feel, and there was minimal fading.

The automatic achieves government fuel economy ratings of 29-city, 38-highway, and 32-combined; though we averaged just 31.4 miles-per-gallon of regular in mixed driving.

Still, that makes for a better than average energy impact score of 10.3-barrels of yearly oil use with CO2 emissions of 4.6-tons.

The Cruze hatch is available in mid-level lt and up-level premier trims only, starting at $22,115. That puts it about a grand over its lt sedan counterpart. Premier starts at $24,820; and adding just about every package available pushes it close to $30,000.

Like a few other manufacturers recently, Chevrolet thinks that Americans are finally ready to embrace hatchbacks, even if they don’t come with all-wheel-drive. This 2017 Cruze hatch makes a good case that there’s plenty of practicality to be had here, as well as unique style. So, now that Chevrolet has “hatched” a new Cruze, we’ll keep an eye on it; to see what it grows into from here.