There were quite a few people that were excited to hear Chrysler was bringing back the Pacifica. Until they found out that FCA wasn’t actually bringing back the Pacifica crossover utility, but rather putting the name on an all new minivan. Talk about bait and switch! But before you switch off your interest, there’s a lot to love about Chrysler’s new generation people mover.

From the folks that brought us the original front-wheel drive minivan, comes the 2017 Chrysler Pacifica. Yep, you won’t have the Town & Country, or Dodge Grand Caravan to kick around anymore. But, while the sales heyday of minivans is past, there is still a sizable market for this most useful of vehicle types with over 500,000 sold last year.

And, the Pacifica’s all-new platform comes with all the next generation improvements you might expect, from ride and handling to advanced user friendly technology.

As for fuel economy, never a minivan strong suit, the big news is a Pacifica Hybrid with an 80 MPGe rating. It has a 16-kWh lithium-ion battery working, along with all of the necessary hardware, in conjunction with the standard 3.6-liter V6 engine.

Which is the latest version of FCA’s Pentastar, now outputting 287-horsepower and 262 lb-ft. of torque, through a 9-speed automatic transmission. 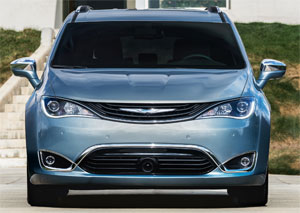 The hybrid won’t be offered until later this year, so we spent most of our early drive time at the national press launch in California aboard the mainstream, gas-only powered Pacifica.

We can agree that ride and handling are much improved; and perhaps more importantly, things have gotten a lot quieter inside the cabin. But much higher on the list of pleases for most families will be the techie gadgets!

In addition to the 8.4-inch UConnect touchscreen for managing things up front, there’s Uconnect Theater for rear seat passengers, featuring dual 10-inch high def. touchscreens. And you can upgrade audio to 13-speaker Alpine, or even 20-speaker Harmon Kardon, to hear the the best of everything.

Surround view cameras, parking assistance, and various autonomous safety systems are offered too; and since Honda made an onboard vacuum a must have accessory, Pacifica has one as well.

And in an attempt to out clever them all, the hands free, foot wiggle opening treatment gets applied to the side sliders as well to the rear lift gate.

Available as either 7 or 8 passenger, the space inside is cavernous as you would expect. Stow ‘n Go seating is more comfortable plus easier to use, thanks to the addition of Stow n’ Go Assist which slides the front seat out of the way with the push of a button. 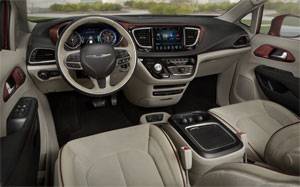 The 2nd row seats pivot forward to allow much improved walk-in style access to a third row seat with optional power recline. It’s impressively suitable for kids of all ages. As for the parents up front, their seating delivers a big improvement in long haul comfort.

Dash design is simple with a packed central control pod that includes Chrysler’s rotary gear shift. This allows a semi-open front floorplan, even with a huge storage console between the seats.

Along with 32.3 cubic-ft. of cargo capacity, and that’s behind the 3rd row! Folding those seats into the floor gets you 87.5 cubic-ft. of space. Stow the 2nd row for 140.5 cubic-ft. No crossover can touch that, though it’s still 5-7% less than segment rivals Odyssey and Sienna.

Beauty is subjective of course, but among the current crop of minivans the Pacifica is the most attractive. Still, you can only do so much and maintain the total practicality of a box on wheels.

The front fascia closely resemblance the Chrysler 200 sedan, and from there the wedge shape widens to full box, before tapering down slightly at the rear. 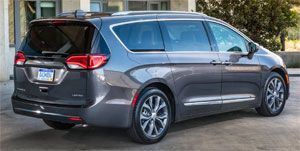 Side body lines and the uninterrupted flow of the greenhouse are elegant touches that go a long way to keep things interesting, and as closely resembling a crossover as possible. It’s certainly tall looking from the rear, but also flat and smooth.

Pricing undercuts the Asian competition just a bit, starting $29,590. We think the hybrid will start in the mid-30s.

It’s hard to imagine the 2017 Chrysler Pacifica having an easy time of it, as FCA is not only launching a new vehicle into a shrinking segment; but they’re forgoing Town & Country and Dodge Grand Caravan name recognition. Then again, the new gen Pacifica is aimed at a new generation of buyers, ones who might think crossovers are yesterday’s news. If that turns out to be true, this ocean-size people-mover has what it take to make a very pleasant voyage.

It’s only been a little over a month, but we’ve already seen a lot of scenery in our 2017 Chrysler Pacifica Limited minivan. The odometer rolled past 2,900 miles during our annual winter testing trek to Savannah, Georgia. Naturally, there’s plenty of room for a road trip, and stow-and-go seating makes changing from people to cargo a breeze.

The rear seat entertainment system came in handy while traveling down I-95. But, after 10 hours one staffer longed for a little more front passenger seat comfort.

The Chrysler Pacifica has won numerous awards, including our own. Now, we’ll see if the accolades continue as we spend the rest of 20-17 behind the wheel.

We’ve put another 23-hundred miles on our 2017 Chrysler Pacifica minivan, over 5000 total. And, it’s a comfy ride, no matter where you sit. Second and third row seat support are greatly improved over the last Town & Country we drove.

Just about everything about the Pacifica works like a premium vehicle; the stow-n-go seats, the power sliding doors and hatch, the Uconnect system, and radar cruise control. It’s pretty quiet inside too, until you drive on coarse asphalt. Then it’s like a boom box.

We wish the heated steering wheel warmed up all of the rim’s surfaces. The outer fabric gets toasty… but the hard inner ring stays ice cold.

A third row power seat did get stuck. An errant floor mat in the storage well triggered a sensor. As that could have been a child, this safety feature worked great.

Mileage from the 287-horsepower 3.6-liter V6 stands at 22.9 miles per gallon, although we saw over 28 during interstate cruising.

We’ve put another 28-hundred miles on our 2017 Chrysler Pacifica minivan. That’s over 8,000 total in just three months, with consistently high marks for comfort, roominess, and versatility. 3 crew members, their luggage, camera and lighting equipment packed into the Pacifica for a-thousand mile road trip… no problem.

This time around mileage from the 287-horsepower 3.6-liter V6 was 20.7 miles per gallon, although our overall average is a solid 22.1.

We’ve reached the halfway mark in our year with the 2017 Chrysler Pacifica. The wheels have rolled 10,820 miles since it arrived. We continue to be impressed with the chassis and powertrain. They’re easily the smoothest combination of any minivan we’ve tested yet.

The Uconnect system remains a strong point. The ride is confident and comfortable. Stow and Go seats are easy to use, but when they’re all out of the way…we notice more road noise… which is to be expected with such a big open space.

This time around mileage from the 287-horsepower V6 was 22.9 miles per gallon… which is our best so far. Overall we’re seeing 22.3.

Our 2017 Chrysler Pacifica sure is handy for summer road trips.  We’ve put over 13-thousand miles on the odometer in just 7 months.

The 287-horsepower V6 9-speed combo continues to provide plenty of power with smooth shifts. Front row seat comfort is great, with a good rating for 2nd and 3rd rows.

Chrysler’s unique second and third row stow-and-go seating feature turns out to a bigger plus with every trip, with numerous cubby holes for the odds and ends that accumulate on every vacation.

And, with our mercury hitting 100, the A/C handles the heat in just a few minutes.