We recently tested the Honda Civic SI and its new turbo engine. And we knew going in that this hot lick compact wouldn’t quite live up to everyone’s expectations. But, we also knew the SI was just a step towards the full bore Civic Type R that’s finally available here. What does this really mean? Only the fastest and most powerful Honda yet.

The perception that Honda builds safe, reliable, and mostly boring cars is widespread in America. But that perception doesn’t complete jive with reality, as the brand has fielded some very emotional cars over the years. Unfortunately, most of them haven’t been sold here. The most glaring example of that reality is the Civic Type R. Well, that all changes for 2017 when we finally get the best street performance Civic and Honda have to offer.

And it’s a lot! Over 300-horses from its unique 2.0-liter turbo I4, 306 to be exact, along with 295 lb-ft. of torque. It feels like it revs forever; okay maybe not as much as classic Si’s of the past, but Honda did keep a little V-TEC flavor in just for the faithful. 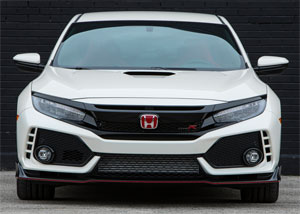 Transmission is a 6-speed manual; no automatic is available. It comes with automatic rev matching, which we found quick and helpful.

On the other hand, the stock Civic’s suspension is not so much tweaked as almost completely replaced. Up front is a new Dual Axis strut setup; and adaptive dampers are added all around.

Additional structural adhesives were also applied to body panels to increase stiffness over the base car.

And then there’s the exterior. Yes, all those aero-elements are intense; but more importantly, they are all functional, not just tacked on for styling purposes.

With the bigger engine and all of the additions, weight is up; though it still comes in under 3,200-lbs. And it remains a pretty practical beast as the Type R comes as a hatchback only. 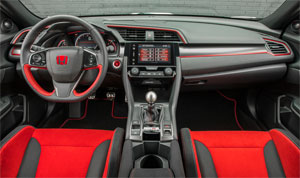 The atmosphere is very sporty sitting behind the wheel, with well-bolstered seats that feel like they were lifted from an Italian exotic.

Other Type R specific elements inside include a red and black theme, carbon-look trim, and Type R logos.

Overall, the interior appears sparse and purposeful with a nice thick wheel for gripping; but looking around, you’ll find all the expected amenities including a simple to operate infotainment system.

Off the line, there’s no lag; just a healthy punch of torque. And despite being one of the most powerful front-wheel-drive cars you can buy, we found virtually no torque steer. Honda makes no claims for the 0-60, but our seat-of-the-pants-meter puts it at about 5.0-seconds.

The ride is compliant, and not too harsh, almost typical Honda; until you trigger the +R drive mode which really makes the magic happen, by stiffening the dampers, quickening throttle response, setting stability control to its least intrusive nature, as well heavying up the steering.

If you’re lucky enough to buy one of these things, by all means, take it to a track day, or at least autocross the heck out of it. It feels well-planted in corners, and turns in beautifully.

The Type R has a selective braking-type performance enhancer that can feel jarring at times, but in their traditional role, the 4-piston Brembos can still do some serious stopping. They’re great!

ZACH MASKELL: “There’s three main things that you need to remember when you’re coming into a turn on the racetrack. First of all, you want to brake and you want to finish your braking before you start your turn. Then you coast a bit, and then you want to come out as fast as humanly possible. I love the Type R because it almost seems like every turn that I come into, the more I learn the car, it lets me get on the gas earlier and earlier every time.”

Base pricing is $34,775. Some may have a problem spending that much on a Civic, but this is no ordinary Civic. And for those that have been waiting for this one, it’s not lot of money at all for a performance car that can feel equally benign or nasty.

We’ve waited 20-years for this time to arrive, and there is absolutely nothing here to be disappointed about. The 2017 Honda Civic Type R doesn’t feel like a tuned up Si; it feels like a brilliant, purpose-built performance machine that just happens to have a Honda badge on it. Those that felt the Civic Si didn’t go far enough, will find exactly what they were looking for here. We sure did.