I really don’t know much about voodoo, other than it’s something that’s a bit scary and potentially evil. You know, much like the Dodge Viper! So, it’s only fitting that as the Viper once again exits the new car stage, it does so with a Voodoo II Special Edition ACR. So let the spirits be with us, as we tempt fate one final time in Dodge’s venomous Viper!

It’s not too often a car celebrates its 25-year anniversary while also commemorating its final year of production. That’s the unfortunate situation of the 2017 Dodge Viper and our VooDoo II Edition ACR.

Consulting Google will tell you that the original Viper Voodoo Edition ACR was a special model limited to just 31 examples for the 2010 model year, right before the Viper went on its 3-year hiatus.

This VooDoo II Edition ACR celebrates that original, and likewise will be restricted to just 31 copies. And, FCA delivered the very first one off the line to us, at a race track no less.

So, we wasted no time getting out and on with it at; naturally, our winter proving grounds; Roebling Road Raceway outside Savannah, Georgia.

And yes, this Viper is still a little intimidating, yet oh so capable.

As we noted in our last Viper ACR test, the American Club Racer comes with just about everything you need to be considered a true track car except for a roll-cage. There are multi-adjustable Bilstein shocks, a more aggressive suspension alignment, huge carbon ceramic matrix brakes, bespoke Kumho race compound tires, and the most aero treatments you’ll find outside of an airport. 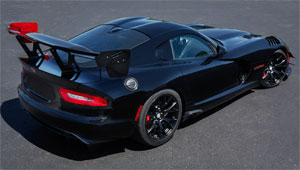 Vents reside on top of the front fenders to allow some air to escape, or they can be removed entirely for maximum airflow.

All of it works together to provide amazing grip. And, this latest ACR went after track dominance with a vengeance, making a case that the Viper no longer had to be a handful just to prove its merits.

It’s a locked-down, properly set up, single-purpose car; that is able to put its monstrous power and direct steering to good use, providing a near perfect track experience. As the harder you push it, the better it responds.

Likewise, the brakes showed no signs of fading or wavering; no matter how hard we worked them.

Essentially, the VooDoo II ACR is simply a blacked-out version of the ACR with metallic red-trimmed stripes plus about every available ACR option.

All the Viper trademarks are still here as well; crosshair grille, long bulging hood, and of course side pipes expelling exhaust from that old-school pushrod V10.

And that unique sound! It’s more like a monster truck than a high-performance car, but we’re not complaining.

Horsepower is 645, and there are 600 lb-ft. of torque attempting to deploy to the pavement.

The Viper may have allowed traction control and ABS to slip in over the years, but there’s still a Tremec TR6060 manual transmission ahead of the drive shaft, and a big ‘ol ball shifter for manhandling it.

Inside the cabin, there are the usual metal pedals, though foot room is still at a premium down there. You’ll also find the checkered-flag Alcantara material, bronze-like plastic trim, and the unique Voodoo II silver stitching. It may not be the greatest design theme we’ve experienced, but it is special.

Elsewhere inside, you’ll find SRT Performance pages on the touchscreen, and just about everything else you’re looking for in a modern car.

There’s a launch control button right on the steering wheel. Hit it, mash the gas, say a quick prayer, and you’re off to a skating 0-60 time of 3.6–seconds.

The search for true traction seems to continue the whole ¼-mile, and if all goes right and you’re able to stay on the gas, you’ll arrive at the end of the ¼ in one piece, in 11.7–seconds at 128 miles-per-hour.

The shifter works the same way it always has, no need to be gentle with it, as it works better the more you mistreat it.

But yes, the Viper still mistreats the environment with Government Fuel Economy Ratings of 12-City, 19-Highway, and 14-Combined.

Ironically, the last Viper is by far the greatest Viper. As after years of being the “barely controllable beast from the midwest”, it has matured into a fantastic track car that gets by pretty well as a street car when you need it to.

So, “get ‘em while you can” is the mantra here, as Voodoo IIs sticker for $135,290; and once they’re gone, they’re gone.  As will all current Viper models. Although, Fiat-Chrysler has not ruled out a much more modern Viper somewhere in the future.

Still, after a ¼-century of V10 Viper-madness, with this 2017 Dodge Viper VooDoo II Edition ACR, we’re saying goodbye to the Viper once again. But what we’re really saying is… come back soon!