While Fiat is well known worldwide for their diminutive 500, or cinquecento; it’s the 124 Coupe and Spider that first introduced most Americans to the brand back in the late 60s. And after using the 500 to re-introduce themselves here in the states, Fiat has now launched an all-new 124 Spider for us to enjoy. But this is no throw-back two seat Italian sports car!

Up to now, the cars making up Fiat’s U.S. return have indeed been diminutive, mostly economy-minded affairs. But, the overall effect of Fiat’s return has been anything but small, merging with Chrysler in 2014 to create Fiat Chrysler Automobiles. And now things get a whole lot more exciting with the 2017 Fiat 124 Spider.

Now this is where we tell you that this 124 is actually built on the same chassis as the Mazda MX-5, and further, comes out of the same Japanese plant. But this is far from a story about international badge engineering. They really do look a lot different, at least outside, especially when parked next to each other. Where the MX-5 has gotten meaner looking over the years, the 124 looks classy; with a nicely modern update of 60’s Italian-style.

The 124 Spider certainly has a sporty character; but instead of begging you to seek apexes, it yearns for mountain passes, and a more relaxed Grand Touring pace. It’s less edgy and more compliant; a kinder, gentler, and softer MX-5 if you will. Very reminiscent of the first Miata. 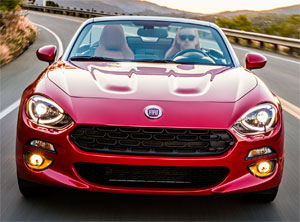 The engine is another clear departure. In place of the Miata’s naturally-aspirated 2.0-liter is the same 1.4-liter MultiAir turbo-4 found in other current Fiats, including the raucous 500 Abarth. Here it spins up 160–horsepower and 184 lb-ft. of torque.

It winds up quickly. But, despite more horsepower and torque, an increase in size and weight makes the 124 a tad less spirited off the line than the MX-5, though the exhaust note adds to its much enjoyed Italian flair.

And it surely fits in with the character of the original 124 Spider, which was an everyman’s take on a Ferrari.

Our tester came with the optional 6–speed automatic in place of the standard 6-speed manual. It worked well enough, with smooth shifts; but really could use some paddle shifters for truly living out the Italian dream. Yes, you can shift manually with the shifter itself, but it’s just not the same.

After taking a few trips through the cones, our early impressions were confirmed; the 124 Spider does respond softer than a Miata. 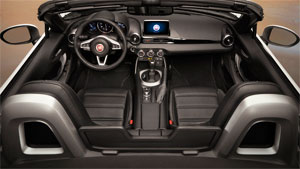 Steering is numb feeling, but accurate; and there’s always the possibility of snapping the rear loose; as even with the cushier feel, the car remains plenty responsive.

But while unique outside and under the hood, the interior is another story. It’s almost a direct MX-5 copy, including dash-top infotainment screen that responds to touch and a console-mounted controller. To get navigation, you have to opt for Lusso trim and then add the Premium Collection Package.

The 124’s gauges look great and steering wheel placement is just about perfect.

Also there’s still no dash-mounted glove box, rather a storage bin in between the seats, but you do get an outside trunk release. And, with 5 1/2 inches more length, there’s more room in the 124’s trunk, 4.9 cubic-ft. versus the MX-5’s 4.6.

And we love the fact that top operation is still 1-hand fold down simple; thank you Fiat for not complicating that. 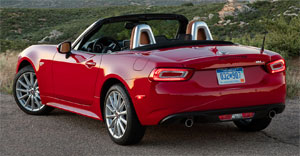 Government Fuel Economy Ratings are 25-City, 36-Highway, and 29–Combined. We averaged just 27.1 miles-per-gallon, and this tiny turbo does require Premium.

The Energy Impact Score is still good however, at 11.4-barrels of annual oil consumption with CO2 emissions of 5.0-tons.

There are 3-models of 124 to choose from, starting with Classica at $25,990. For what it’s worth, that makes it the lowest-priced turbocharged convertible in America, but also $240 more than a base MX-5.

So overall, if you like the MX-5, you’ll like the 124. Though, while clearly not politically correct, we do think the 2017 Fiat 124 Spider will easily appeal more to female buyers; though it will certainly attract fans of the original 124 as well.

Mazda says that without the Fiat partnership for the 124, a new MX-5 might not have happened. Now that would have been a calamity. So, we’re ecstatic that Fiat decided to bring back the 124 Spider, for a global tie-up that everyone who loves to drive should go out and celebrate.