Nothing’s hotter than small crossovers right now. So Ford probably could have kept business as usual for their compact Escape and been just fine, as they sold over 300,000 of them in the U.S. last year. But that’s not how things work at Ford these days, or the auto industry in general; so for 2017, a freshened Escape drives into the scene.

Base S Escape’s come with a normally aspirated 168-horsepower 2.5-liter I4; in front-wheel-drive only. SE and Titanium trims comes with Ford’s 1.5-liter EcoBoost with 179-horsepower and all-wheel-drive is available. 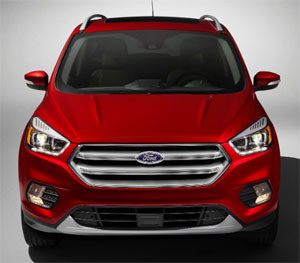 Also optional, is this 2.0-liter EcoBoost which rates 245-horsepower and a stout 275 lb-ft. of torque. All engines work with a 6-speed automatic transmission; max towing is good for the compact class, at 3,500-lbs.

The 2.0-liter feels plenty peppy on the street with gearing clearly designed for acceleration. We actually got complaints of this being too much engine for this vehicle; highly unusual from our power-hungry crew. But that was mostly due to the overachieving stability system. It becomes very problematic when attempting a strong launch, finding the balance between too much control and too much wheelspin with it turned off. It feels faster than the 7.6-seconds it took us to hit 60; especially, as once the transmission hits 2nd and gets good traction it really takes off.

Shifts are very smooth; but even in Sport mode, a touch slow for our tastes. We finished out the ¼-mile in 16.0-seconds flat at 85 miles-per-hour.

Through our handling course, it was light and agile; comfortable and solid for a compact ute.

A 107-foot average for braking from 60 is quite good; but there’s a very artificial feel to the pedal, and some aggressive pulling to the side on initial braking, keeps the results from being perfect.

Speaking of stopping, the Escape adds a new standard stop/start system with all EcoBoost engines, and we found it to work quite smoothly. 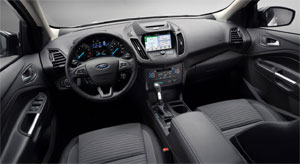 Changes to the interior of the newest Escape consist mostly of a reconfigured center console, that swaps the big parking brake handle for an electronic switch, moving the shifter back for easier access to lower stack controls, and for plugging things into the USB port and power outlet. Wrapping the revisions up inside, is a new steering wheel with revised switchgear.

Seating is a “tale of two spaces” with abundant room and coziness for those in front, but marginal legroom and comfort for rear seat passengers.

Forward collision warning, as well as lane-keeping are available, but not autonomous braking.

The new Escape looks physically bigger, due to a taller grill and redesigned hood that also gives it a friendlier, less aggressive tone.

Not much else changes outside. A hands free power lift gate is optional; and behind it you’ll find a decent 34.0 cubic-ft. of cargo space, maxing out at 68.0 with the rear seatbacks folded. 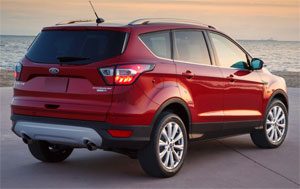 Government Fuel Economy Ratings for our front-wheel-drive 2.0-liter are 22-City, 29-Highway, and 25-Combined.  Our average was almost right on at 24.5 miles-per-gallon of Regular.

Escape pricing falls right in line with the rest of the segment, starting at $24,645; and reaching into the low 30s. All-wheel-drive costs $1,750 more.

With an all-new and terrific Honda CR-V, and better-selling-than-ever Nissan Rogue on the prowl, we applaud Ford for seeing that meaningful mid-cycle changes were critical for the 2017 Ford Escape’s success. It is now about as techno-savvy as the compact utility segment gets, and certainly a fine choice in the ever-more crowded crossover world.