Whether you’re talking Ford GT, Shelby Mustang, or Focus RS; ford seems all about performance these days. And they’re not leaving the F-150 out of the equation either, with an all-new raptor. the first gen Raptor was an extreme off-road machine that caught everyone by surprise with its popularity, even Ford. So, let’s find out how more thrilling things can get with Raptor 2.0.

Much like the first generation Raptor, this 2017 Ford F-150 Raptor, is packed full of off-road specific upgrades to turn America’s number-1 selling vehicle, into a desert-ruling rock hopper capable of more than just about any other showroom stock rig.

Under the hood is the Ford GT’s 3.5-liter twin-turbo V6. If it’s good enough for LeMans, it’s good enough for us here. Where, it whips up 450-horsepower and 510 lb-ft. of torque, more than the previous 6.2-liter V8. The jury’s still out on how this turbo-6 will play in a V8-crazed macho truck world, but Ford has already set the stage with wide acceptance of their EcoBoost V6s. 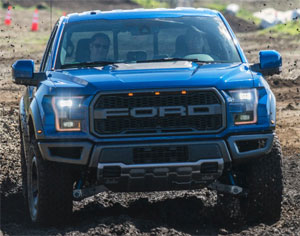 The 10-speed auto tranny crams 4-more gears into a case not much bigger than the previous 6-speed. You can shift it with the shifter, paddles, or let it make up its own mind. In Sport mode, it does less hunting, feeling more like a serious 5-speed.

This is the first Raptor since the F-150 went mostly aluminum, and it is indeed 500-lbs. lighter, though still weighing in at around 5,500-lbs. The still steel frame is stiffer than before; in total giving this Raptor a whole different vibe. It feels much more sophisticated and less of just a cobbled together brute.

The comprehensive Terrain Management System has a wide variety of settings, or you can just lock everything up and roll through or over just about anything. Ford actually allows you to have as little or as much control as you want.

Steering modes do more than just artificially tighten things up, you do truly get more feel through the wheel in Sport.

New, larger diameter Fox shocks have almost 2-inches more travel front and rear to aid in crawling over the slow terrain, as well as keep from bottoming out through the high speed off-road stuff.

That carries over on-road with a still firm yet more compliant ride that is smoother for all-day long highway use. 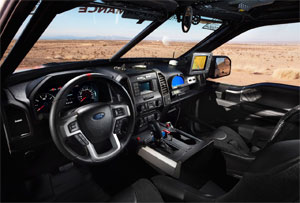 That’s helped by no lack in creature comforts for this metrosexual, including well-bolstered seats, sport steering wheel, and all kinds of tech goodies. But, some may lament the fact that unique Raptor touches to the interior are few.

The SYNC3 infotainment is much improved, but maybe it’s just because you never actually have to use it, with so many redundant controls added back in; and indeed there are plenty of knobs and switches on the dash.

We think the exterior is much more subdued than the original, as Ford seems to be trying to further broaden its fan base. It’s still a big climb up into the cabin, though.

Now, it may not sound as thrilling idling on the line, but launching off it, torque from this twin-turbo comes in like a wrecking ball. Even on a superhot and humid day, we hit 60 in 5.8-seconds, almost three seconds faster than in the original 5.4 V8 Raptor.

Burning down the track, the 10-speed is not as busy as you’d expect. There is a bit more shifting, but it’s mostly imperceptible; keeping the engine on the boil the whole way through the 14.5-second ¼-mile at 96 miles-per-hour.

Government Fuel Economy Ratings are certainly better with the V6, coming in at 15-City, 18-Highway, and 16-Combined. Our average?16.5 miles-per-gallon of Regular.

It’s hard to say that the Raptor’s base price of $50,560 is a bargain. Still in a market where half-ton pickups sticker for 70G’s and more, it’s a heck of a lot of truck for the money.

The Raptor is still a unique animal, as neither Chevy nor Ram offer a true full-size competitor to this off-road take on a Ford GT. But perhaps what’s most amazing, is how this Raptor 2.0 has transitioned into one vehicle that can truly do it all, and that includes comfort and solitude that Jeep Wranglers could never touch. We may not be as surprised as we were by the original, but this 2017 Ford F-150 Raptor is still one very special truck.