The 2017 Ford Fusion has gone through a significant fine-tuning of late; and getting right to it, the interior control area has really been cleaned up, with a new rotary shifter, freeing up lots of space in the console.

Fusion also gains a new high end Platinum trim, boasting more luxury touches than ever before. But even better news, if you’re a fan of actually driving like we are, is the new Fusion Sport.

It adopts the Edge Sport’s twin-turbo 2.7-liter V6 EcoBoost; putting out 325-horsepower and a very beefy 380 lb-ft. of torque. A new 6-speed automatic transmission with paddle shift is included, and all-wheel-drive is standard. 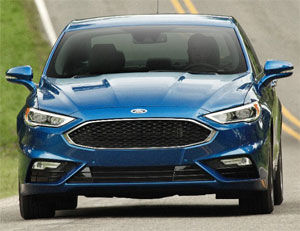 But, it is the solenoid valve controlled continuous damping system we applaud most, a first for this segment, with pothole detection that instantly adjusts fluid flow to minimize impact. It provided a notably smoother ride than typical for an affordable four-door.

When Sport mode is dialed up reaction becomes more aggressive. It also tweaks steering feel, transmission shifts, throttle response, and even exhaust note. We liked it so much we recommend leaving it in Sport mode all the time.

As for how this Fusion improves your driveway’s style; the Sport does away with the typical Fusion Aston Martin-inspired grille; and in its place is a glossy black mesh number. Just part of a whole new front fascia that has a much snarlier look.

In back there are quad exhaust outlets and of course a spoiler across the deck lid.

For you to enjoy inside, are upgraded sport seats with sueded inserts; and carbon fiber-like trim.

Our street driving impressions are quite favorable, as there is certainly less roll here than we’ve encountered in any Fusion prior to this.

And at our track test, those good vibes were confirmed; as the Fusion Sport is easily a top handler in its segment. With the exception of the Dodge Charger Hellcat, this is the American sport sedan that we’d prefer to park our butts in right now. 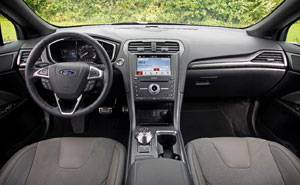 But, it’s not yet a threat to German dominance. While Fusion Sport’s all-wheel-drive system is highly effective at rotating you around corners, you can really feel it working a little too much; it’s not a seamless Porsche-like system. Still, it does close the capability gap more than a little.

And, the Sport is quick off the line for sure, getting us to 60 in 5.3-seconds. There’s an exhilarating amount of low end torque at launch, and it just keeps getting poured on from there.

Shifts were Jaguar-like in their speed and smoothness, and we cleared the ¼-mile in 13.9-seconds at 99 miles-per-hour.

Possibly our biggest complaint is the sound of the car. There’s plenty of it in the cabin, which is not a bad thing; it’s just a very obviously synthesized sound being pumped into the cabin.

Brakes, with an only-reasonable average stopping distance of 120-feet, are another reminder that this is still a 2-ton family car at heart.

One final update for ’17 Fusions, upgraded safety systems including autonomous braking. The system provided plenty of early warnings, but actual brake application was a little inconsistent; sometimes bringing us to a full-stop against our barrier, and sometimes not.

Government Fuel Economy Ratings come in at 17-City, 26-Highway, and 20-Combined; so our average of 24.1 miles-per-gallon of Regular was quite good. With a fairly average Energy Impact Score of 16.5-barrels of oil use, along with 7.3-tons of CO2 emissions, annually.

Base pricing, at $34,350, is about 10-grand over a base Fusion; but it’s hardly worth comparing the two as they are really totally different cars.

We’ve recently praised a fair number of new mid-size family sedans for their improved driving competency. But the 2017 Ford Fusion Sport goes the furthest yet, without leaving affordability and practicality on the table.

Indeed, the Fusion Sport raises the performance bar for mainstream four-doors to almost European Luxury-Sport levels. That’s high praise, and why we recommend anyone still “car” shopping, to give it a very close look.