One constant you can put up there with death and taxes, is people always want more. So, it’s usually the case for each new generation of vehicle to get bigger and bigger. Well, GM has proved before they’re not afraid to give people more from less, and that’s the story behind this new GMC Acadia, so let’s hear more about it.

Trivia question: what was the first modern 3-row crossover? If you said the 2007 Saturn Outlook, congratulate yourself. If you said the 07’ GMC Acadia; well, you’re half right as it did share its chassis with the Outlook. And if you’re saying “what is a Saturn?” Well, you’ll have to google it, as we must move on and start talking about this 2017 GMC Acadia.

Trim is in, and no one has been on more of a weight-loss kick than General Motors. Now sharing a chassis with the Cadillac XT5, its 700-lbs. lighter than the outgoing Acadia. That’s due to a shrunken exterior size, more high strength steel, and a smaller 193-horsepower 2.5-liter I4 engine that is now standard. But, even with the V6, it’s some 600-lbs. lighter. 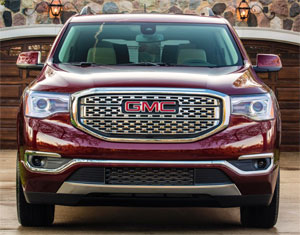 That 3.6-liter V6 is now optional and it’s also a new one, putting out both more horsepower at 310, and more torque at 271 lb-ft. Yet despite the bigger numbers, towing capacity falls from 5,200-lbs to 4,000, mostly due to the tidier dimensions.

With overall length cut 7–inches, and wheelbase shaved by over 6-inches, the new Acadia is far more garage-able. So, it’s now more midsize than full-size, looking very Dodge Durango-ish, and directly competitive with the Honda Pilot and Toyota Highlander.

Trimmer also helps the exterior appearance, now more modern and stylish; and, thankfully, far from a mini-me Yukon. Signature LEDs are standard on all models.

Denali trim still features an overdose of chrome, and a big grille for fully flaunting it.

Both engines come with a 6–speed automatic transmission, with a choice of front or all-wheel-drive.

Our V6 all-wheel-drive tester showed a noticeable lack of torque down low; but once you reach 4,000 on the dial, a surprising surge of power gets delivered rather abruptly. We hit 60 in 6.8-seconds; pretty quick for a 3-row family ute, and over a second quicker than before. We finished out the ¼ in 15.4-seconds at 92 miles-per-hour.

Shifting of the automatic transmission was very slow, with a noticeable lack of momentum each time a new gear was selected. With a short 119-foot stopping average from 60, and only minimal fade; the brakes were very confidence inspiring.

And if you zone out and need the Acadia to apply the brakes for you, it can do that as well, abruptly and consistently; provided you opt to add the Technology Package.

The optional all-wheel-drive system operates as front only if you chose, or leave it in auto. You can also select Sport, Off Road, and Trailer Tow modes.

Of course, the smaller size has taken a toll on interior space. But, you won’t really notice it much in first or second row seating. The 2nd row split bench, or Captain’s chairs, all slide fore and aft, as well as fold easily.

The third row is actually easier to get to, but noticeably tighter when you do. And, seatbelts are down from three to two. So, Acadia’s max body count drops from 8 to 7.

Maximum cargo capacity falls most of all, from 116.1 cubic-ft. to 79.0. Still all these aspects are competitive with Pilot and Highlander. 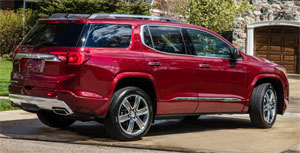 As for how it drives, well lighter is always righter; so it certainly feels more agile. But we’d avoid the I4 unless you’re a lone wolf.

V6 Government Fuel Economy Ratings with all-wheel drive are respectable, at 18-City, 25-Highway, and 20-Combined. We averaged a good 22.1 miles-per-gallon of Regular. For a reasonable Energy Impact Score of 16.5-barrels of oil burned yearly, while emitting 7.2-tons of CO2.

The 2017 GMC Acadia is clearly better in every aspect including size. While nothing about the Acadia blew us away with excitement, there’s a lot to like about it.

Yes, the smaller size means Acadia has given up its niche of being a true full-size truckin’ SUV alternative. And, only time will tell if the “going along to get along” strategy will work. But, for now, we think the Acadia will deliver more, from less, for more of you.