Once upon a time choosing a Honda was simple. They offered a small car, the Civic, and a not so small car, the Accord. Boy has that changed. From minivans, to crossovers, to pickup trucks, there is now a Honda body style for just about everyone. Plus they sell powertrains that run on gasoline, electric, and even hydrogen. Well now, Honda is adding two more choices that make full-lineup even fuller.

The stock Honda Accord is already quite fuel efficient for its size, and the updated 2017 Honda Accord Hybrid takes that mantra to a yet higher level.

This is a full hybrid with three drive modes. In the Hybrid setting, at slower speeds, its e-CVT transmission utilize battery power as much as practical, using the engine more as a charging power generator. Above 60 miles-per-hour however, the gas engine has priority. 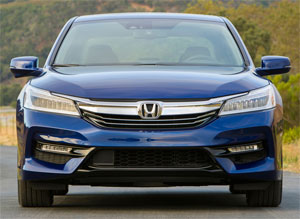 Plus, you can travel around 750-miles between fill-ups, thanks to a 15.8-gallon gas tank.

Compared to rival Toyota, the Accord Hybrid has more power than either the Camry Hybrid or Prius; while its fuel economy rating falls in between the two. Likewise, the Accord’s 13.5 cubic-ft. of cargo space puts it above the Camry, yet short of the Prius hatchback’s 27.4.

Hybrid cues on the outside are all in the details; they include blue tinting to lights, unique 17-inch wheels, and an aluminum hood.

The driving experience is traditional Accord, which means better than Camry, but no sport sedan. Like all Accords it is super solid, though it’s so quiet in EV-mode, that when the gas engine kicks in at higher speeds, powertrain noise becomes very noticeable as the CVT tries to catch up to engine speed.

Otherwise, the shuffle between power sources is silky smooth; with none of the jerkiness of some rivals. Even the re-gen braking has a very natural feel.

Now for those who are less concerned about maximizing fuel economy, and are looking for a roomier and more versatile Civic compact, Honda has got you covered there too, with the 2017 Honda Civic Hatchback. 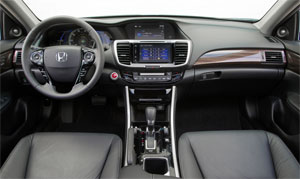 Riding on the same chassis as the Sedan and Coupe; the exterior design is of course unique, and oh so European. In fact it is imported from England.

Our Sport-trimmed tester had nicely bolstered cloth seats for those up front; and ample head and leg room in the rear.

We also found a manual shifter for the 6-speed transmission. Either it or a CVT comes attached to Honda’s 1.5-liter I4 Turbo that outputs 180-horsepower and up to 177 lb-ft. of torque. LX, EX, and EX-L trims come with a 174-horsepower version.

Max torque arrives fairly early in the rev band, we just wish there was a little more of it; though it sounds very aggressive.

We highly recommend the manual trans; with short and precise throws and clutch feel that would make Goldilocks happy.

If you’re looking for that fun to carry over to corner carving, well you’ll still have to wait for the Si; things are on the “comfortable highway daily driver soft” side here.

Steering lacks on-center feel, but is fairly quick and responsive. Sport trim comes with an 18-inch wheel and tire package, and during our early drive in Northern California, both tire and road noise became an issue after extended time behind the wheel.

As for hatch-enabled versatility, there’s up to 25.7 cubic-ft. of space behind the split-folding rear seats, that’s 10.6 more than the Sedan’s 15.1 cubic-ft. of trunk space. It maxes out at an almost SUV like 46.2 cubic-ft. with the rear seats folded.

As for the Civic Hatchback, it starts at $20,535; about a grand more than a base Sedan.

So, if you’re looking for a more fuel efficient 5-passenger family sedan, you’ll find that not only is the 2017 Honda Accord Hybrid now fully completive with the Camry Hybrid and even the Prius; but it raises the bar for no-compromise practical hybrid driving; only the upcoming Honda Clarity plug-in might take it further.

Taking Civic versatility further is the 2017 Honda Civic Hatchback. So, giving buyers more, more, and even more options; seems to be what Honda is all about. And clearly, that’s a winning strategy.