No doubt, the latest Honda civic is a winner. But it really became a winner in our hearts when Honda announced that new hi-output turbo SI and Type R were headed our way as well. And while the fast and furious crowd are surely salivating over the fact that we’re finally getting a real Type R here, it’s the more attainable SI that arrives first. And here’s why we’re so happy that that wait is finally over.

“Sport Injected” Honda Civics are hardly new, having in some form or another, been available off and on here in the States for over 30-years. But, since the latest 10th generation Civic is clearly the best one yet; does it follow that the 2017 Honda Civic Si is the best of its kind as well?

Well, for starters, our Si Sedan felt just as expertly put together as other Civic 4-doors. A Coupe is also available, but as of right now, no Si hatchback.

Both bodies get their own unique updates, the sedan’s a little subtler in nature. There’s a distinctive fascia with gloss black trim and larger air intakes up front, 18-inch split-spoke alloys underneath, and central-mounted hexagon exhaust tip in back. 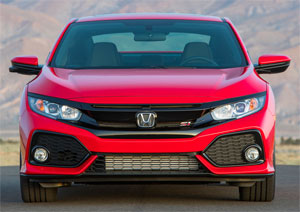 It’s a great looking package that earned more than a few “that’s a Civic?” questions from casual observers.

A 6-speed manual is the only transmission available. And, it’s a really good one.

As is the Si in general, provided you have the proper perspective. It’s not meant to be a no holds barred performance car. That’s for the Type R. Rather, the Si is a much more interesting daily driver.

And, it is a total pleasure to drive, not harsh or too “fast and furious”. And that’s where this car seems to have run afoul with many online haters. They clearly wanted more.

V-TEC snobs are also bemoaning this new car’s lack of an on/off power switch, but it’s time to move on people. For better or worse, we’re in a new turbo-4 era, and this engine puts out more power, and delivers it sooner, than any Si before it. 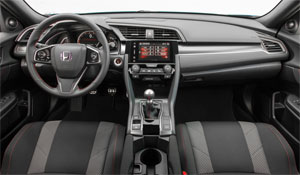 And allow Honda to introduce something the old 2.4 never had, it’s called mid-range torque, and there’s a decent amount of it here. Peak power is delivered at 2,100 RPM and it basically just stays there.

Things can get a bit noisy inside, otherwise it’s very comfortable, with nicely supportive sport seats.

Steering has good weight to it, and there is a thick wheel for getting things in motion.

This Si handles corners with ease; it’s nimble and light, and indeed it is almost 100-lbs. lighter than before.

The suspension has of course been “sport tuned”, complete with new adaptive dampers. As before, a limited slip differential is included. 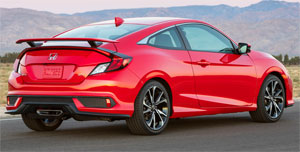 As for straight-line kicks, there’s decent grip at launch, provided you mind the revs. Torque steer was not a problem as we leapt to 60 in 6.5-seconds…about a half second better than the last 2.4.

Maintaining peak boost from the little turbo is a delicate job however, but Honda has included some shift lights in the gauge pod to help. Just wait a beat after you see them, and you’re golden. Shift too soon and there’s a definite lag in boost.

The shifter itself, is slick and precise, but we could sure use a little more clutch pedal feel. 15.2-seconds was our ¼ at 95 miles-per-hour.

The brakes are even more impressive. We averaged 102-feet from 60 with no fade, no dive, no drama. Here, pedal feel is excellent.

All that and it still delivers improved Government Fuel Economy Ratings; 28-City, 38-Highway, and 32-Combined on Premium.

Si trim may not come as feature-packed as some might like, but then pricing starts at just $24,775, for both Sedan and Coupe.

Clearly the base Civic has come a long way in recent years. Yet Honda has managed to take the 2017 Civic Si even further. Yes, it is the best Si yet. Still, as with many things new and improved, they lose a little soul along the way. But, don’t judge this Si until you drive it. And, we’ll bet, that if you love your current Si, you’ll want this one even more.