With battery powered EV’s now well on their way to being mainstream, you might wonder if hydrogen fuel cell powered electrics are still being pursued. Well, yes they are with Toyota, Hyundai, and now Honda fielding new showroom models. In Honda’s case, it’s the 2017 Honda Clarity Fuel Cell sedan, and it’s sure to make our look down the road ahead a lot clearer.

Back in 2008, we drove Honda’s vision for the hydrogen fuel-cell powered automotive future, the FCX Clarity. And, while everyone knew it was still a work in progress, it impressed us with its easy manners and effortless appeal.

The 2017 Honda Clarity Fuel Cell is clearly an evolution of the FCX; with the biggest improvement being the shrinking of the fuel cell stack itself, now small enough to be placed in the engine bay, along with the electric drive motor.

That leaves just two hydrogen tanks to find space for. A small one is located under the rear seats, while a larger one sits just behind them. 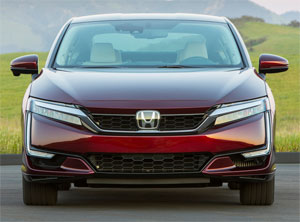 Output is 174-horsepower and 221 lb-ft. of torque.  But best be frugal with it, as unless you live near one of the few hydrogen refueling stations in California, you don’t want to exhaust the still impressive 366-mile range too quickly. For the record, that’s more range than any battery powered EV you can buy today.

During our early drive time around Santa Barbara, California; the Clarity Fuel Cell drove mostly like a pure-EV, but with power delivery that feels more linear, more like a traditional combustion powertrain. Likewise, the regen braking is not as aggressive as a battery electric, even when dialed up in sport mode. Yes, there is a sport mode.

And you can definitely detect Clarity’s 4,134–lbs. through corners, but it never feels sloppy. Rather, Honda smooth and mostly quiet, save for a few awkward whirring and air-flow noises you haven’t heard before. Honda claims to have quieted down the drive motor significantly from the FCX Clarity. 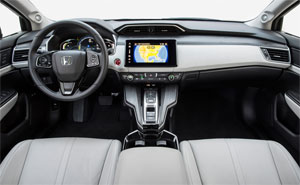 The cabin is quite nice looking; not too futuristic or even that much different from say… a Civic. But things do feel a little tighter inside, mostly because of the wide and protruding center console.

Not so in the rear seats where, with no big battery to hide, there’s plenty of both leg and head room and true 3-across seating.

Even with a hydrogen tank eating up some trunk space, there’s still a good 11.8 cubic-ft. of it.

The exterior may not appear as far into the future as it once did, but it’s clearly not your everyday sedan either.

Along with the usual LED headlights and daytime runners, the Clarity has a host of air cheating elements such as rear “air curtains”, keeping wind off the wheels, and the world’s first “air curtain ducts” on the rear doors.

As for size, its 108.3-inch wheelbase is exactly 2.0-inches longer than a Civic Sedan.

And just in case you don’t live near a hydrogen pump, Honda has announced that a plug-in hybrid, as well as their first pure-EV will soon join the Clarity lineup.

We know the current market for the 2017 Honda Clarity Fuel Cell is tiny, and only in California. But in a larger sense, we’re not convinced that this wave of the future will ever crash upon our shores, as we are much further along a pure-EV path. But, Honda is not concerned with such trivialities, they’ve got innovating to do, and if we ever do get that “Hydrogen highway”, Honda, and the Clarity Fuel Cell, will be at the head of the lane.