The 2006 Honda Ridgeline was a true crossover. An SUT…sport utility truck…that provided car-like handling and comfort, in a pickup style package. But while capable of performing just about any light-duty family task, that Ridgeline didn’t sell as well as Honda hoped. So now, after a two year hiatus for rethinking, an even more truck-like ridgeline is back on the scene. Let’s find out how it delivers.

It’s fitting that we drove this all-new, more truck-like 2017 Honda Ridgeline in Texas, the truckiest of all states; near San Antonio.

But not to worry, as despite a more traditional crew-cab look, all the highlights that set Ridgeline apart from other light-duty trucks are still here; like a dual-action tailgate, a larger water-tight In-Bed Trunk, and of course the very car-like driving demeanor.

New, in case you missed the Super Bowl ad, is an in-bed audio system for cranking tailgate tunes.

Now we still think the Ridgeline is an ultimate crossover, Honda insists it’s a true midsize pickup. And it does measure up well, especially now that bed is larger; over 5-inches wider and 4-inches longer. 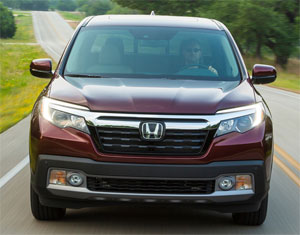 It is the only smaller truck that can carry 4x8 building materials between the wheel wells. Granted, the floor is raised and the box sides are shallow, but that also makes it easier to reach in to grab smaller cargo.

There’s AC bed power available too and payload capacity is over 1,500-lbs.

We came close to maxing that out, and while we clearly knew there was a trailer behind us, the Ridgeline never felt overworked.

The i-VTM4 torque-vectoring all-wheel-drive system also comes from the Pilot; but it, as well as most of the suspension and sub-frame, have been beefed up for more severe duty.

We put it through its paces, and only wished for a bit more ground clearance. It performed great in tight situations; without the traditional 4X4 binding issues when the wheels are cranked all the way.

And at the risk of being reported to the House Un-American Activities committee, a front-wheel-drive only Ridgeline will be available for the first time. 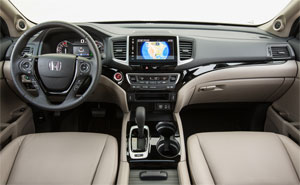 There’s loads of people space, compared to Toyota Tacoma and Nissan Frontier, and even to the GM pair of Colorado and Canyon.

That holds true with crossover utility space in rear seat as well, but although the seats fold up, the doors don’t open quite wide enough to make bulky cargo loading easy.

The cabin is certainly much more inviting than before and less utilitarian in all trims. Dash and console layout are very similar to the current Pilot, but not an exact copy, with plenty of small item storage.

Uni-body means no full-frame underneath, and a ride that continues car-like. But it does have a little more big-truck softness; with some nose dive under hard braking and nose-up posture when you nail the gas with a loaded bed.

The driving position is the most car-like of any rival, and steering feel is very tight. Honda has come to play for real this time!

We’re big fans of the new Ridgeline’s more traditional pickup styling. Unlike before with the single side panel, there’s now a clear definition of where the cab ends and the bed begins. It looks better, and body side repair bills will be much cheaper.

While the Ridgeline bears some resemblance to the Pilot up front, the sharp lines down the sides remind us more of a Volkswagen product.

There is a much tougher presence. Even a tow hitch is standard equipment!

Fuel Economy is better than any competing V6, with Government Ratings for four-wheel-drive of 18-City, 25-Highway, and 21-Combined.

Pricing starts at a fairly high $30,375 for a 2-wheel-drive RT, and rises through a host of trim levels to the Black edition all-wheel-drive, starting at $43,770.

While not an enduring sales winner first time around, we’re glad to see the 2017 Honda Ridgeline back in the fold. And, now that it looks a lot more like the rest of the pickup trucks on the road, we think a lot more truckin’ families will do more than just look.