Gasoline-electric hybrids have been on our streets for almost two decades now; but not one has been quite up to going head-to-head with the benchmark Toyota Prius. Well, Hyundai means to change that with an all-new Ioniq hybrid. A compact five-door that is clearly designed to out-Prius Prius. So, let’s crank it up and see.

Despite a wealth of contenders over the years, the Toyota Prius has retained its spot as the pinnacle of hybrids. This 2017 Hyundai Ioniq, isn’t exactly a Prius copy, but it’s pretty darn close.

There will actually be three Ioniq versions, as this traditional hybrid will be joined by a plug-in variant as well as a full EV in the near future; all based on a dedicated hybrid platform shared with the Kia Niro wagon. Though thankfully, unlike Niro, the Ioniq doesn’t portray itself as an SUV.

The hybrid powertrain starts with a 1.6-liter I4 gas engine rated at 104–horsepower and 109 lb-ft. of torque. Combined with a 32kW electric motor, total output is 139-horsepower. 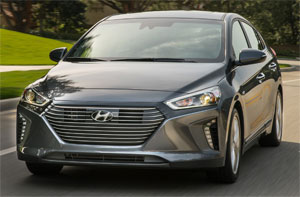 A small 1.6-kWh battery resides under the rear seat, avoiding any loss of cargo space.

While eco-friendliness is still important to many people, with fuel prices staying relatively low; the Ioniq will need to appeal to more than just the greenies, in order for it to be successful.

Well, its DCT transmission really aids in that regard, helping it feel sportier than rival hybrids, and Prius in particular; delivering quick shifts and allowing you to hold gears when spiritly cornering. And it will do that, although ride quality was clearly still a priority.

Overall hybrid system operation and engine engagement is not quite as seamless as the Prius; it has great pickup however, and the seats are far more comfortable.

And indeed it has a sporty feel inside as well, all in an attempt to make you forget you’re actually in a hybrid; though there are plenty of displays to remind you otherwise. 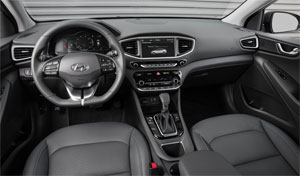 As far as interior room goes, numbers put it very similar to the Prius; a little more here, a little less there. Most notably, the rear seats feel much roomier to us.

Tech interface is easy to master, and plenty of knobs and buttons remain.

Much like the Prius, its hatchback cargo area provides a good amount of space and folding seatback versatility. Capacity is slightly higher here, at 26.5 cu-ft.

Proportions and 5-door style are also very similar, including the exact same 106.3-inch wheelbase. Yet the slick-looking Ioniq doesn’t seem to scream eco at all.

It proved fairly slick at our test track as well. Through the cones, there’s plenty of understeer, but the trip was much quicker than we expected. There’s a manageable amount of body roll, good weight to the steering, and decent balance; all allowing you to easily find a comfortable groove and push pretty hard. 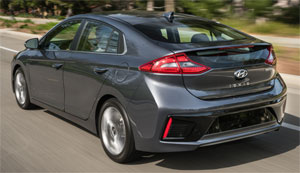 Government Fuel Economy Ratings, at 55-City, 54-Highway, and 55-Combined, best the Prius’ 52-Combined. But our average of 53.1 on regular didn’t quite match those numbers. Much like the Prius, there is a more efficient de-contented version, the Ioniq Blue, which ups the Combined rating to 58.

The Energy Impact Score is naturally a very good one; just 6.0-barrels of oil used and 2.7 tons of CO2 emissions yearly.

The 2017 Hyundai Ioniq is not just a very nice and efficient hybrid, but a very useful car as well. And despite current fuel prices, we see a healthy market for this hybrid. The upcoming, pricier PHEV and EV will be a tougher sell, no doubt. But the fact that Hyundai is unleashing all three, is proof they have a long-range strategy in place. In many ways, Hyundai has beaten the Prius at their own game; now they just need to have buyers notice.