It looks like the lines between hatchback “car” and crossover “utility vehicle” have finally been obliterated entirely. As proof we present the Infiniti QX30, the latest addition to the growing compact luxury CUV market here in the U.S., but basically the same vehicle is also known as the Q30 hatchback in Europe. And that’s just the beginning of the blurred lines for this this dynamic little 5-door hatchback…sorry…crossover.

Yes, this 2017 Infiniti QX30 is many things to many people. But what really matters here, is that it arrives at a perfect time; when Americans can’t seem to get enough small luxury crossovers.

Oh, and for those of you who have been bemoaning the fact that you can’t buy a Mercedes-Benz A-class hatchback here; well, now you can, because that’s what’s under the QX30’s way more dynamic bodywork.

Yes, this is the first vehicle to emerge from the Renault/Nissan/Daimler partnership announced last year. And though the overall stance and silhouette are very similar to the Mercedes-Benz GLA crossover; it’s much better looking, if you speak Infiniti’s design language like we do, we’d pick this one over the GLA. 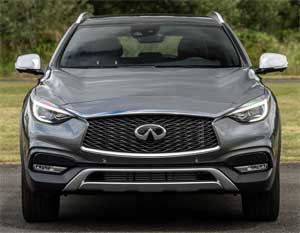 There’s a decent 8.0-inches of ground clearance, same as the GLA. Unless of course you opt for front-wheel-drive only Sport trim. Which to confuse things further, really is the Q30 also known as  the A-Class hatchback, with its hard parts just 6.1–inches above the pavement. It also comes with some minor unique exterior elements.

Infiniti engineers had their way with the suspension of course, so it rides nothing like the GLA. It felt stiffer initially, but better the more time we spent with it; no suspension altering drive modes to be found here.

It drives lively, not economy car-like at all; straddling the comfort/capability line almost perfectly. Leaning slightly more towards the tougher end than some other “sporty crossovers”, which is no longer a weird thing to say. Yet it remains exceptionally quiet.

There’s good pick-up from the standard 2.0-liter turbo I4 and 7-speed DCT transmission, both of which come from Mercedes; as does the key to get things started. Software for managing all of it, however, comes from Nissan, still the overall feel is very Benz, and ratings are the same at 208-horsepower and 258 lb-ft. of torque.

The Intelligent all-wheel-drive system is also a version of Benz’s 4MATIC, which can send as much as 50% of torque to the rear wheels when slip is detected.

There was noticeable turbo-lag, and an overall softer launch than when we had the GLA, but the resulting 0-60 time was still not bad at 6.8-seconds. 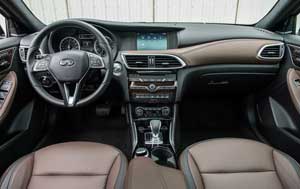 As is usually the case, if you’re looking for the best outcome, just leave it in auto, as manual shifting was slow to respond. Still, there was a nice whoosh of sound coming from the turbo-4 as it powered us to the end of the ¼-mile in 15.1-seconds at 92 miles-per-hour.

Through the cones, there’s a playful nature; with minimal amounts of both under and oversteer. Suspension feels taut, and it remained very flat.

Infiniti also tweaked the steering to their liking, but they did it no favors as far as we’re concerned. It’s loose feeling on-center, and there’s an awkward heft when making inputs.

A 110-foot stopping average from 60 is very good, and stops were both smooth and stable. But after about 4-runs, fatigue set in and brakes started to fade.

Inside the QX30’s cabin is where things depart most from its Mercedes-Benz roots. There are still some GLA controls on the dash, but things appear much more inviting. Material quality is quite good.

Infiniti owners who aren’t familiar with the GLA will enjoy the refreshing new take on layout, as well as find the fit-and finish they are used to. The most obvious Benz element is the door mounted seat control; but they work so well, we’re glad Infiniti left them alone.

Both central controller and shifter are unique, with a nice obvious Park button.

There’s a comfortable seating position for the driver; but visibility is very poor, with thick pillars in back as well as a very small rear window.

Government Fuel Economy Ratings for all-wheel-drive are 21-City, 30-Highway, and 25-Combined; so our 30.7 miles-per-gallon of Premium average was excellent.

Still there’s only an average Energy Impact Score of 13.2-barrels of annual oil consumption with CO2 emissions of 6.0-tons.

With many different QX30s to choose from, $30,945 to start seems reasonable, considering it’s about 2-grand cheaper than a GLA.

So, while the Mercedes-Benz GLA came to market earlier, don’t think of this 2017 Infiniti QX30 as a re-badged Benz, but a cooperative effort along the lines of Toyota and Subaru with the 86 and BRZ. It is highly competitive with the current influx of cute utes, as well as a perfect step up for open-minded hatchback buyers. We predict this international coalition will be quite successful.