What was the Infiniti JX is now the QX60. And since a lot more than a name change has taken place since we last drove, what has long been one of our favorite luxury 3-row crossovers, we decided to check back in to see if all of those changes make us like the qx60 more…or less.

No matter what name it goes by; since it arrived in 2013 the QX60 and its predecessors have been one of Infiniti’s best-selling models. But continued success is in no way a given, and Infiniti is taking steps to keep the QX60 trending.

2016 saw a retuned chassis that included new shocks and springs, in an attempt to take some of the float out of the ride and make it a little more responsive in corners. Steering was also updated with more feedback and quicker response.

The results are noticeable and quite nice. It doesn’t feel like a completely new vehicle, just a better version of a vehicle that we liked very much to begin with. 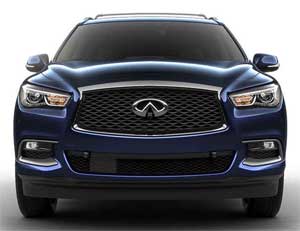 Still, at the track we found plenty of body roll; as well as a stability system that was very eager to chime in at the first hint of loss of grip.

It still feels big and wide compared to many luxury crossovers, very similar to the Honda Pilot. And indeed it looks more imposing now as well, with a redesigned double-arch grille and new lighting up front.

Interior revisions for ‘16, were relatively minor; with just some upgraded connectivity and added safety features including Forward Emergency Braking.

All of that was followed by even bigger updates for ’17; a more powerful engine along with a new 8.0-inch InTouch information display screen in the gauges, and bigger screens for rear entertainment.

So, of course we hit the track to see if the added performance results in a faster QX, and indeed it does. Our ’17 got to 60 over half a second quicker than the ’16 at 7.4-seconds.

Power comes on strong as RPMs build, and our ¼-mile time was also half a second faster at 15.7-seconds at 92 miles-per-hour. 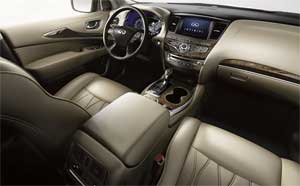 The CVT does an admirable job of acting like a real automatic, by stepping through simulated gears, eliminating the usual constant drone of typical CVTs.

The layout may be getting a little long in the tooth; but there’s no argument, it remains one of the most functional setups out there.

Front seats are simply terrific, and we like the fact that no matter how high you option up the QX60, you can still get a 2nd row bench and aren’t forced to upgrade to Captain’s chairs.

And that sliding 2nd row still allows for great access to the 3rd row, though space once seated, is not as plentiful as some rivals. 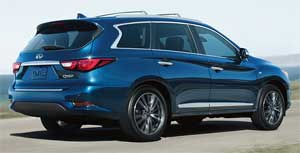 The Energy Impact Score is an average one at 15.0-barrels of oil used yearly with 6.8-tons of CO2 emissions.

Though it’s been around for quite a while now; thanks to seemingly constant updates the 2017 Infiniti QX60 remains a favorite of ours, despite a huge influx of luxury 3-row crossovers since it first arrived. Proof that refining a winning formula is always easier than starting from scratch.