The Jaguar brand always seemed to be in some type of turmoil, going all the way back to its 60’s heydays. Boy has that changed, these days it appears to have a very solid footing under Tata ownership, producing a string of very impressive vehicles. Notice we didn’t say “cars”. For behold, the F-Pace, Jaguar’s first crossover utility, a “cat” designed to really stir up the market.

Let’s get this straight right out of the box; a Jaguar utility vehicle, as implausible as it may sound, is not really a stretch. After all, Jag’s been partnered with Land Rover since Ford bought the pair in 2000. And during that time, SUVs from luxury brands have gone from a rarity to a necessity. So, this 2017 Jaguar F-PACE shouldn’t be a surprise.

And truth be told, it would have made a fantastic Land Rover. Be that as it may, there are plenty of SUV and crossover sales to go around, and somehow Jaguar resisted the urge to just rebadge a Range Rover, by basing the F-PACE on their own XE/XF sedan chassis. Good call on their part, as it makes it truly unique.

Both the structure and most body panels are aluminum of course, and it looks fantastic, drawing a crowd wherever we parked it. The familiar grille tells everyone what it is; while the 20-inch wheels, with big brakes behind, on this F-Pace S, clue everyone in on its performance potential. Up to 22-inch wheels are available. 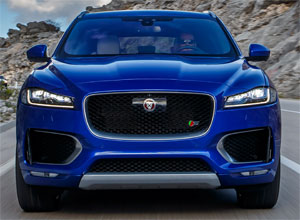 The rear continues the theme established by the F-TYPE, particularly with the LED tail lights. But all-in-all, it looks exactly like you might expect a Jaguar crossover to look like.

All F-PACE’s get an 8-speed automatic transmission with all-wheel-drive.

Behind the wheel, there’s a very familiar Jaguar feel, which is awesome. Smooth and willing. In similar fashion to BMW, Jaguar has established a tremendous brand consistency throughout their lineup.

The F-PACE is also one of those rides that feels faster than you’re expecting, even when you know it’s going to be fast.

F-PACE operates on rear-wheel-drive until traction is lost, at which time in can send 50% of the power forward. Adaptive Surface Progress Control is autonomous driving for off-road, designed for keeping you from hurting your Jag on steep hills or slippery conditions. That’s technology we can get behind; as no doubt it comes from Land Rover. Ground clearance is a fine 8.4-inches. 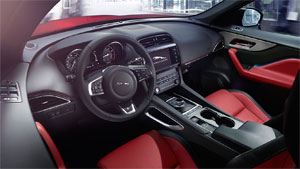 Taking full control ourselves, for straight line sprints, this F-PACE S put plenty of power down; leaping off the line to 60 in just 5.2-seconds.

Gear changes were brisk, the exhaust sounds exotically loud, and in 13.6-seconds we were at the end of the 1/4 mile travelling at 103 miles-per-hour.

Steering was light, tight, and nimble; and overall it handled extremely well. There was bit of expected understeer, but it remained very flat through our cone course.

On the inside, the F-Pace layout is similar to the XE sedan, but materials are a welcomed step above. And we’re glad to finally see an infotainment system worthy of the brand, Jag’s new InTouch Pro features a 10-inch tablet-like interface.

The expected Jag elements, like the pop-up rotary shifter and TFT gauges are present, but there’s plenty of utility as well, with decent rear seat people space, and 33.5 cubic-ft. of seat-up cargo room. 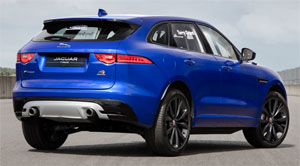 Government Fuel Economy Ratings are 18-City, 23-Highway, and 20-Combined. We averaged a good 21.7 miles-per-gallon on Premium. The Energy Impact Score is about average, with 16.5-barrels of oil burned and 7.4 tons of CO2 emitted annually.

Get the diesel if you want better, it rates 29-mpg Combined.

With the F-Pace, Jaguar now has the broadest product line in their history. And, there is much to like about their first luxury-ute effort, including a base pricing that is quite low at $41,985. And that’s for the diesel. This F-PACE S starts at $57,695; certainly not awful for a vehicle of this caliber.

So, not only is the F-PACE a great mid-size luxury crossover utility vehicle, it’s a great Jaguar! It handles on par with anything similar from Porsche or BMW; for less than the price of a Tahoe. So, get used to seeing plenty of these cats prowling around stirring up the luxury utility market. The 2017 Jaguar F-Pace is truly one of the most outstanding vehicles we’ve driven this year.