The last Jaguar compact sports sedan we tested was the X-type. Don’t remember it? Well, that’s probably a good thing, as that Ford Contour based front-driver never made a serious impact here, or anywhere else for that matter. Just too much a parts bin car. Now, Jag is stepping back into that segment, and stepping up, with what may be a much more impactful car. This is the XE.

And, awaiting you inside this compact sport 4-door, is the familiar Jaguar theme of late, along with plenty of the accustomed switchgear.

And that’s great. But, the drab and unappealing space it fits into is not. Much of the dash real estate goes unused. There is nothing for the passenger to look at except lots of pebbled plastic and a big airbag logo.

The XE really needs some extra trim to brighten up the space, and reinforce its upscale kinship to other Jaguars, and frankly, look competitive to other rear-drive European sport-luxury sedans.

Now that that’s out of the way, we’ll get to what we love about the XE; and there’s plenty of it. Starting with what’s under the hood. 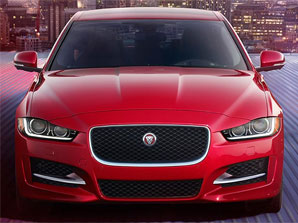 Here, its Jaguar’s lovely 3.0-liter supercharged V6; boasting 340-horsepower and 332 lb-ft. of torque. A 2.0-liter diesel is also available. Both are equipped with an 8-speed automatic transmission, and you can get all-wheel-drive with both.

A rear-drive only, gasoline-fed 2.0-liter I4 model is offered as well.

At the track, our rear drive V6 did do some battle with wheel spin at launch, but then got off to a very nice 4.9-second 0-60. Power never deviates, with enough midrange torque for days; or at least for a 13.5–second 1/4-mile at 105 miles-per-hour. Lovely!

Automatic shifts are quick and seamless; all accompanied by a subtle exhaust note reminiscent of, but nowhere near as fierce as, the F-type.

It was easy to keep the speed up through our handling course. If we didn’t already know that steering was electric, we’d have a hard time guessing; very responsive, if down on true road feel.

Dynamic mode tightens and quickens everything up, helping to improve feel; though we found throttle response now touchy, and it was easy to initiate too much oversteer.

A 112-foot average stopping distance from 60, is quite good; as was pedal feel and overall stability.

On public roads, near posted speeds, the XE drives wonderfully. It’s a highly capable back road blaster, with a tremendously smooth and placid nature.

The ZF-sourced 8-speed transmission is well-sorted, and also well-matched to this V6; we only experienced some occasion jerkiness in stop-and-go traffic.

With every setting at its sportiest, the XE does a decent 3-series impression, but it feels more at home kept in softer settings.

Compared to rivals such as the 3-Series, C-Class, A4, and ATS; the XE is far more gorgeous to look at.

The proportions look just right, there are enough creases and angles to keep it interesting, and the coupe-like, thick C-pillar profile is certainly consistent with the segment. So, any compromise to rear visibility is a concession we can live with.

Like most recent Jag’s, there are plenty of stylish details that remind us of the now haloed F-type.

Plenty of tech features are available too, and you can activate the rear camera almost any time; which we feel is a better solution than Cadillac’s rearview mirror cam. 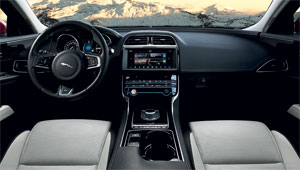 And while some may think we were a bit harsh in our earlier description of the XE’s overall interior environment; we have only praise for Jag’s latest InControl touch system that manages it. It’s logical, and responds quickly to your inputs. A huge step up!

A host of advanced safety systems are available for ’17, including autonomous braking; but our tester wasn’t so-equipped.

Government Fuel Economy Ratings for a V6 rear driver are 21-City, 30-Highway, and 24-Combined. Our average was a better than expected 25.8 mile-per Premium gallon. That’s an Energy Impact Score of 13.7-barrels of annual oil consumption with CO2 emissions of 6.1-tons.

The 2017 Jaguar XE continues the brand’s streak of all-around performance winners. Plus, on the outside, it’s very easy on the eyes. But, it’s going up against a sea of excellent alternatives with a lackluster interior that is no help. Still, and very much unlike the X-type before it, there’s a lot to like and admire about the XE, and it clearly deserves to be part of any luxo-sport sedan conversation.